Latest Issues in Complex Arbitrations Discussed at Law School Conference
Public Affairs, 212-854-2650
New York, March 31, 2011--As arbitration takes on an increasingly larger profile in international law, so do the many issues that inform such proceedings, where the fate of many sizable contract disputes are decided.
The intricacies of those issues were the focus of the second-annual Columbia Arbitration Day, held March 25 at the Law School. 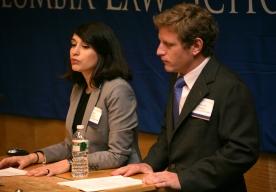 Sponsored by the Columbia International Arbitration Association and co-chaired by Edith Aupetit '11 LL.M. and Ignacio Zapiola '11 LL.M. (right), the event attracted some of the world’s leading arbitrators, lawyers, judges, and academics to discuss cutting-edge issues involving complex arbitrations. Those include proceedings that involve multiple parties and contracts, as well as parallel proceedings  across different jurisdictions. 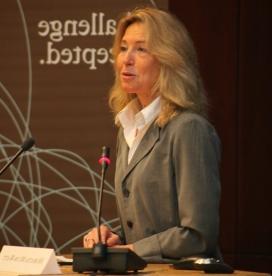 Courts as dispute-solvers and as law-makers have clearly lost their monopoly in the global economy,” said Horatia Muir Watt, (lef) the James S. Carpentier Visiting Professor of Law, who gave the conference’s keynote address. “There is clearly a global market for judicial services in which private service-providers are powerful players.”

Also speaking at the event was George Bermann (below, third from left), the Jean Monnet Professor in EU Law, Walter Gellhorn Professor of Law, and one of the world’s leading experts on arbitration. Bermann updated the conference with an update on the U.S. Restatement on International Commercial Arbitration project.
Bermann is the Reporter for the Restatement, which endeavors to resolve conflicts between domestic laws and international arbitration protocols. Bermann began the project about three years ago, and it is still evolving, he said. 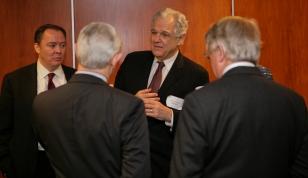 “It’s a really good opportunity to look comprehensively at an entire field of law,” Bermann said.
Columbia Law School, founded in 1858, stands at the forefront of legal education and of the law in a global society. Columbia Law School joins its traditional strengths in international and comparative law, constitutional law, administrative law, business law and human rights law with pioneering work in the areas of intellectual property, digital technology, sexuality and gender, criminal, national security, and environmental law.
Visit us at www.law.columbia.edu
Follow us on Twitter http://www.twitter.com/columbialaw