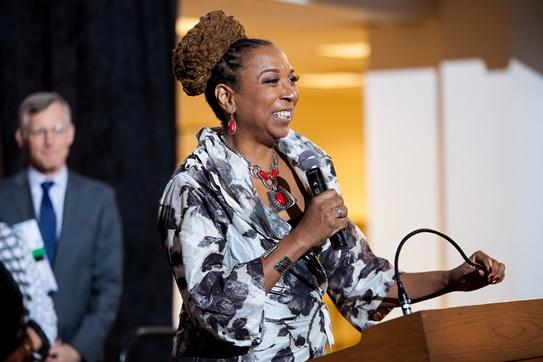 New York, February 16, 2016—Columbia Law School Professor Kimberlé Crenshaw has received the Outstanding Scholar Award from The Fellows of the American Bar Foundation. The annual prize recognizes exceptional scholarship in the law or in government. Crenshaw is the first woman of color to get the honor.

Crenshaw has been a pioneering scholar in the field of critical race theory, and her original scholarship on intersectionality has been deeply influential for recognizing how such interrelated identity categories as race, gender, and class result in overlapping forms of discrimination. She is the director of the Center for Intersectionality and Social Policy Studies at Columbia Law School and the co-founder and executive director of the African American Policy Forum. She also teaches at UCLA Law School and is the Centennial Professor at the London School of Economics Gender Institute 2015-2018.
Her work on race and gender influenced the equality clause in the South African Constitution, and in 2001 she authored the background paper on race and gender discrimination for the United Nations' World Conference on Racism, where she was instrumental in getting gender included in the conference’s final declaration.
An advocate for a gender-inclusive approach to racial justice interventions, Crenshaw has led the “Why We Can’t Wait” campaign. Last year she co-authored the critically acclaimed reports, “Black Girls Matter: Pushed Out, Overpoliced and Underprotected” and “Say Her Name: Resisting Police Brutality against Black Women.”
She lectures and publishes widely. Her articles have appeared in such scholarly journals as The Harvard Law Review, The Stanford Law Review, and the National Black Law Journal, as well as in more mainstream media outlets like The New York Times, The Washington Post, The Nation, and Ms. Magazine. In addition to receiving numerous accolades in academic settings, Crenshaw was featured in Ebony’s Power 100, and she topped Ms. Magazine’s list of “Feminist Heroes of 2015.” Last year also brought recognition as one of Harvard Law School’s “Women Inspiring Change” and Diverse’s “Top 25 Women in Higher Education.”
“I'm the first to admit that I am not your typical scholar,” Crenshaw said in her acceptance speech at the ABF’s 60th annual awards banquet on Feb. 6 in San Diego. “I love ideas, but I have never loved them as abstract flights of indulgence, but as ways of experiencing, contesting, engaging a world that has only in the past half century or so taken seriously a commitment to righting civil wrongs.”

Crenshaw is surrounded by friends, family, colleagues, staff, and former students who traveled from both coasts to
join the celebration.

The full text of Crenshaw’s remarks are available here.