Many of today’s most dynamic business and social enterprises—from YouTube to Google’s efforts to digitize the world’s books—are governed by the contours of the fair use doctrine. Yet despite its enormous importance, there have been few opportunities for direct debate on the proper alignment of the law with the rapidly changing economic and social realities that it governs.

That debate was the focus of a standing-room only conference sponsored by Columbia Law School’s Kernochan Center for Law, Media & the Arts and The Columbia Journal of Law & the Arts on February 8. The event, titled Fair Use: ‘Incredibly Shrinking’ or Extraordinarily Expanding, attracted many of the nation’s leading copyright scholars to analyze the way the fair use defense is considered by the federal courts, how the law should (and should not) be applied and how the law should be amended to balance an array of competing economic and social interests.

Keynote speaker Professor Paul Goldstein ’67 of Stanford Law School questioned the usefulness of any grand theory of the fair use doctrine, which he called the “great white whale of American copyright law.” He also rejected as too narrow the traditional static application of the four fair use factors defined by Section 107 of the Copyright Act. According to Goldstein, the mechanical application of those factors has caused a sharp divergence between the law and the real world.

“Attaching primacy to the statutory factors is the source of the problem,” he added.

The scope of the doctrine should be primarily defined by the context of the case before the court, Goldstein argued. For example, in cases involving software, the statutory factors are meaningless unless the realities of the software industry are carefully considered.

Similarly, the factors will apply to a parody case in a completely different way. “The four factors matter only to the extent they respond to the peculiar characteristics of parody,” he said. 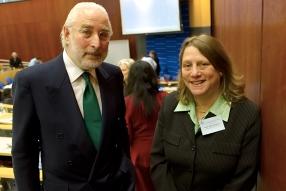 In the first panel, What is Transformative Use?, participants discussed when courts should decide that an original work has been sufficiently transformed so that the derivative product qualifies as a “transformative work” under the fair use doctrine.

According to Professor Laura Heymann of William & Mary School of Law, transformative use should be in the eye of the beholder. “Courts are approaching transformative use from the wrong perspective,” she said. “The question should not focus on the author, but on how the reader engaged with the copyrighted work.”

Professor Rebecca Tushnet of Georgetown Law Center took the argument a step further, proposing that communities of users of copyrighted work should establish their own fair use guidelines similar to those that have been established by documentary filmmakers. According to her, community-sponsored guidelines facilitate “organized consideration of the practices and history of creative works in a particular category,” which in turn helps users predict whether their use of copyrighted information falls within the scope of the fair use defense.

Professor R. Anthony Reese of the University of Texas School of Law focused his remarks on how the law should treat transformative use that creates a derivative work. If fair use is expanded to include transformative content, then the work of another creator could erode the author’s right to prepare derivative works himself, he said.

The second panel, The Statutory Factors Reconsidered, analyzed how four statutory factors set forth in Section 107 might be amended to provide users of copyrighted works with greater certainty of not falling afoul of fair use doctrine. Professor Barton Beebe of Cardozo School of Law presented empirical research from a forthcoming paper that examines how courts in more than 300 judicial decisions have applied the factors. Among the findings: When three of the four factors are present, judges generally rule in favor of fair use, Beebe said. “Judges don’t need a 4-0 outcome to find one way or another.”

Robert J. Kasunic, principal legal adviser at the U.S. Copyright Office, argued for a renewed emphasis on the nature of the copyrighted work in the fair use analysis. In particular, he noted this allows courts to consider the markets for the work, thereby testing the fundamental constitutional question of the author’s incentive to publish.

Professor Joseph Liu ’94 of Boston College School of Law proposed that the four factors be reduced to two: (1) the purpose of the work, and (2) the market impact of the second work on the first. While qualifying his theory as preliminary, Liu made the case that a two-factor analysis might ultimately provide better guidance to users of copyrighted works. 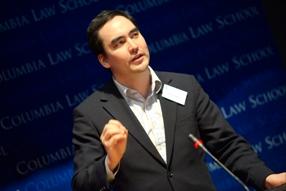 Members of the final panel considered the types of economic and cultural activity that falls outside the confines of fair use yet are nonetheless allowed, or at least “tolerated,” by copyright holders because they benefit from it. To illustrate a tolerated use, Professor Tim Wu of Columbia Law School dissected infringing elements of a Web site devoted to the television series “Lost.” Despite its violation, the site has been tolerated by ABC, which has even purchased advertising on it.

“Copyright is a Sword of Damocles hanging over activities like the ‘Lostpedia’ Web site,” observed Wu at the Panel Beyond Fair Use. He advised copyright owners to establish and publish guidelines for use of their work in order to allow such beneficial uses to flourish.

Randal Picker of the University of Chicago Law School disagreed, arguing that an over-expansion of fair use could erode the value of an author’s rights in derivative works and consequently erode the author’s incentive to make incremental investments in secondary markets. In a lively exchange following Picker’s remarks, Wu took issue with that concern, arguing that fair use access to copyrighted work promotes more efficient innovation than ownership of derivative works.

Professor Jessica Litman ’83 of the University of Michigan Law School defended the interests of readers, viewers and listeners in altering and adding to copyrighted works.  “Technology enables users to engage new works of authorship in creative and productive ways,” she said. “That should be seen as an activity to be encouraged rather than controlled.”

The event included a moment of silence for Professor John M. Kernochan ’48, the namesake of the Center, who died this past fall.

Charles von Simson is a copyright lawyer in Manhattan.