Katharina Pistor Cracks the Legal Code of Wealth and Inequality

In her new book, “The Code of Capital,” the professor of comparative corporate law and legal institutions explores the fundamental role of lawyers in creating the rights and structures that help the rich get richer.

“I don’t want to accuse or indict lawyers,” Professor Katharina Pistor was saying on the day last month when her new book, The Code of Capital: How the Law Creates Wealth and Inequality, was published by Princeton University Press. “But I want people to understand the centrality of law for capitalism, both historically and certainly in the contemporary world.”

Pistor, the Edwin B. Parker Professor of Comparative Law and director of Columbia Law School’s Center on Global Legal Transformation, explains that capital, which for centuries was synonymous with real property, has always been a legal construct. “Even for land, it was never about a piece of dirt but about the right you have to land over others,” she says. “But increasingly, intellectual property rights and other nontangible assets, like financial instruments and data, are the major sources of wealth today. These things are themselves a product of the law; they don’t exist outside the law, so that means that lawyers are basically in the business of minting capital for their clients.”

Ordinary assets—land, private debt, business organizations, knowledge—are transformed into capital that in turn creates more wealth, she explains, by legal modules: contract law; property rights; collateral law; and trust, corporate, and bankruptcy law. Private attorneys use these modules to “code” assets, which are then protected by the legal rights that states have bestowed on capital. “Trusts, for example, are one of the most ingenious inventions of all time,” says Pistor. “The beauty of the trust is you can basically separate assets by law. You just say this is yours and this is somebody else’s and thereby creditors cannot get beyond the legal barrier that you have created.” 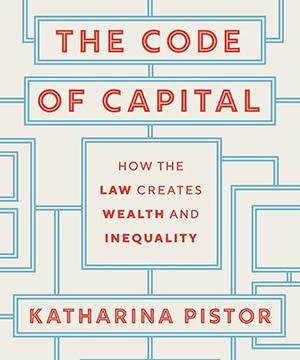 The Privileges of Capital

In conversation on the subject, Pistor maintains an intellectual equanimity, although she is frustrated by the status quo. “Law is not just this neutral thing, and we just allocate property rights and the market does the rest,” she says. “We’re creating new property rights and other privileges in the law all the time.”

Legal privilege has its own rewards. “The wealthy often claim special skills, hard work, and the personal sacrifice they themselves or their parents or forefathers have made as justifications for the wealth they hold today,” she notes. “These factors may well have contributed to their fortunes. Yet without legal coding, many of these fortunes would have been short-lived. Accumulating wealth over long stretches of time requires additional fortification that only a code backed by the coercive powers of a state can offer.”

Pistor began formulating The Code of Capital in 2007, as the global financial system began to unravel. Her research revealed to her that the core institutions of private law “had powered the expansion of markets in financial assets, but, as it turned out, they were also key determinants in their undoing,” she writes in her preface. “[W]hat had started as an investigation into global finance had led me to the fountain of wealth, the making of capital.”

While Pistor characterizes her book as primarily “diagnostic,” she is not agnostic. “Tracing the root causes of inequality has become critically important not only because rising levels of inequality threaten the social fabric of our democratic systems, but also because conventional forms of redistribution through taxes have become largely toothless,” she writes in her book. “Indeed, shielding assets from taxes is one of the most sought-after coding strategies that asset holders covet. And lawyers, the code’s master, are paid extraordinary fees to place them beyond the reach of creditors, including tax authorities.”

Breaking From a ‘Feudal Function’

The Code of Capital has been described as “brilliant and disquieting” by the historian Samuel Moyn, a professor of jurisprudence at Yale Law School, in a review for the Law and Political Economy blog. Pistor “unmasks how law has never moved far from its central ‘feudal’ function of locking in the ascendancy of some to the detriment of others—a depressing finding especially now, when formal democracy tolerates real oligarchic rules so openly,” he writes. “Even so, the descriptions of the details in The Code of Capital of how this process unfolds are indispensable for anyone who, dreaming of the substantive equality whose promise still draws some to law school as students or teachers or writers, would challenge the result.”

Although she does not expect radical change, Pistor says she hopes her book will encourage lawyers to “examine the effects of choices they make on others, on the system as such, on the stability of the financial system, or on the production of wealth or inequality. . . . I think it would be useful if, even just at the margin, we shift our decision-making.”