JUSTICE ROBERTS WILL PRESIDE OVER FINALS OF CLS MOOT COURT
Harlan Fiske Stone Competitors Prepare for Moot Court Contest
Whittled down from an original 55 competitiors, four top scorers will present arguments before a simulated bench including U.S.Chief Justice Roberts at finals on April 17
BY MIRIAM FURMAN 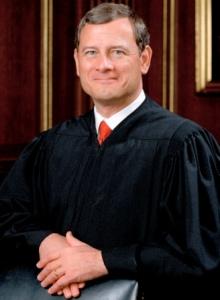 Chief Justice of the United States John G. Roberts, Jr. (at left) will preside at the Harlan Fiske Stone Honors Moot Court Competition, the Law School’s most prestigious moot court contest, on April 17 at 4 p.m. in Jerome Greene Hall.
Jordan W. Conors '08, Christopher M. Hogan '08, Mollie M. Kornreich '09 and David Scherr '09 have won the opportunity to compete.
The contest, open to the entire Law School community, is such a big draw that classes are cancelled as the contenders vie for the title of best orator. (The caliber of a student’s brief also counts towards this award.)
Started in 1925 and named for the former dean and Supreme Court justice, the Stone Competition gives participants an opportunity to sharpen their legal advocacy skills by arguing a simulated appellate legal problem. Alison Wright '08 wrote this year’s problem, in which three low-income Illinois women who claim they’ve been denied quality medical care resulting in damages to themselves and their offspring, file a class- action suit against the director of the Illinois Department of Healthcare and Family Services.
The issues at stake in Nafziger v. Kaergard include whether the women have the right to sue under a subsection of the Medicaid title of the Social Security Act, and whether the case may be certified as a class action suit on behalf of all low-income women in the state who met certain criteria. The case is set in the Seventh Circuit Court of Appeals.

“This year’s case is particularly interesting,” said Professor Philip Genty, director of the Law School’s moot court program, because it involves a split decision that both sides are appealing—whether the women have the right to sue and whether they have a right to sue as a class.”
The competition started last autumn with 55 second- and third-year students, divided up into two-person teams: one team for the plaintiff, the other for the defendant. Each student on a team briefed one issue of a two-issue case and argued that issue in two oral arguments before benches composed of judges and lawyers (acting as judges). In each session, the students argued their case opposite a different team and before different judges.
Only the four top scorers proceeded to the finals. On April 17 they will present their arguments and answer questions from the four judges on the bench - Chief Justice Roberts and three U.S. Court of Appeals judges: Hon. Diana G. Motz, 4th Circuit; Hon. Diane P. Wood, 7th Circuit; and Hon. Michael W. McConnell, 10th Circuit.
“The judges of the finals don’t usually rule on the merits of the case,” said Genty. “But they do give an award for the best orator. It’s a challenging competition because appellate work is more rigid than trial work.”
Oral advocacy skills alone aren’t enough to advance in the competition. In the first two rounds, judges evaluate the students’ briefs as well as their oral arguments.
All CLS students participate in moot courts as part of their first-year program after learning oral advocacy skills in required legal practice workshops. There are numerous moot-court competitions for the students to enter: Frederick Douglass, Native American Law Students Association, Jessup International Law and European Law Moot Court. The Jerome Michael Jury Trial is available to them in subsequent years.
The Stone competition tends to attract students who want to be litigators, Genty said. Contestants don’t receive academic credit for participating in this honors competition because, other than the feedback from the judges, there’s no instructional component; students are on their own.
This autonomy has prompted some participants to become extremely resourceful in preparing to compete: Geoffrey Reed '09, who participated last year, said he and partner Eric Chesin '09 (who won the award for best oral advocacy) prepared for the finals by doing a “run through” before associates at a law firm that specialized in appellate work. “Participating in Stone was one of the highlights of my law school career,” said Reed, a JD/MBA student. “I’d love to go into appellate work as it requires a high level of argument and advocacy.”
Wright’s affinity for legal research and writing prompted her to apply for the job of writing this year’s case. “I took bits of facts from real cases and tied them together into a fictitious case,” she said, adding that the case is based on a set of problems that come up frequently, but ones that neither the 7th Circuit nor the Supreme Court have addressed.
Professor Katherine Franke assisted Wright on constitutional rights issues, Professor Henry Monaghan helped with the class action aspect of the suit and Genty reviewed the entire brief and bench memoranda.
Wright will be applying her research and writing experience to the job she’s landed after graduation as a lawyer for the U.S. Senate’s Office of Legislative Counsel. There, she expects to review and draft legislation.