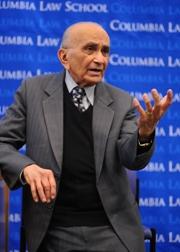 New York, April 8, 2009 -- Justice P.N. Bhagwati served on the Supreme Court of India during an extraordinary period that saw a series of landmark rulings supporting human rights and expanding access to justice for all Indians. Justice Bhagwati described the evolution of India’s human rights law in a talk at Columbia Law School on March 31.

“The Supreme Court developed human rights jurisprudence much beyond the expectation or even the dreams of the makers of the constitution,” said Bhagwati, who served on the Supreme Court of India from 1973 to 1986, including one year as Chief Justice of India. He is currently vice chairman of the UN Human Rights Committee and a member of the International Advisory Council of the World Bank.

David M. Schizer, Dean and the Lucy G. Moses Professor of Law, introduced Bhagwati to the audience as one of India’s “most distinguished jurists.”

Bhagwati began his talk with a statement of the principle that guided the Supreme Court: India’s constitution, enacted in 1950, made the Fundamental Rights enforceable and made the Supreme Court their custodian. With this in mind, the Court used the constitution as a springboard to guarantee rights – to equal protection from arbitrary action, procedural due process, and environmental protection, among others – and to establish public interest litigation.
Bhagwati described two cases that expanded the rights guaranteed by Article 21 of the constitution. In the first, Maneka Gandhi, the daughter-in-law of Indira Gandhi, had challenged the Indian government when it would not issue her a passport. The state claimed compliance with the Passport Act, which allowed the government to forfeit a passport when it sees fit, but the Court decided otherwise.
“We struck down that provision of the Passport Act which vested complete unguided, unfettered power in the government,” Bhagwati said. The Court held that Gandhi had a right to a passport under Article 21, which stated that no one shall be deprived of his liberty except by procedure established by law. In a decision Bhagwati delivered, the Court stated that such procedure must be “reasonable, fair and just,” establishing procedural due process.
Bhagwati also told his Columbia audience how the Supreme Court expanded the right to life granted by Article 21 to include environmental protection. One case concerned the environmental impact of limestone quarries created under government contracts in the north of India. Bhagwati appointed three geologists and three environmentalists to investigate the area and issue a report to the Court. Based on the environmental damage the experts found – destruction of large numbers of forests, which dried up the water springs – the Court ordered 48 of the 52 quarries shut down.

“Life means not only physical existence,” Bhagwati said. “It means the use of every limb or faculty through which life is enjoyed. … The right to life includes the right to a healthy environment.”

In the final part of this talk, Bhagwati described how the court gave every person the opportunity to seek enforcement of their basic human rights. India’s constitution allows parties to go directly to the country’s highest court in cases of human rights violations. Bhagwati, recognizing that the impoverished lacked the resources to litigate, expanded the doctrine of standing to make justice more accessible.

Bhagwati decided that where a person or class of persons whose rights are infringed upon cannot go to court, any individual, social action group or NGO could espouse the cause of these people. Moreover, the Court would accept petitions in the form of letters of grievance, a system known as epistolary jurisdiction. When the petitioners could not afford counsel, the Court would appoint amici curiae to represent them.
Public interest litigation cases began rolling in. One case Bhagwati described concerned bonded laborers, who were “working like slaves,” he said. An NGO had written a letter to the Supreme Court after reading in a travelogue an account of bonded laborers in southern India. Bhagwati ordered an investigation by the district’s collector, who found that the workers lived in terrible conditions without access to education for their children or freedom to leave the area.
Bhagwati ordered the 10,000 workers released from bondage, and over time they found employment through NGOs. On the day of Bhagwati’s retirement, he received a garland of cardamom hand-woven by these people. In a farewell address, Bhagwati expressed his appreciation for the garland, which “represents the sweat and toil of thousands of workers,” he said.
“If we want human rights to become meaningful for the large masses of people in the country, this is the only way in which it can be done,” Bhagwati said of public interest litigation. “Government alone will never be able to do it. … It is only the people themselves who must utilize law for the purpose of bringing justice to the doorsteps of the large masses of people of the country.”
Among the Columbia Law School students who attended the talk was Mary Irozuru ’11, who is considering studying abroad in Delhi or Bangalore and wanted to learn more about India’s constitution. “India has a legal structure similar to ours,” she said. “It’s really interesting how they have massaged it to expand it to address the unique issues they face as a developing country.”

So inspiring was Bhagwati’s talk that Tanya Sehgal ’11, who came to hear about comparisons between American’s constitution and India’s, left with newfound enthusiasm for human rights law.
Sehgal said, “[Bhagwati] made it seem like you really can do something to make a difference in people’s lives.”
###
Columbia Law School, founded in 1858, stands at the forefront of legal education and of the law in a global society. Columbia Law School joins traditional strengths in international and comparative law, constitutional law, administrative law, business law and human rights law with pioneering work in the areas of intellectual property, digital technology, sexuality and gender, criminal, and environmental law.
Visit us at www.law.columbia.edu.