Three U.S. Supreme Court justices helped Columbia Law School and the U.S. Court of Appeals for the 2nd Circuit celebrate the court’s 125th anniversary and two of its legendary judges. 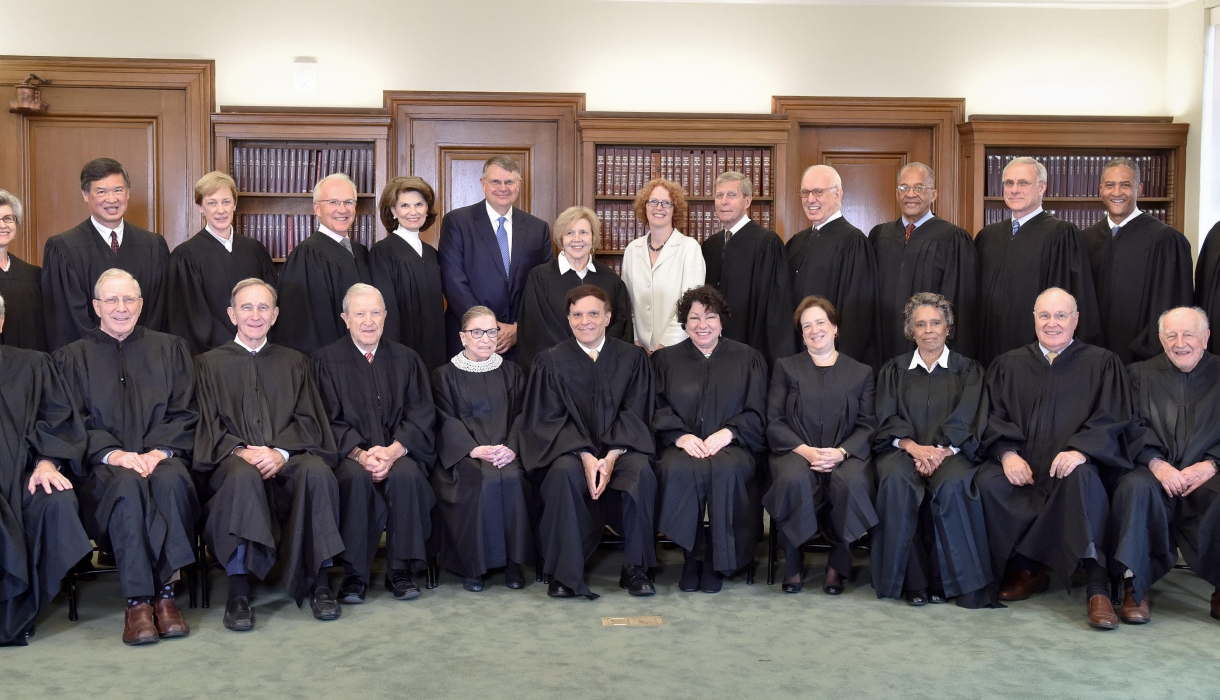 From 1959 through 1961, when U.S. Supreme Court Associate Justice Ruth Bader Ginsburg ’59 clerked for Southern District of New York Judge Edmund L. Palmieri ’29, she often caught a ride home in the backseat of her then-boss’ Mercedes. The front seat was already occupied. Palmieri also drove the revered Learned Hand, then a senior judge on the U.S. Court of Appeals for the 2nd Circuit.

“Fortune favored me,” Ginsburg said, recalling how Hand recited poetry and bellowed ballads during the drive uptown. Her remarks were part of an extraordinary special session of the 2nd Circuit, held to recognize the closing of the court’s 125th anniversary. Co-sponsored by Columbia Law, the event, the last in a year-long celebration, also included the 2nd Circuit’s judges, as well as three special guests: Ginsburg and U.S. Supreme Court Associate Justices Sonia Sotomayor (a former 2nd Circuit judge) and Elena Kagan. The session also recognized the influence of Hand and his cousin Augustus Hand, who served on the court until his death in 1954.

Professor Thomas Merrill delivered the Hands Lecture—delivered each year on a topic of interest to the judiciary and the bar—during the afternoon session (see more on Merrill’s lecture below). Ginsburg, Sotomayor, 2nd Circuit Chief Judge Robert A. Katzmann, Columbia Law School Dean Gillian Lester, and 2nd Circuit Judge Richard C. Wesley, who chaired the anniversary committee, also paid tribute to the Law School’s many connections to the court.

For the Columbia Law School professors who attended—including Olatunde Johnson, Daniel C. Richman, and Lance Liebman—the event at the Thurgood Marshall U.S. Courthouse near the Brooklyn Bridge in downtown Manhattan represented a bit of reciprocity. For years, 2nd Circuit judges have made the trek up to Morningside Heights to teach or sit as moot court judges.

Ginsburg on Hand’s presence on the court

Among the guests, Ginsburg’s remarks were the most personal. At times referencing a biography of Hand by Gerald Gunther, a former Columbia Law School faculty member who had been one of Ginsburg’s professors and mentors, Ginsburg cited some of Hand’s most famous remarks, including a well-known speech he delivered in May 1944 as part of a patriotic event in New York City’s Central Park. About 1.5 million people attended, including 150,000 newly naturalized citizens.

Ginsburg said Hand “contributed enormously” to the court’s jurisprudence and knew “his authority as a judge ultimately rested with his power to persuade.”

Merrill provided a deeper dive into Hand’s impact on the court. His lecture, “Learned Hand on Statutory Interpretation: Theory and Practice,” explored Hand’s belief that judges should interpret statutes by asking “what the legislature would have decided if the issue had occurred to the legislators at the time of enactment,” a philosophy former 7th Circuit Judge Richard Posner later dubbed “imaginative reconstruction.”

Although Merrill found Hand did not explicitly use imaginative reconstruction to the extent he theorized about it, he said he did not view the theoretical exercise as a waste of time, saying it most likely “shaped [Hand’s] general attitude about how to resolve the issues presented to him for resolution as a judge…”

Columbia Law School Adjunct Professor Richard J. Sullivan, a U.S. District Judge for the Southern District of New York, brought students from his seminar, American Jurisprudence: Judicial Interpretation and the Role of the Courts, to observe the event and hear Merrill’s lecture.

“What an honor it is to be a part of this concluding event,” Dean Lester said, adding that the 2nd Circuit has been a “standard bearer of balanced insight and rigor.”

Lester noted that 10 of the court’s judges have been graduates of Columbia Law School, starting with Emile Henry Lacombe, an 1865 alumnus first appointed to the bench by Grover Cleveland in 1887. Today, the court includes two alumni who also serve on the Law School’s faculty: Professor Gerard E. Lynch ’75 and Adjunct Professor Robert D. Sack ’63. Judge Debra A. Livingston also serves as a professor.

“The legacies and import of these two institutions will always be entwined,” Dean Lester said.

At the dinner, Ginsburg spoke of her connection to the Law School. She said “how happy” she was that Columbia “welcomed” her after she left Harvard Law School, even transferring her onto the Columbia Law Review from the Harvard Law Review.

She noted that she had been hired as the first female tenured professor at Columbia Law School in 1972, by then Dean Michael I. Sovern ’55 (later Columbia University’s president), who was also in attendance at the dinner.

Sotomayor also described her ties to the Law School.

“Although I am not an alumna, I have enjoyed a warm relationship with the school,” she said.

Before she was appointed to the Supreme Court, Sotomayor served as a lecturer at Columbia Law School, where she has also spoken frequently and served as a judge for the Harlan Fiske Stone Moot Court finals in 2011. In 2015, Sotomayor introduced former Southern District of New York Judge Miriam Goldman Cedarbaum ’53 via video address when Cedarbaum was awarded the Law School’s Medal For Excellence.

“We hoped to help lead the next generation of thoughtful and competent lawyers” into public service, Sotomayor said. “I think we did our job.”