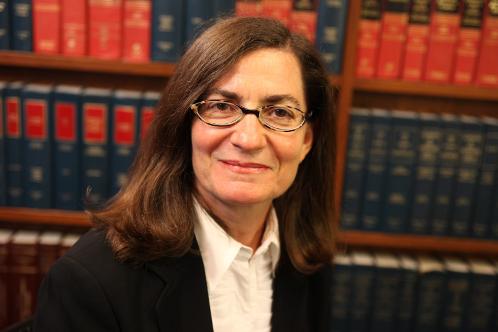 Julie Brill, whom President Obama selected for the Federal Trade Commission, co-teaches a weekly seminar at Columbia Law School on "The Role of the State Attorney General." (Photo by Michael Dames).
New York, Nov. 17, 2009 – Julie Brill, a member of the faculty at Columbia Law School, has been nominated as Commissioner, Federal Trade Commission, by President Obama.
Brill is currently the Senior Deputy Attorney General and Chief of Consumer Protection and Antitrust for the North Carolina Department of Justice, a position she assumed in February. She was previously Assistant Attorney General for Consumer Protection and Antitrust in Vermont, from 1988-2009.
Obama said of Brill and other individuals whom he intends to nominate to key administration posts, "These individuals bring a depth of experience to their respective roles, and I am confident they will serve my administration and the American people well. I look forward to working with them in the months and years ahead."
Brill co-teaches a weekly seminar at Columbia Law School on “The Role of the State Attorney General” with James Tierney, Director of the National State Attorneys General Program and former Attorney General of Maine.  "In addition to her legal skills, Julie has proven to be a gifted teacher who is dedicated to our students,” Tierney said. “The President has made a wise choice by naming her to the Federal Trade Commission."
Brill has received several national awards for her work protecting consumers nationwide. She has testified before Congress, published numerous articles, and served on many national expert panels focused on consumer protection issues such as pharmaceuticals, privacy, credit reporting, security breaches, and tobacco. She has also served as a Vice-Chair of the Consumer Protection Committee of the Antitrust Section of the American Bar Association since 2004. Before entering the field of law enforcement, Brill was an associate at Paul, Weiss, Rifkind, Wharton & Garrison in New York, and clerked for Vermont Federal District Court Judge Franklin S. Billings Jr.
A magna cum laude graduate of Princeton University, Brill earned her J.D. from New York University School of Law, where she was awarded a Root-Tilden Scholarship for her commitment to public service.
Columbia Law School, founded in 1858, stands at the forefront of legal education and of the law in a global society. Columbia Law School joins its traditional strengths in international and comparative law, constitutional law, administrative law, business law and human rights law with pioneering work in the areas of intellectual property, digital technology, sexuality and gender, criminal, national security, and environmental law.