New York, April 20, 2012—Judge Miriam Goldman Cedarbaum ’53, senior judge of the U.S. District Court for the Southern District of New York, was this year’s recipient of the Distinguished Alumna Award at the Columbia Law Women’s Association annual Myra Bradwell Award Dinner. The award honors the influential women who have graduated from Columbia Law School, and have helped pave the way for future generations of women lawyers. 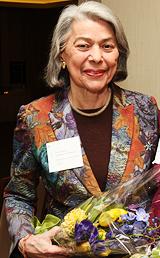 Cedarbaum has been on the federal bench since 1986, and has presided over dozens of high-profile cases, including, most recently, the trial of Faisal Shahzad, who was convicted of an attempted car bomb attack in New York's Times Square. She was also the judge on the Martha Stewart trial.

A graduate of the class of 1953, Cedarbaum was one of only eight women in a class of 280. That “didn’t stop her from achieving an outstanding law school record,” her friend and colleague, Judge Shira A. Scheindlin, also a U.S. District Judge for the Southern District of New York, said in her introduction. While at the Law School, Cedarbaum served on the Board of Editors of the Columbia Law Review and was both a James Kent and a Harlan Fiske Stone scholar.

In her keynote speech at Columbia University's Faculty House on March 26, Cedarbaum discussed Bradwell’s successes and limitations. She said Bradwell is remembered “mostly as a symbol of restrictions on women and perhaps even, of failure.” Bradwell, a lawyer and political activist, was denied admission to the Illinois Bar in 1869; as a married woman, she was prohibited from entering into legally binding contracts. When she appealed her case to the Supreme Court in 1873, the court upheld the state’s decision, and Bradwell did not receive her license until 1890.

Bradwell's marriage to James Bradwell, a penniless English immigrant, was ultimately a boon to her legal career. He was “brilliant lawyer,” said Cedarbaum, and “the true life partner who would support and collaborate with her.”

After reading law in James’ office, Bradwell founded The Chicago Legal News, through which “she would have more influence on the law than any single practitioner would,” Cedarbaum said. Not only did Bradwell make a fortune, but through her cogent, often witty editorials, she shaped legal opinion in the Midwest on a wide range of issues, urging the passage of laws regulating railroads and large corporations and advocating for improved court procedures and the formation of bar associations.

Cedarbaum remarked that Bradwell achieved this while raising four children, one of whom graduated first in her class at what is now Northwestern Law School. “For those of us who value women’s achievements, Myra Bradwell should be a powerful symbol—not of constraint, but of boundless energy and accomplishment,” she told attendees.

While Cedarbaum is well known for trying the Martha Stewart insider trading case in 2004, Scheindlin noted that her friend also “made her mark with respect to another well-known Martha,” citing Cedarbaum’s use of the “vehicle of the trial to recapture the history of the Martha Graham Dance Company.” Cedarbaum ruled that the company’s parent organization, the Martha Graham Dance Center, owns the rights to 54 of Graham's dances, with an additional 10 in the public domain because of public access to them through films and videos.

Sheindlin highlighted Cedarbaum’s devotion to public service as a trustee emerita of Barnard College, as a member emeritus of the Board of Visitors of the Columbia Law School, and—in her hometown—as counsel to the Scarsdale Open Society Association, among other local positions. 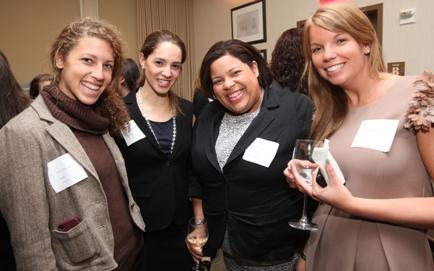 “My mother was an inspiration to her two lawyer sons,” said Cedarbaum’s younger son, Jonathan, a lawyer in Washington, D.C., who attended the dinner. He added, “like Myra Bradwell, she was lucky to find a life’s companion, a fellow lawyer who supported her pioneering work in the law,” Cedarbaum’s late husband Bernie.

Cedarbaum acknowledged experiencing sexism when she was a student, but said, “My predominant experience was one of equal treatment and warm camaraderie with my peers.” She said entering the male-dominated law school was less daunting because she was preceded by her late sister, Ruth Goldman Shapiro ’50, who was the Notes editor of the Law Review and went on to become “a brilliant tax lawyer.”

This award dinner, chaired by Michelle Chan ’13, concluded with the announcement that Kate Gillespie Wellman ’13 was the winner of the Journal of Gender and Law’s Myra Bradwell Note competition, for “Taking the Next Step in the Legal Response to Domestic Violence: The Need to Reexamine Specialized Domestic Violence Courts from a Victim Perspective.”