Judge Sorokin asks those convicted to acknowledge, if not ameliorate, the harm they caused. 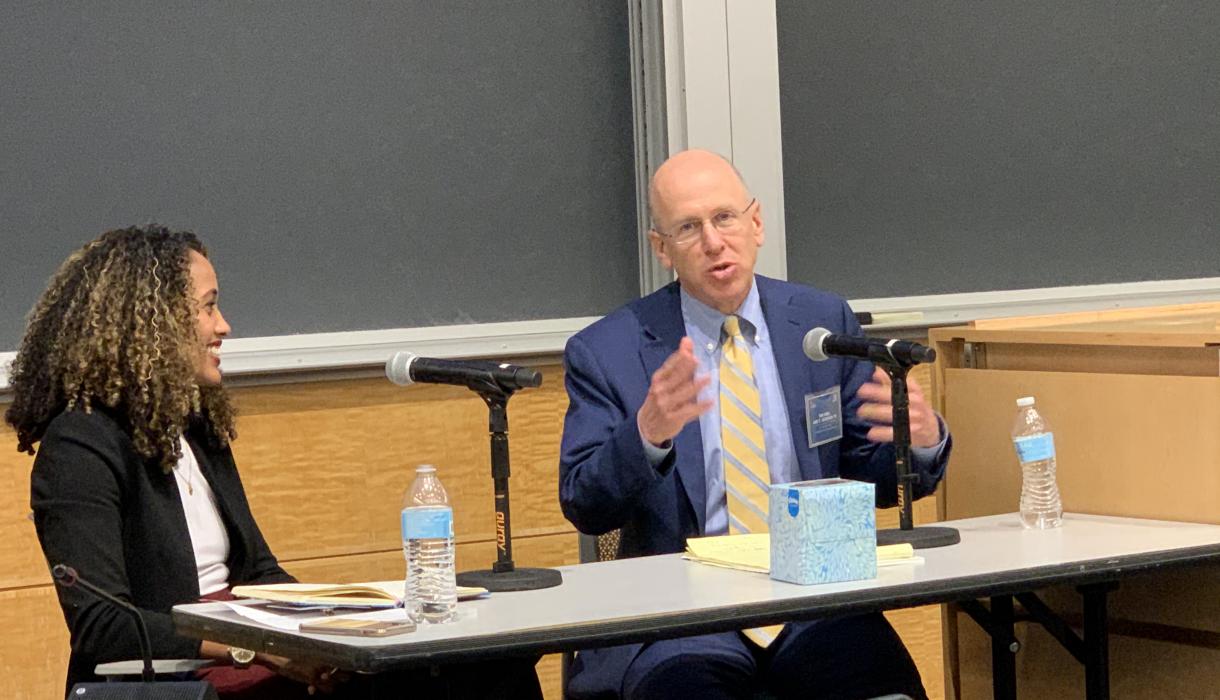 Federal District Judge Leo T. Sorokin ’91 (above right), who started an innovative delayed-sentencing program in Massachusetts, says the idea of restorative justice should be integral to the criminal justice process.

In 2013, Sorokin launched the RISE program, which offers a year-long delay in sentencing for some criminal offenders who have qualified for pre-trial release while they complete an intensive supervision program aimed at helping them get their lives on track. Like similar programs in California and New York, RISE —the name is an acronym for Repair, Invest, Succeed, Emerge—has a restorative justice focus: Its participants must meet with crime victims to recognize and attempt to repair the harm they have caused.

The judge discussed his approach with Alexis Hoag, a Columbia Law School lecturer and practitioner-in-residence at the Eric H. Holder Jr. Initiative for Civil and Political Rights, during a noontime event on February 27 at the Law School.

Sorokin said his interest in restorative justice stems from a conversation he had with a man convicted of bank robbery, who told him: “I want to apologize to the teller and I want to apologize to my sisters . . . because of what a lousy brother I’ve been and all the things I’ve put them through.” Those comments resonated with Sorokin. While presiding in Massachusetts’ drug court, he had also heard from substance abusers who had gotten sober and fulfilled sentences, but had yet to deal with the damage to their families caused by their addictions and crimes. “Until they dealt with those issues, they were going to be simmering,” Sorokin said.

In all his cases, Sorokin gives convicted defendants a pre-sentencing questionnaire that asks them to identify the people they’ve harmed and in what ways, and how they might make amends. He also makes an effort to meet with crime victims to explain the sentencing process and ask what they might find meaningful.

“A lot of people who are victims of crimes don’t understand the range of things I could do for them in sentencing,” he said, such as a “stay away” order. A bank teller victimized in a robbery by an opioid addict, for instance, may want to be informed by the probation office that the perpetrator remains in drug treatment even after their incarceration ends. “I can understand why somebody would want [to know] that, and there’s no reason why I wouldn’t do that,” Sorokin said.

The judge says his work to expand restorative justice isn’t a criticism of current practices. “The question is, can we do better now?” he said. “I’m a public servant, and it would be irresponsible for me not to try to do better.”

This event was sponsored by the Office of Judicial Clerkships.