Jessica Lenahan?s Quest for Justice Continues 10 Years after Her Daughters? Were Killed 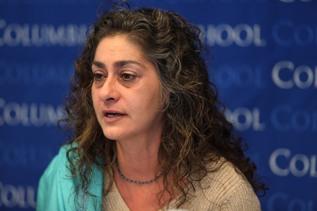 Media Contact:
Public Affairs Office 212-854-2650 [email protected]
New York, October 29, 2009 – It’s been more than 10 years since Jessica Lenahan Gonzales’ three daughters were killed after police failed to enforce a restraining order against her estranged husband, who had kidnapped the children.
It’s also been more than 10 years that she has waited to achieve some measure of justice for Rebecca, Katheryn, and Leslie. The wait has left Lenahan, who long ago dropped her married name Gonzales, nothing if not bitter.
“I absolutely don’t believe in our government at this point, and obviously for good reason,” said Lenahan during an appearance Tuesday at Columbia Law School, where Caroline Bettinger-Lopez, deputy director of the Law School’s Human Rights Institute, has been Lenahan’s primary legal counsel.
Students in the Law School’s Human Rights Clinic also helped prepare Lenahan’s latest case, which is before the Inter-American Commission on Human Rights. It will decide whether the failure of police to protect Lenahan and her daughters violated several basic human rights. Lenahan said a decision may be handed down by the end of the year.
“We might actually think about incorporating some of these human rights into domestic legislation,” Bettinger-Lopez said.
Lenahan had contacted the police in her hometown of Castle Rock, Colo., in June 1999, when she discovered her daughters missing. She suspected they were taken by her estranged husband Simon Gonzales, against whom she had a permanent restraining order.
Despite repeated pleas by Lenahan, police did nothing to help locate Gonzales or the girls. Ten hours after her first call, Gonzales, who had a history of erratic behavior and run-ins with law enforcement, showed up outside the Castle Rock police department and stood in front of his truck and started shooting. Officers returned fire and killed Gonzales, then discovered the girls behind him inside the truck. The time, place, and circumstances surrounding their death have never been determined.
Lenahan sued the Castle Rock police department, alleging her civil rights had been violated. But in 2005, the U.S. Supreme Court rejected her claim and said she had no constitutional due process right to have the restraining order enforced.
“It’s been really hard. I’m just so angry,” Lenahan said as she started to cry. “I’m just really, really angry with our government. The idea that they can impose such abuse and violations – it’s like they took over where Simon left off.”
Lenahan was joined Tuesday by Bettinger-Lopez and four other Law School professors who use her Supreme Court case in various classes. Professor Gillian E. Metzger, who teaches constitutional and administrative law, said the case is hard to read.
“The decision is very hard to swallow in the context of the case,” Metzger said.
“Restraining orders typically were developed as mechanisms to protect primarily women from domestic violence, and courts, which have been primarily concerned about protecting parental rights, have had a hard time understanding that often the perpetrator of domestic violence is also a child abuser,” said Elizabeth Scott, Harold R. Medina Professor in Procedural Jurisprudence and Vice Dean.
The Inter-American Commission has no enforcement powers, but Lenahan is hopeful the moral and political weight of a favorable decision can influence reforms and spur greater awareness and sensitivity in the legal system about domestic violence.
“The United States needs to figure out what remedies we can take from the commission’s decision and apply them,” Lenahan said, “but they’re not going to do it without us pushing them and really shaming them into doing the right thing, which is very sad.”
Watch a Telemundo news segment (in Spanish) about Jessica and her case: http://www.telemundo47.com/video/21443780/index.html
Columbia Law School, founded in 1858, stands at the forefront of legal education and of the law in a global society. Columbia Law School joins its traditional strengths in international and comparative law, constitutional law, administrative law, business law and human rights law with pioneering work in the areas of intellectual property, digital technology, sexuality and gender, criminal, national security, and environmental law.
Visit us at www.law.columbia.edu.