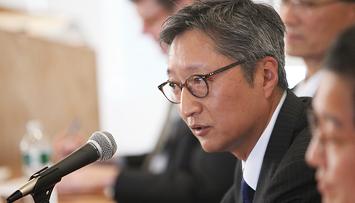 Professor Roh (above) focused his discussion of power shifts on the legal aspects of the division of North and South Korea. He argued that before any changes in the relationship or reunification between the two separated states can be considered, the ongoing war between North and South Korea must be legally ended. Only then can the two states, as well as other regional and international powers, reach a productive dialogue.

Roh is a recognized expert on North and South Korean legal relations, specializing in the development of constitutionalism and, as well as U.S. and East Asian international transactions. He served as legal advisor to the Korean Ministry of National Unification on the KEDO North Korean Light-water Reactor Project, and is a member of the Korean Ministry of Justice's New Round Legal Assistance Council.