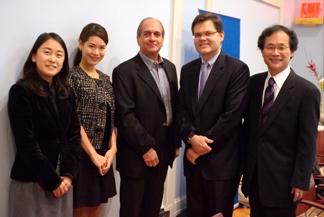 November 14, 2008 (NEW YORK) –The American jury system dates back to the Assize of Clarendon, a law handed down by Henry II in 1166 that established juries in every English borough. The new “presentment juries” were charged with initiating cases, a duty previously reserved for private citizens.

Nearly 1,000 years of legal evolution later, most every American can recite the key responsibilities of the modern criminal jury – deliberating secretly, determining guilt, convicting by unanimous vote.
Japan, on the other hand, is presently building its own new jury system from the ground up. After nearly five years of debating, testing and refining, Japan’s new Saiban-in (or “lay judge”) system bears only a passing resemblance to its American cousin. Beginning next May, defendants charged with serious crimes will be tried by a panel of six jurors and three judges, sitting together in a single line. Together and by a simple majority, the panel will rule on both guilt and sentencing.

On November 5, Columbia Law School’s Center for Japanese Studies hosted a panel featuring a judge, a prosecutor and a professor from Japan, as well as two Columbia Law professors, that discussed the history, strengths and potential pitfalls of the Saiban-in system. The panel was the brainchild of Fuyo Professor of Japanese Law Curtis Milhaupt (below), who moderated the discussion. More than 30 people attended, including at least one federal judge and a high percentage of the law school’s Japanese students. 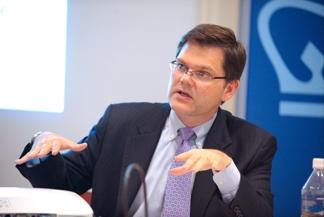 Panel member Takashi Maruta, a Professor of Law at Kwansei Gakuin University Law School, called the Saiban-in a key component of the decade-long effort to democratize and add transparency to the criminal justice system of Japan, which suspended its nascent experiment with juries in 1943 (as only men could serve as jurors and the war made filling a panel nearly impossible). In 2004, the Diet enacted the Law of Saiban-in, ending the six-decade suspension.
While the Saiban-in system may resemble some of its European counterparts, the Japanese use of “lay judges” will be a study in contrasts for Americans. As described by panel member Nanae McIlroy ’08 LL.M., a Japanese Public Prosecutor, the panels will try all defendants facing either a potential sentence of death or a sentence of indeterminate length, as well as most crimes involving an intentional act that caused a death. The Saiban-in will rule by a simple majority, though the majority must include at least one of the three judges. Jurors cannot waive their right to a Saiban-in trial, and all judges, lawyers and persons over 70 are automatically excused from the juror pool.
Perhaps the starkest departure from the U.S. method is that the panels will be encouraged to participate in “intermediate” deliberations. Panel member Reiko Kaihatsu ’08 LL.M., a judge in the Saitama District Court, said that the nine jurors should “discuss and evaluate the evidence” throughout the trial – while, say, on recess or at lunch. She explained that legislative planners learned in a series of mock trials that such discussions facilitate two of the court system’s chief goals, speed and transparency. In other words, the single most infamous cause for mistrials in the United States – jurors discussing a case and forming an opinion prior to deliberations – will be a central component of the Saiban-in way.
The panelists emphasized that the unique system reflects a very different set of criminal justice issues. In Japan, where drug and gun violence are all but unknown, the standard for simply bringing charges is “beyond a reasonable doubt.” The prosecution rate is 99.9 percent, the confession rate is 93 percent and plea bargaining is strictly forbidden, according to Professor Maruta. During the post-round-table reception, McIllroy said that in her three years with the Ministry of Justice she handled only one gun case.
The high standards for prosecution and low frequency of violence notwithstanding, the extraordinary conviction rate is cause for concern, Maruta suggested. As he put it, “We need some fresh air.”
Panelist Jeffrey A. Fagan, Professor of Law and Public Health and Co-director of the Center for Crime, Community and Law, set forth a number of concerns about Japan’s experiment in democratizing justice.
Fagan questioned whether, for example, the Japanese equivalent of Joe the Plumber would be able to debate or challenge an experienced judge who did not share his views.

“I think it’s a difficulty of human nature,” Fagan said, “to argue with someone of a higher status.”

The professor also warned his Japanese colleagues about that most notorious of archetypes, the “crazy juror.” He cited the recent trial of Alaska Senator Ted Stevens, in which one juror was excused because of her violent outbursts and another faked a death in her family in order to attend a horse race.

Professor Milhaupt said he believes that “pessimists overstate the degree to which culture will inhibit lay jurors from speaking their minds in deliberation with professional judges. What I think is that it’s a really bold experiment.” He continued, “The Japanese are often criticized for being ultra-conservative and slow to change. But this is a pretty radical system. My initial reaction is surprise.”

One audience member called Japan’s implementation of a brand new jury system a unique opportunity to gather empirical evidence. “I think it’s a very important opportunity for students of U.S. law to study the role of our own jury system,” said Jesse Gillespie ’09. “It’s not every day you see a country experiment with changes in criminal justice.” 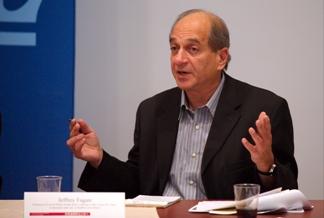 Fagan (above) agreed. “This is a great opportunity for public research,” he told the audience. “I’d love to get a grant and go to Japan and interview jurors.”

Columbia was the first law school in the United States to offer courses in Japanese law. Founded in 1980, the Center for Japanese Legal Studies actively promotes research on Japanese law, aided by the country's premier collection of Japanese legal materials.