Vilified by many Democrats and fired by President Trump, the former FBI director talks about meeting with the president, why he leaked his memo, and how he will work to deny Trump a second term. 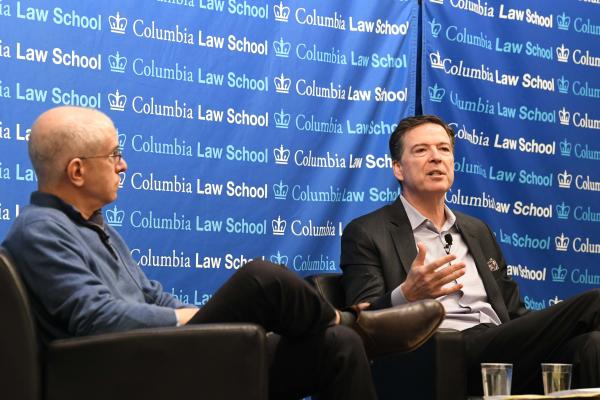 Former FBI director James B. Comey, fired by a president some Democrats believe he helped elect, urged Columbia Law School students to enter public service despite his own rough ride at the top of U.S. law enforcement.

“Do it,” he said. “Pick the place to work at the level that’s most consistent with your values. Try to find work with moral content. Try to find it in a place where you’re not near that [political] turbulence, and you’ll never be sorry.”

Comey knows the turbulence only too well. He infuriated Democrats when he revealed in October 2016 that the FBI had reopened its investigation into Hillary Clinton’s emails, less than two weeks before the presidential election. He fared no better with Republicans. In May 2017, less than halfway through his 10-year term as director, President Donald Trump fired him amid a criminal investigation into Russian interference in the election.

Making a “Terrible” Choice
During a two-day visit to the Law School, Comey answered questions at a faculty workshop, visited with Public Interest/Public Service Fellows, and sat in on Richman’s criminal law class. A lunch meeting with students interested in working for the Justice Department was so oversubscribed that Comey held two sessions.

The 2016 decision to announce reopening the Clinton investigation is one Comey said he is asked about regularly. But he also stands by it. “I hope to God it had no impact on the election,” he said. “It was a terrible decision. It was just better than the alternative, which was simply awful.” He was determined not to consider whether the revelation would affect the election, he said, because “down that path lies the death of the FBI as an independent institution.” An inspector general’s report in 2018 supported the FBI’s decision to close the email investigation but criticized Comey for his public statements.

Comey was also castigated by the inspector general for making public, after he was fired, a memo he had written summarizing his meetings with Trump. Comey said he leaked the memo—which described the president’s efforts to get him to pledge loyalty and to back off investigating former national security adviser Michael Flynn—to prompt an investigation into Trump’s request about Flynn. He said he had Richman leak it to news organizations on his behalf “for practical purposes,” so he wouldn’t have to engage directly with a “horde” of reporters. He says now he should have done the job himself.

“I regret that because I think it looked a little sneaky,” he said.

Promoting Public Service
Comey’s visit to Columbia Law was not his first. When President Barack Obama tapped him to be FBI director in June 2013, he was in residence at the Law School as a senior research scholar and a Hertog Fellow. A former federal prosecutor, Comey served as deputy attorney general under President George W. Bush and worked in the private sector as general counsel at Lockheed Martin and hedge fund Bridgewater Associates.

Now Comey jokes that he is a “B-list unemployed celebrity,” spending his time meeting with students at top-tier law schools. He preaches the virtues of public service to law students who ask whether they should consider government careers in an era of intense partisanship, and he also is determined to defend the FBI, which has received criticism in reports from the Office of the Inspector General and in tweets by Trump.

“My great worry about the Trump era is that talented people will find it so awful that they will withdraw from the public square,” he said.

Comey also plans to volunteer for the 2020 Democratic presidential nominee. “I am going to offer to be helpful to whoever is running against Donald Trump because we need a different president,” he said, though he realizes they might decline his help. He’s not angling for a job in a Democratic administration, he said. “I don’t think I’ll ever go back to government. Who would have me? I can’t imagine. And that’s OK.”

Nearly three years after his firing, Comey remains a Trump target. His visit to the Law School on February 5 and 6 coincided with the Senate vote to acquit President Trump on impeachment charges. In a White House appearance after the vote, Trump referred to Comey as “that sleazebag.”

For his part, Comey likens Trump to an organized crime boss, seeking to bring everyone into his circle of loyalty and dividing the world into friends and enemies. “His leadership style is entirely focused on himself, and he measures everything by how it affects him,” Comey said. “He has only one external reference point: How will whatever this is get me the affirmation that I crave?”

Comey’s goal as FBI director, he said, was to maintain the separation of the agency from the executive branch, all the way to small gestures like staying away from the basketball court at FBI headquarters when Obama was playing pickup games there.

Trump “saw my separation as a threat,” he told students. “And that’s how I got fired.” 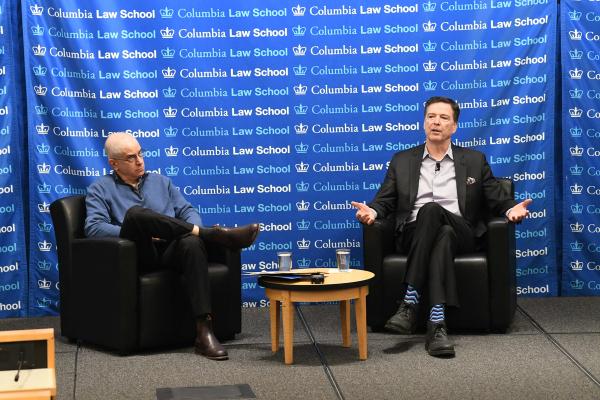 James Comey's talk was made possible by the F.F. Randolph Jr. Speakers Fund through the generosity of Sanjay and Leslie Patel.