Inspired by the Animal Law Seminar

Natalia Rocha ’17 LL.M. argues that animal rights should be equivalent to human rights, and takes up the cause in her native Brazil.

When Natalia Moraes Rocha ’17 LL.M. returned to her native Brazil this summer, she embarked on a new career: as a staff attorney for Mercy for Animals, an international organization dedicated to preventing cruelty to farmed animals and promoting compassionate food choices and policies. “It was one of the the happiest days of my life when they offered me the job,” says Rocha, who had previously worked for five years at the Brazilian Development Bank as a lawyer focused on government infrastructure projects and the privatization of government-owned companies.

When Rocha was researching LL.M. programs in the U.S., she was intrigued by Columbia’s Animal Law seminar. Her curiosity led her to the Mercy for Animals website—and an epiphany: “I decided to dedicate myself to this area of law, and the seminar is why I chose Columbia,” she says.

Although the course, taught by Lecturer-in-Law Mariann Sullivan, is only offered in the spring, Rocha sought Sullivan’s advice about what courses to take even before she arrived at the Law School. Together, they designed a curriculum that would prepare Rocha to be an animal rights activist. “I studied nonprofit organization, environmental law, constitutional, and administrative law,” she says. “But the seminar was critical. It provided a deep knowledge of all the ways animals are used today, and all the legal possibilities to advocate for them.”

During her time at CLS, Rocha became committed to the cause of animal rights. “This past year has changed me,” she says, explaining that she switched to a vegan diet, gave away her leather handbags, and stopped wearing wool coats. “I am against any animal use. I believe that the lives of all animals, humans or nonhumans, should be equally respected by humans and protected by law. Besides, I’ve learned that every animal use causes suffering.”

In the seminar, Sullivan, whose activism includes hosting the Animal Law Podcast, encouraged Rocha to propose legal remedies for protecting animals. In her final seminar paper, “The Ideal Relationship Between Human and Nonhuman Animals,” Rocha vigorously argued that animal rights are analogous to human rights, and even proposed an amendment to the U.S. Constitution to protect nonhuman animals.

Sullivan was impressed by Rocha’s spirited scholarship. “In her final paper, she did not skirt the hard issues,” says Sullivan. “The implications of putting into practice an ethic of fairness and compassion when it comes to animals requires considering substantial social upheaval, and Natalia confronted that squarely and creatively.” 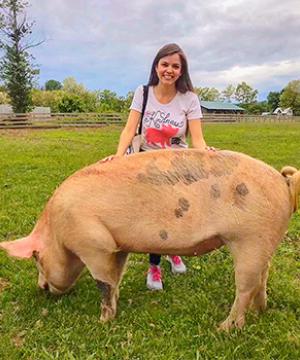 Moreover, Rocha put theory into practice as an LL.M. student by doing pro bono legal work for the Animal Legal Defense Fund. She was also a Mercy for Animals fellow on campus, distributing vegan dining guides, gathering “Meatless Monday” pledges, and organizing lectures and screenings of documentaries such as Cowspiracy. And she’d encourage classmates to try some of her favorite vegan restaurants, such as Candle Cafe West, Peacefood Cafe, Double Zero for pizza, and Blossom.

“It was a particular pleasure to see her passion for the subject—and for the animals—quickly blossom into action, as she took a leadership role in the Law School’s animal rights community,” says Sullivan. “It’s a special moment for a teacher to see one’s students re-envisioning the world in new and positive ways, and knowing that they will leave law school determined to turn that vision into reality.”

Now living and working for Mercy for Animals in Brazil, Rocha is dedicated to changing the attitudes of Brazilians, who are among the biggest consumers and producers of meat in the world. “My core activity is to advocate on behalf of farmed animals in Brazil, which includes providing legal support to Mercy For Animals’ investigations, corporate outreach, and education campaigns and working with lawmakers and advocates for stronger animal protection laws,” she says. “I can be a voice for animals in my country, and I completely owe that to Columbia.”