The first debate will take place on Oct. 24, 2012, at the Kaufman Center in New York City as part of the debate series’ fall 2012 season. Glenn Hubbard, Dean of Columbia Business School, will be one of the four panelists discussing domestic tax policy. A second debate will be held in the spring of 2013.

The public policy focus of Intelligence Squared makes it a fitting partner for the Richman Center. The program seeks to promote public discourse by presenting intellectually responsible points of view on both sides of contentious issues. Panelists are among the world’s leading authorities in their areas of expertise, with two arguing for and two arguing against a carefully worded motion. Members of a live audience vote electronically both before and after the debate to determine the winning side.

The Richman Center was established in 2011 with a $10 million grant from the Richard Paul and Ellen S. Richman Private Family Foundation to promote evidence-based public policy and foster dialogue and debate at the intersection of business, markets, and the law. Richard P. Richman ’72, MBA ’73, (below) is chairman of The Richman Group, one of the largest owners and developers of rental housing in the nation. 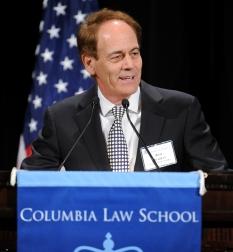 “The year was a big success, setting the foundation for future growth,” said Edward R. Morrison, the Harvey R. Miller Professor of Law & Economics and co-director of the center with Christopher J. Mayer, the Paul Milstein Professor of Real Estate at the Business School. “We hosted lectures by prominent guest speakers, as well as conferences and faculty workshops that brought together experts in a variety of topics related to business and the law.”

For example, a full-day conference on financial markets in late March, titled “Financial Risk and Regulation: Unfinished Business,” featured Law School and Business School faculty members—as well as representatives of top law firms and organizations such as the World Bank and the International Monetary Fund—discussing the impact of the Dodd-Frank financial reform law and Basel III capital requirements for U.S. financial institutions. The conference was organized by Charles W. Calomiris, the Henry Kaufman Professor of Financial Institutions at the Business School, and Ira Millstein ‘49, a senior partner at Weil, Gotshal & Manges.

Additionally, Law School and Business School faculty members were among the experts who led a series of workshops sponsored by the Richman Center.

Looking ahead, Morrison said the Richman Centers hopes to support research and collaborative teaching by professors at both schools, as well as to introduce new courses that will further discussion among students about important policy questions.