Indian Point: Safe, Secure and Vital or an Unacceptable Risk?

New York, Mar. 6, 2012—In 2007, Entergy Corporation, owner of the Indian Point nuclear power plant, 30 miles north of New York City in Buchanan, N.Y., applied to the Nuclear Regulatory Commission for 20-year license extensions on its two nuclear reactors. Opponents of relicensing maintain that the aging plant poses real risks, and that the electricity it provides can be replaced. Supporters say the plant is safe, and that the New York region cannot do without the power.

On March 1, four experts debated some of the issues at stake at a forum on the future of Indian Point held at Columbia Law School and moderated by Michael Gerrard, Andrew Sabin Professor of Professional Practice and director of the Center for Climate Change Law. Paul Gallay, president of Riverkeeper, and Ashok Gupta, director of energy policy for the Natural Resources Defense Council, want Indian Point retired. Arthur “Jerry” Kremer, a founder and chairman of the New York Affordable Reliable Electricity Alliance, and John Kelly, retired director of licensing for Indian Point, support relicensing.

Indian Point “never should have been built so close to New York City and 20 million people and could not be built there under today’s rules,” wrote former 14-term New York State Assemblyman Richard Brodsky in the Huffington Post recently. Nevertheless, today Indian Point’s two reactors, which began operating in 1974 and 1976, generate up to 30 percent of New York City and Westchester’s power.

The relicensing hearing will begin later this year, with a decision expected in late 2012 or early 2013.  Riverkeeper, New York State and other groups, will challenge the relicensing on issues ranging from leaking buried pipes and metal fatigue of reactor components, to contamination of the Hudson River from radioactive waste leaks, and the plant’s impacts on endangered species. Contrary to what one might expect, the license renewal process focuses only on environmental effects and physical plant safety. The plant must demonstrate that its physical structures and systems can be maintained safely for another 20 years.

Issues related to nuclear waste storage, terrorism, population density and evacuation plans, and seismic hazards are not considered in the relicensing review. 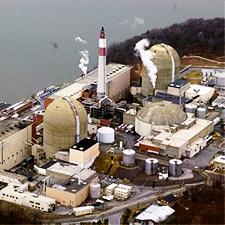 Indian Point has a significant impact on Hudson River ecology. A billion plus aquatic organisms (fish, fish eggs, larvae shrimp, crabs) are killed each year as Indian Point sucks in 2.5 billion gallons of Hudson River water each day to cool the plant (nearly twice the amount of drinking water consumed daily by all of New York City). The New York State Department of Environmental Conservation ordered Entergy to install closed-cycle cooling at the plant, which would reduce fish mortality by about 95 percent, but Entergy challenged the ruling. Consequently, in 2010, Indian Point was denied a critical water quality certification because the plant continues to harm aquatic life in the Hudson; Entergy is now challenging the denial.
Indian Point nuclear power plant from above.

According to Riverkeeper’s Gallay, the wedgewire screen alternative that Entergy has proposed to protect fish has never been installed at a nuclear facility, and is 30 to 40 percent less effective at controlling damage to fish. In addition, water used for cooling the plant is released back into the river at up to 110° F, 34 degrees above the river’s normal temperature. Riverkeeper contends that 40 years of these impacts on the ecosystem have contributed to the decline of 10 of the 13 keystone Hudson River fish species.

A General Accounting Office study done last year found that “as plants age and corrosion worsens, you’re going to have a larger risk to the heath and safety of people associated with this plant because of the risk of leaking buried pipes,” said Gallay. Kelly, the former licensing director, countered that nuclear plants always have components that break and need to be replaced. Entergy has invested hundreds of millions of dollars to upgrade the plant and make it safe, and “There is no facility in America that has been inspected as much as Indian Point by the federal government,” Kremer, of the electricity alliance, said.

Riverkeeper is concerned about fire safety at Indian Point. The plant lacks certain equipment normally used to meet the Nuclear Regulatory Commission’s fire safety regulations, relying instead on substitute measures such as manual operation of equipment; and only six out of the 30 fire zones inspected at the plant were in compliance with regulations.

Risks that will not be considered in the relicensing hearings include the problem of nuclear waste. Because the Yucca Mountain nuclear waste storage facility was cancelled in 2009, spent fuel pools holding nuclear waste at the 104 nuclear plants in the United States are overcrowded and there is nowhere to move the fuel to. In 2005, the National Academy of Sciences told Congress that the spent fuel pools at nuclear reactors in this country are vulnerable to terrorist attack. When Gerrard asked Kelly if the spent fuel pools at Indian Point could withstand an airplane strike, he answered, “I don’t see how you could aim a plane to hit a target 20 feet square between large other buildings. Theoretically I suppose it’s possible, however.” 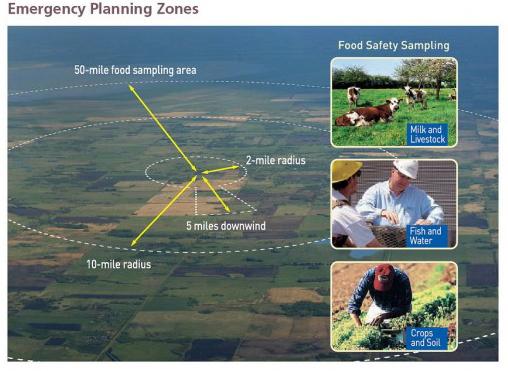 The evacuation plan for Indian Point was deemed inadequate to protect the public by James Lee Witt, former head of the Federal Emergency Management Agency. According to Witt’s 2003 report, commissioned by Governor Pataki, the 10-mile plan does not provide the structures and systems necessary to protect the public from radiation exposure, nor does it consider the reality and impacts of spontaneous evacuation.

Citing the evacuation of an Ontario city of 217,000 after a train containing chlorine derailed, Kelly argued, “If an evacuation is necessary, it can be done even without detailed plans. We have detailed plans out to 10 miles for all nuclear power plants in this country.”

In the wake of Japan’s nuclear crisis at Fukushima, more attention is being given to seismic risk at nuclear power plants. Columbia University found that Indian Point sits on two fault lines, and that a 6.0 or 7.0 earthquake is possible. In August 2010, the Nuclear Regulatory Agency ranked all U.S. nuclear plants according to the risks of an earthquake causing catastrophic failure—surprisingly, Indian Point tops the list. If there was a Fukushima level accident at the plant, said Gallay, “5.6 million people would have to either shelter in place or evacuate…an area from the plant down to the George Washington Bridge would become uninhabitable…”

Kelly responded that an independent plant evaluation performed in 2008 “concluded that the seismic design of the plant was sufficient and appropriate.” He noted that Fukushima actually survived the earthquake—the tsunami caused the disaster, and this could not happen on the Hudson River. The Nuclear Regulatory Commission recently asked eastern and central U.S. nuclear power plants to re-evaluate their seismic hazards based on a new seismic study by the Electric Power Research Institute.

A key question is: Could we replace the 2,000 megawatts that Indian Point produces?  “This city and this state need more power today, not less power…It is easy to say what we can replace, but the facts don’t support the concept,” said Kremer. Nuclear energy is considered “clean” because nuclear reactors don’t emit CO2; however, the life cycle of nuclear power (mining, refining, transportation, storage, etc.) does use an enormous amount of energy usually derived from fossil-fuel burning plants that produce CO2.

The Charles River Associates study commissioned by New York City found that most scenarios for replacing Indian Point’s power would result in a 15 percent increase in CO2 emissions. Kelly expressed concern about additional pollutants that would exacerbate respiratory ailments, “… the 75,000 tons of sulfur oxides, the 23,000 tons of nitrogen oxides, the 2,000 tons of particulate matter of 10-micron diameter that would be spewed into the environment in the Hudson Valley and New York City air.”

No source of energy is risk free—there are always tradeoffs, acknowledged Gupta, of the Natural Resources Defense Council. “The idea is to have an integrated system so you can have all of these different sources combining to meet our energy needs,” he said.

According to a report by Synapse Energy Consultants, the system has enough surplus electricity in it to be able to meet our electricity needs without having to relicense Indian Point. And while there may be cost tradeoffs (increases of 1 to 3 percent), there are many options to choose from, including upstate wind, offshore wind, solar, increased transmission capacity, the repowering of existing natural gas plants, and the greatest resource of all—energy efficiency, since we waste 20 to 30 percent of the energy we use.

“We want there to be as much additional capacity, not 2,000 but up to 5,000 megawatts of additional resources,” said Gupta, “so that we can not only meet our demand growth—we think efficiency is the best way to meet that demand growth— but also replace existing dirtier generation.” 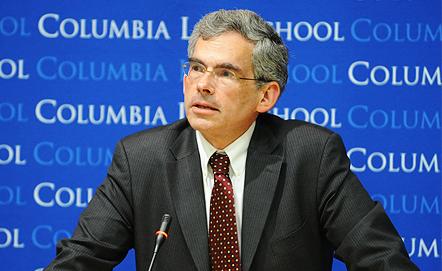 According to Gerrard (pictured left), “The decision about the future of Indian Point raises very interesting trade-offs. Electric rates, reliability, greenhouse gas emissions, vulnerability to accident or attack, and the health of the Hudson River ecosystem are all at issue, and the facts as to each are contested. We were very pleased to be able to present the views of experts on each side so that members of the audience could draw their own conclusions.”

To learn more about the issues, visit Riverkeeper and the Indian Point Energy Center. A video of the forum has been posted here.