On a bright Friday morning in Washington Heights, half a dozen people anxious about their immigration status wait in chairs that line three walls of the small, peach-colored office of the Northern Manhattan Coalition for Immigrant Rights (NMCIR). Students from the Law School’s Immigrant Representation Project (IRP) are working to give some of them a second chance to remain in America.

The visitors represent a few of the millions of families in New York affected by stricter immigration laws passed in 1996. Although lawful residents had long been subject to deportation for criminal convictions, the 1996 laws – the Antiterrorism and Effective Death Penalty Act and the Illegal Immigration Reform and Immigrant Responsibility Act  – make deportation mandatory in a larger class of cases. These laws also automatically place permanent residents convicted of a broad array of crimes in detention following the completion of any criminal sentence.

Many people have come to the NMCIR after consultations with private lawyers who charged enormous fees and promised successful outcomes they couldn’t secure, said Jeannette Matos, immigration program coordinator at the coalition.

"There's not a lot we can do on the criminal cases,” she continues. “When they come here, they get a consultation, [and] we come to a conclusion" on whether or not NMCIR can assist them.

The Columbia law students are part of the Immigration Defense Externship, a new externship led by Maria Navarro, an attorney for the Legal Aid Society, which oversees the project with the NMCIR. The externship gives 2Ls and 3Ls the opportunity to consult with potential clients at this walk-in neighborhood immigration clinic, which primarily serves the Dominican community.

New York City has one of the largest immigrant populations in the country, with foreign-born persons representing 35.9 percent of the total population. Changes in laws and regulations are keenly felt in communities like Washington Heights, where more than half of the residents are Hispanic or Latino and do not speak English at home. While most NMCIR clients are Dominican, increasing numbers of Latin Americans and Africans are finding their way to the office.

On this day, Columbia students Sylvie Goursaud ’07 and Cristina Quintero ’08 screen potential clients in a room the size of a walk-in closet. A woman attempting to help her son who is jailed in New Jersey looks down at her lap when they ask for basic background information. With hesitation, she produces some letters from her son. Interviewees are often fearful to talk about their situation; this is the same information the government might use to deport them or a loved one.

Students later say they will not take her case because the program does not have the resources to represent immigrants detained out of state. They will research whether he is eligible for relief and refer the mother to someone who might be able to help her, Ms. Navarro said.

"Unfortunately, because the laws are so tough, sometimes a person will come in on behalf of a family member and we can figure out through court papers that they don't have any relief available," said Ms. Navarro, a Mexican immigrant who grew up in Washington Heights. She has been representing immigration cases at the Legal Aid Society since 1998. If detainees are eligible for release, their cases are referred to other Legal Aid attorneys for representation or pro se advice.

One victory at a time

A client identified as Ms. B is one of the project's recent success stories. She has lived in the United States as a legal resident since 1967, when she arrived as a four-year-old with her parents. But Ms. B faced deportation last year because of drug possession convictions from the late 1980s. The deportation proceedings were triggered by a 2005 visit to her dying grandmother in the Dominican Republic. On Ms. B’s reentry to the United States, she was stopped by the Immigration and Customs Enforcement.

She came into the NMCIR office last summer, and Ms. Navarro agreed to represent her, with students from the externship. Michael Rosado ’08 and Gabriel Reyes ’08 were assigned to develop a factual background, a kind of condensed biography presented to a judge. It highlights the extenuating circumstances of a potential deportee and an explanation of why he or she deserves to stay in the United States, in spite of any convictions.

The background revealed a troubled home life, which included physical and emotional abuse by Ms. B’s parents and led her to drugs, alcohol and a rough group of friends. She eventually contracted AIDS. In 1990, in an attempt to take back her life, she enrolled in a detoxification program. She moved with her daughter to Pennsylvania to remain clean and drug-free, and a pastor provided them with a place to live – a local women's shelter – and community support. She received counseling, became actively involved in her church, and in 1994 married a fellow church member who also had AIDS. Ms. B nursed him until he died from the illness in 2000.

Ms. B subsequently moved back to New York City. Her daughter is currently attending a college in upstate New York, while Ms. B is working towards her GED and a nursing degree.

“We brainstormed about what factual background we wanted to bring out,” recalled Mr. Rosado He and Mr. Reyes developed affidavits and direct examination questions for Ms. B’s parents and sisters, who could testify about her troubled childhood. Because Ms. B’s employment history was incomplete, Mr. Rosado contacted her deceased husband's former employers in Pennsylvania to affirm that she had been a housewife and stay-at-home mom during those years. He also researched the availability of medical clinics for HIV-positive people in the Dominican Republic.

“If she would have gone back there, she wouldn't have had any treatment,” said Mr. Reyes, whose mother emigrated from the Dominican Republic in 1972.

In November 2006, Ms. B appeared in the New York Immigration Court with Ms. Navarro and the Columbia Law School students. Because Ms. B's convictions occurred before the passage of the more severe immigration laws, she was eligible for a waiver of the deportation requirement. A federal immigration judge said he saw no need for further hearings and granted the waiver allowing Ms. B. to stay in the country. He noted that the evidence the students put together helped convince him to grant Ms. B a second chance in this country.

“She got her day in court,” Mr. Rosado said, “the day in court that most people don’t have.”

Like other clinical programs, the one-semester externship includes a weekly seminar that complements student fieldwork. Ms. Navarro, who is also a fellow at Columbia Law, has invited guest speakers including a New York Times reporter, an immigration judge, activists and a government attorney and investigator from the Immigration and Customs Enforcement.

The speakers provide a range of perspectives on this issue, Navarro said. “We try to give students a well-rounded view of the immigrant defense process.”

Elizabeth Stull is a freelance writer whose articles have appeared in the New York Law Journal and other legal publications. 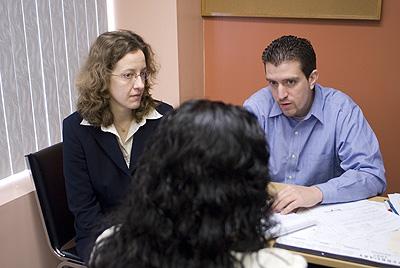 Sylvie Goursaud '07 and Michael Rosado '08 interview a client at the
Northern Manhattan Coalition for Immigrant Rights. 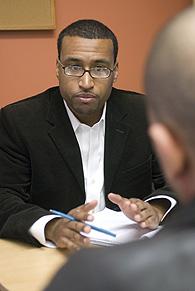 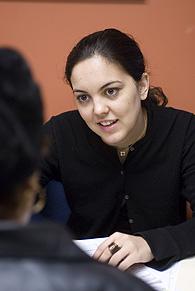