Human Rights Advocates Struggle for Independence, Respect at United Nations
Media Contact:
Public Affairs Office, 212-854-2650 [email protected]
New York, Dec. 1, 2010--The United Nations still has a long way to go toward ensuring that human rights is part of the conversation when it works to resolve global conflicts and crises, according to a prominent U.N. human rights official.
Assistant Secretary-General Ivan Simonovic, the New York representative for the U.N. High Commissioner for Human Rights, told a Columbia Law School audience Nov. 10 that his office does not have “full independence” within the U.N., where it is partially controlled by the member states. 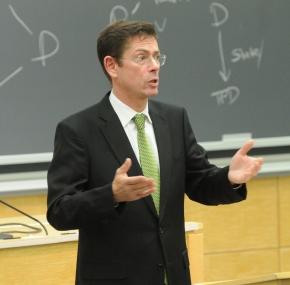 “We try to be more autonomous than a number of states would like us to be,” Simonovic (left) said, during a talk sponsored by the Law School’s Center on Global Governance, run by professors Richard Gardner and Michael Doyle.
Simonovic said it was no accident that the UNHCHR is headquartered in Geneva, instead of New York, in an effort by some nations to reduce its influence. He said that makes his role all the more vital.
“I try to be a bridge. I try to be a human rights voice here in New York, where crucial human rights decisions are being made,” he said.
Simonovic has served in a variety of positions linked to his current role, including Assistant Secretary-General for Human Rights, and has also served in a variety of leadership posts in Croatia, including Minister of Justice. He also served as Croatia’s U.N. representative for six years.
The UNHCHR supports human-rights efforts in about 50 locations, either through its own offices in countries like Angola, Cambodia, and Mexico, and as part of U.N. peacekeeping operations across the globe. Still, Simonovic said there are other places where his office is needed—if only it could get access.
“Simply, in some countries, we are not welcome, and there is no way we can impose ourselves,” Simonovic said.
Columbia Law School, founded in 1858, stands at the forefront of legal education and of the law in a global society. Columbia Law School joins its traditional strengths in international and comparative law, constitutional law, administrative law, business law and human rights law with pioneering work in the areas of intellectual property, digital technology, sexuality and gender, criminal, national security, and environmental law.
Visit us at http://law.columbia.edu
Follow us on Twitter http://www.twitter.com/columbialaw