The founding director of the International Legal Program of the Center for Reproductive Rights receives award at 38th Annual Myra Bradwell Banquet.

Anika Rahman ’90 has devoted her career to championing human rights and social justice across the globe. Born into what she describes as an “iconoclastic” secular Muslim family in Bangladesh, she has held leadership roles at the Ms. Foundation for Women, the Rainforest Alliance, the Center for Reproductive Rights, and Friends of UNFPA (United Nations Population Fund).

“My story is about not being stereotyped by culture, religion, or ethnicity,” Rahman told the 130 students, alumni, faculty, and friends who gathered in Columbia University’s Low Memorial Library for the 38th Annual Myra Bradwell Banquet on March 5. “I have always known what it is like to be the other. There is no choice but to be the other—that feeling of ‘this is not right, and I have to set it right.’”

Organized by the student-run Columbia Law Women’s Association, the dinner celebrates women in the legal profession who have paved the way for female lawyers. The event also honored Myra Bradwell Note winner Christina Zhang ’18, whose note, "Biopolitical and Necropolitical Constructions of the Incarcerated Trans Body," will be published in the Columbia Journal of Gender & Law.

Rahman fled Bangladesh with her family when she was 18. She studied international relations at Princeton before attending Columbia Law and pursuing a legal career that included founding the International Legal Program at the Center for Reproductive Rights and serving as president and CEO of Friends of UNFPA. While there, she provided family planning services for underserved populations around the globe and helped draft a model reproductive rights law in sub-Saharan Africa.

She was clearly delighted to be back on the Columbia campus. “Whenever I walk down the main campus, I feel a surge of energy,” Rahman said after being introduced by Fabiola Urdaneta ’19, co-chair of the event with Allison Pearl ’19.

In her speech, Rahman cited Myra Bradwell’s life as a great example of the resilience that women lawyers have always had to cultivate and still do. Though Bradwell was trained in the law, she was denied admission to the Illinois bar in 1870 because she was a married woman. Bradwell appealed to the Illinois Supreme Court, which upheld the bar association’s decision. It wasn’t until 1890, a few years before Bradwell died, that the Illinois Supreme Court granted her license. “Was it really because she and others were not good enough?” Rahman asked. “Of course not! Don’t internalize failure. Learn from it and focus on your achievements.” 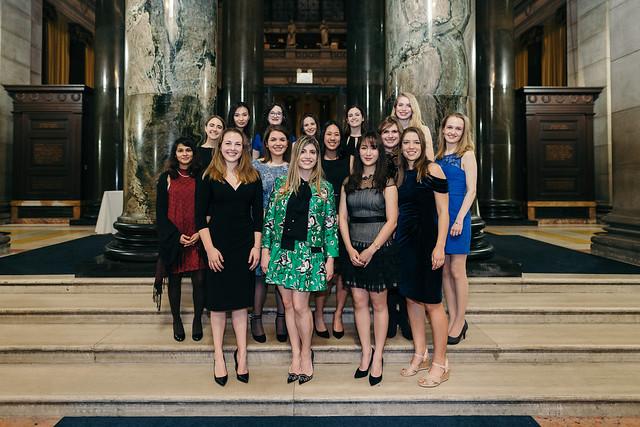 In her address at Columbia, Rahman discussed how personal and professional lives are inextricably interwoven. “Your life choices will influence your professional journey,” she said. “Understand that your most intimate personal choices have a profound influence on your career. This runs the gamut from your decisions about if you want a partner to who that partner is and whether you decide to have a family.”

Rahman encouraged the students and attorneys in the audience to take a long view of their careers. “Incorporate that awareness into the choices you make about what work you undertake, how, and when,” she said, advising women to find and become mentors to “support one another.”

She cited contemporary pioneers such as Sandra Day O’Connor, the first woman on the U.S. Supreme Court, and Loretta Lynch, the first African-American women to serve as attorney general of the United States. “Each of us is part of this arc of history,” Rahman said. “We stand on powerful shoulders, and in time we too shall be the ones on whose shoulders future generations stand.”