The Human Candle of Columbia Law School: the Life and Legacy of Louis Henkin are Celebrated

The ?Human Candle? of Columbia Law School: the Life and Legacy of Louis Henkin are Celebrated
Media Contact:
Public Affairs Office, 212-854-2650 [email protected]
New York, Apr. 8, 2010—They came to remember a revered colleague, a devoted friend, and an inspirational mentor. To many people, University Professor Emeritus Louis Henkin was all three.
After introductory remarks from David M. Schizer, Dean and the Lucy G. Moses Professor of Law (below right with Henkin's widow Alice) 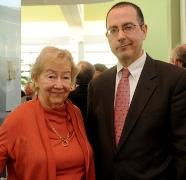 , speakers at a March 28 memorial service for Henkin lovingly recalled him as part of the essential fabric of Columbia Law School for nearly half a century. They told of a man whose iconic status as a pioneer of human rights law was exceeded only by his humility and grace. 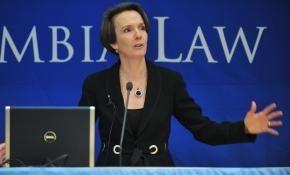 “I think that what struck most people about Lou was his disarming personal warmth, modesty and humanity,” said Sarah Cleveland, (left) the Louis Henkin Professor in Human and Constitutional Rights. “They were expecting an intellectual terror and they found a huge welcoming smile.”
The memorial in Jerome Greene Hall was part of a day of events to celebrate the life and legacy of Henkin, who died Oct. 14 at age 92.
“He spoke with grace, wit, gentleness, brilliance and wisdom, and he left us wanting to emulate his thoughtfulness, thoroughness and deep commitment to the protection of every individual,” said Judge Rosemary Barkett of the U.S. Court of Appeals for the Eleventh Circuit, a close friend who also taught with Henkin.
Henkin was credited with essentially founding the study of human rights law, after realizing there was a system of beliefs and principles insufficiently addressed by the existing body of constitutional and international law. His scholarship was at once provocative and hugely influential, and remains so today, said Harold Hongju Koh, the Legal Adviser of the U.S. State Department.
“Of the many international lawyers I have known, Lou was the greatest,” Koh said. “There was nothing he did not know, whether it was public international law, foreign affairs, national security or human rights. Lou’s words mattered more than others. When the stakes were highest, even the experts wanted to know what does Henkin think? They looked to Lou to tell them what was right.”
Lori Damrosch, (right) 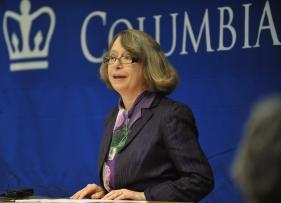 the Henry L. Moses Professor of Law and International Organization, said Henkin’s insights could have proved especially useful at a time when the U.S. intervention in Libya has been called into question. Damrosch noted that Henkin, who received a Silver Star while in the Army during World War II, was not a pacifist.
“He knew that armed force may be necessary to combat radical evil, but he firmly believed in adherence to the U.N. Charter’s prohibition on the use of deadly force subject to only the limited exceptions contemplated in the charter,” Damrosch said.
Former Law School Dean David Leebron, who taught with Henkin and co-authored a human rights law textbook with him, said Henkin was “one of those human candles” who turned Columbia into “a law school with a soul, a law school that cared as much about what was right as about what the law is.”
“Lou, as I pictured him, stood at the intersection of what is right and what is important,” said Leebron, now the president of Rice University. “The nobility of law could not be divorced from the compassion of human beings.”
Such principles were reinforced to countless lawyers, judges, scholars, and students without fear or compromise, with an unerring sense of logic and precision that Cleveland said was developed during his days as a mathematics major in college.
“I once went to Lou’s office to get comments on an article I was writing,” said Cleveland, currently on leave as a legal adviser to the State Department. “When I emerged two hours later we had only gotten through the table of contents.”
Peter Rosenblum ’92 LL.M., the Lieff, Cabraser, Heimann & Bernstein Clinical Professor in Human Rights, and the co-director of the Law School’s Human Rights Institute, also remembered Henkin was generous with his time and insights, especially with students who approached human rights with the same vigor he did.
“Lou told many of us that he intended to live forever,” Rosenblum said. “Now it falls to us to make that true.” 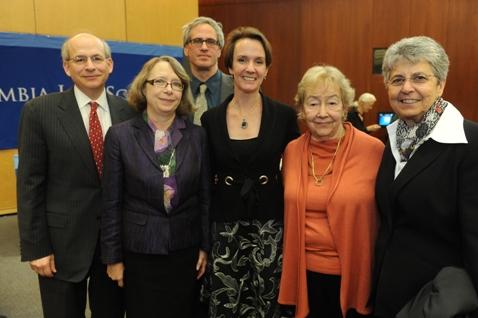