How Policy Can Often Trump Politics in the White House

Media Contact:
Public Affairs Office, 212-854-2650 [email protected]
New York, Sept. 22, 2010— Many people view the White House as a political cauldron where any and all policy positions are thrown into a pot of partisan stew.
But the recipe for policy-making is often far more complex, with a mélange of rules, regulations, and other policy considerations that become part of the mix. It’s a world that Lecturer-in-Law Jay Lefkowitz ’87 knows well, having served in the West Wing as a policy expert for both presidents Bush.
“Presidents just don’t get to make decisions on their own in a vacuum,” Lefkowitz said. “They are circumscribed by a network of laws, starting with the Constitution.”
Lefkowitz, right,  teaches Administrative Law and the White House, a seminar where students are exposed to major policy issues that confront the president. They learn how decisions made must first take into account questions of rulemaking and regulatory authority, which often trump their political implications. 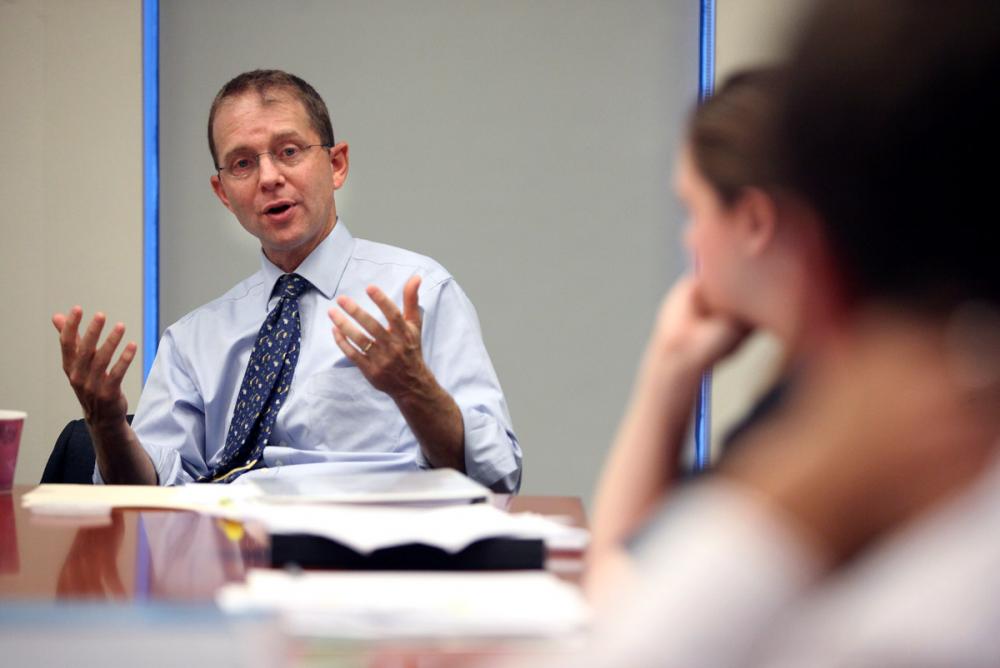 Now a senior litigation partner and member of the management committee at Kirkland & Ellis in New York, Lefkowitz served as Deputy Assistant to President George W. Bush for Domestic Policy, and as General Counsel in the Office of Management and Budget. He also worked as Director of Cabinet Affairs and Deputy Executive Secretary to the Domestic Policy Council for President George H.W. Bush.  He also has government experience outside the White House, as the U.S. Special Envoy for Human Rights in North Korea. 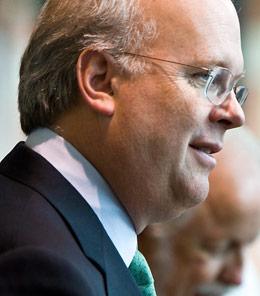 One of his West Wing neighbors during his most-recent stint was Karl Rove, left, the highly influential deputy chief of staff and senior advisor who coordinated White House policy-making. While in New York last year, Rove made an unannounced appearance at Lefkowitz’s seminar.
“Jay is so bright and his mind is so quick,” Rove said. “He sees several layers deep. It was intellectually stimulating to be with him in meetings.”
Rove said he was struck by the “very high quality” of the students in the class. “They were very interested in how the White House settles on policy. They were interested in the nuts and bolts.”
Also visiting last year was Douglas Feith, one of the top Pentagon policy-makers under the latter President Bush and an Iraq war architect. Lefkowitz said other high-profile guests may appear this semester, depending on their schedules.
Back when he attended the Law School, Lefkowitz said he initially knew little about what lawyers did in the White House, so he wants to give students “an appreciation” for what it is like to advise the president on legal issues and work with other lawyers elsewhere in the Executive Branch.
As part of the course, students engage in role-playing, with some acting as White House lawyers, while others take on the guise of lawyers for a federal agency.
“Agencies are a highly structured and bureaucratic environment. The White House tends to be less structured and free-wheeling,” Lefkowitz said.
After looking at issues of executive power and the regulatory function of the White House, students will examine various hot-button issues, such as detention of terrorism suspects, gays in the military, and stem-cell research funding. They will then study the various legal factors in play with those issues, how they influence the decision-making process, and what are the consequences of those decisions.
Not surprisingly, Lefkowitz, who looks back on his White House tenure as “so much fun,” notwithstanding workdays that could stretch 14 hours or more, is an advocate of spending at least part of a legal career in public service.
“It’s an extraordinarily fulfilling way of serving one’s country,” Lefkowitz said. “The issues you deal with are some of the most fascinating and meaningful you can deal with as a lawyer.”
Columbia Law School, founded in 1858, stands at the forefront of legal education and of the law in a global society. Columbia Law School joins its traditional strengths in international and comparative law, constitutional law, administrative law, business law and human rights law with pioneering work in the areas of intellectual property, digital technology, sexuality and gender, criminal, national security, and environmental law.
Visit us at http://law.columbia.edu
Follow us on Twitter http://www.twitter.com/columbialaw