How Mindfulness Enhances a Legal Career

When New York State Attorney General Eric T. Schneiderman wakes up each morning, he decides between two options: turn right, toward his computer, to be sucked into a never-ending stream of work and emails, or turn left, toward a quiet place in his apartment, to meditate for a few moments before beginning a hectic day as the state’s top lawyer. After short deliberation, most mornings, he turns left.

“Working on your mind is something that makes you more effective as a lawyer, more effective as a political leader,” explained Schneiderman, who visited Columbia Law School on Oct. 18 to share his personal experience with mindfulness—and its effect on legal practice—with students and faculty members. “Slowing down to be thoughtful—not just taking your initial reaction—is a part of good decision making, and good strategic awareness as a lawyer.”

By definition, mindfulness is the mental state achieved by focusing one’s awareness on the present moment—paying close attention to feelings, thoughts, and sensations, without judgment. Schneiderman’s relationship with mindfulness and meditation goes back more than 40 years, when he was an undergraduate student at Amherst College studying under the renowned scholar of Buddhism, Robert Thurman, now a Columbia University professor.

Invited to campus by Caroline Voldstad ’18—head of the Law School’s yoga club and a campaigner for bringing mindfulness practice to students to help manage the stresses of attending law school—Schneiderman was joined in his discussion by Professor Elizabeth Emens, an experienced meditator who recently finished a program at the University of Massachusetts Medical School’s Center for Mindfulness. Professors Suzanne B. Goldberg and David Pozen rounded out the discussion panel. 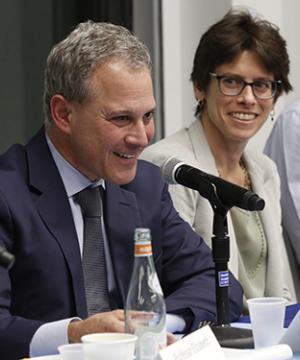 “Lawyers especially need critical judgmental capacities, but what we do with that, rather than apply it constructively, is to ruminate, to worry, and have that take over the space that would otherwise be doing creative work, for ourselves and for the world,” said Emens, an Isidor and Seville Sulzbacher Professor of Law at the Law School who leads a mindfulness meeting for several faculty members each week. “A lot of people’s experience is that there’s an on-switch, and the on-switch is overdrive, and then there’s sleep. Part of this is to try to make it more comfortable to be somewhere in between.”

Goldberg, the Herbert and Doris Wechsler Clinical Professor of Law and Columbia’s executive vice president of the Office of University Life, was first introduced to mindfulness practice through Emens. Though she does not practice often, Goldberg said she finds mindfulness to be a “little five-minute vacation in the middle of a hectic day.” One of the nation’s foremost experts on gender and sexuality law, and a leading advocate for the LGBTQ community, she explained to students how being mindful has enhanced her legal skills.

“It’s very hard to actually listen to what the other person is saying, and not just zip ahead to the next argument,” Goldberg said. “But summoning the ability to pause and truly listen is a skill that is fostered by being mindful. Mindfulness absolutely strengthens me as a lawyer.”

A mindfulness novice, Pozen was invited to the panel to provide a non-practicing voice to the discussions. Though open to absorbing the insights of his colleagues and the attorney general, he questioned the universal benefits of mindfulness, saying he sees it as more of personal pursuit.

“A lot of the felt need, at least in a legal environment, for attaining greater mindfulness and inner peace comes from the awareness that we’re in a system that’s crushing in various ways,” Pozen said. “I appreciate the utility of [mindfulness] as a kind of backpack, but I have seen it as an individualistic exercise…What’s not being challenged is the system itself through collective action.”

In response, Schneiderman, who has practiced mindfulness throughout his legal career—including his time working in private practice and his 11 years as a state senator—said that personal transformation is what leads to social transformation.

“What does it mean to transform your consciousness if you’re not transforming society?” he asked. “That’s what you do to change the way people think about an issue or see an issue, or perceive their relationship to society.” 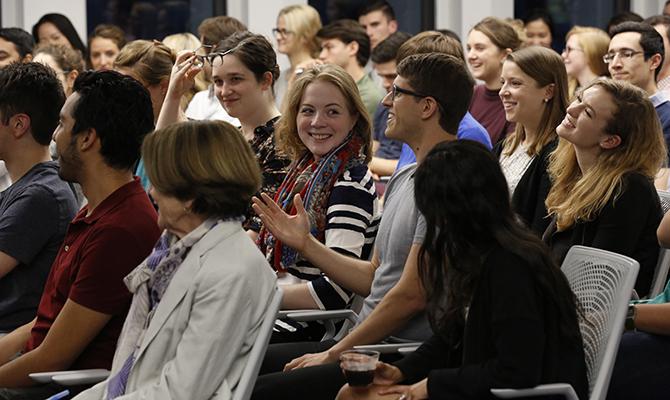 In addition to the panel discussion, the Law School is pursuing several initiatives to incorporate mindfulness techniques into the everyday lives of students, faculty members, and staff. For instance, Professor Peter L. Strauss, the Betts Professor of Law, incorporates meditative sessions into his Legal Methods course, which all first-year students are required to take. “It really increased our solidarity and sense of community, and also was an incredible way to ease into the material and clear your mind,” one student said at the panel discussion.

Voldstad, an organizer of the mindfulness event with the help of Social Justice Initiatives’ Director of Government Programs Rachel Pauley, also hosts guided meditation sessions each Monday morning. The Law School recently received funding to expand this program into a “sitting” series for faculty members, students, and staff beginning in January. In November, Emens will hold a lunchtime event to introduce mindfulness practice to Law School staff.

“Your consciousness is being transformed every day, whether you like it or not,” Schneiderman offered at the event. “This practice simply enables you to steer the boat a little tiny bit, instead of being just washed along.”