How Do You Sell Coffee To A Tea-Drinking Nation?

Press contact:
James O’Neill: 212-854-1584 Cell: 646-596-2935
[email protected]
A former Chinese government official from Beijing, Wang Jinlong ’88 knows what it’s like to be a coffee convert. His transformation didn’t occur until he joined Starbucks in Seattleas the head of the law and corporate affairs department in 1992, the year the company went public. One of the company’s roasting plants was attached to its corporate offices, and Wang found the aroma “beautiful” and “romantic.” But it took Starbucks Chairman Howard Schultz himself, after repeated visits to Wang’s cubicle, to convince him to try a cup.
“He would take me down to the roasting plant and tell me the coffee story and say, ‘You’ve got to try it, you’ve got to try it,’” Wang recalled. “And so I really started from there.” He was 35 years old. 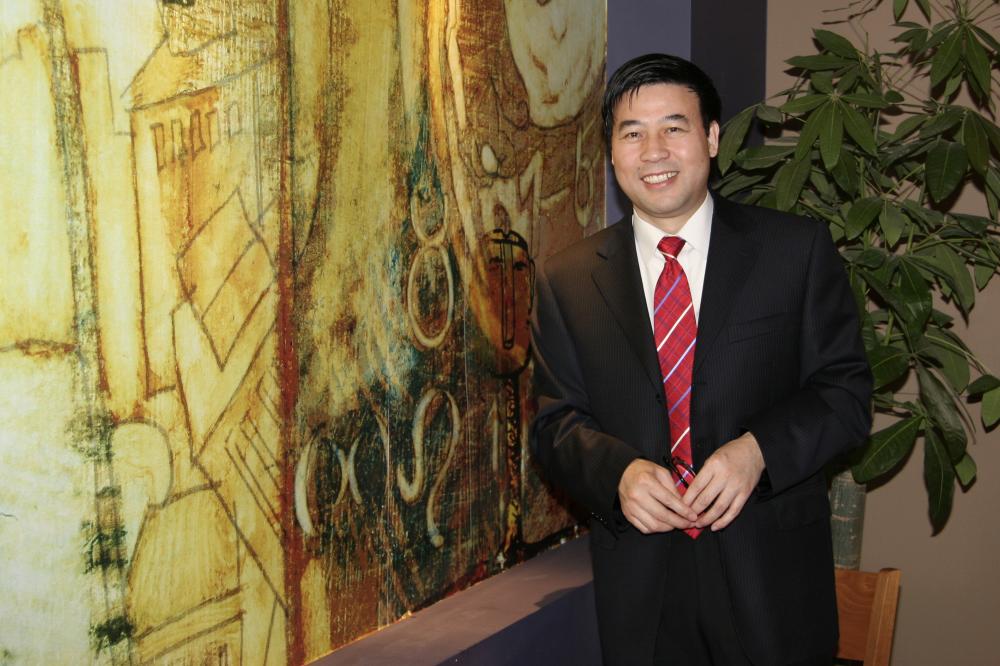 Today, Mr. Wang, 50, is the beverage’s biggest champion in China, the most famous tea-drinking nation in the world. As president of Starbucks in Greater China, which includes the Mainland, Hong Kong, Macau and Taiwan, Wang oversees the growth of the world’s fifth most recognized brand in what the company has pegged as its most important market outside of North America. Since opening in Taiwan in 1998 and then in Beijing a year later, Starbucks has expanded to nearly 500 outlets in Greater China. You can now buy Starbucks coffee at the Great Wall, in the Forbidden City and, in certain parts of Shanghai, on just about every street corner. But Starbucks – already the world’s largest chain of coffee shops, with more than 12,000 locations worldwide – is just getting started in China. Some analysts think that the Greater China market could grow to 10,000 shops, though there’s one obstacle: Of the more than 1.3 billion people living here, hardly any drink coffee.
Not to worry. “We have no intention of replacing tea, either. We just want to provide more choices for the people,” said Wang recently at Starbucks China headquarters in Shanghai.
After graduating from Columbia Law School, Wang’s plan was simple: a year at a Wall Street firm, some freelancing in Seattle, maybe Hong Kong, and then back to China.
He made it as far as Seattle, where he was working for the firm Preston Gates & Ellis and one of his clients was a small chain of 50 coffee shops. Soon Starbucks took up more than half of his time.
By 1995, he was on the team spearheading the chain’s international development. Job requirements: lots of travel, and lots of coffee consumption. Wang spent three-quarters of his time on the road and racked up around 200,000 frequent flyer miles a year. By 2000, the manic schedule caught up with him, and he decided to retire early (his Starbucks stock had appreciated some 1,300 percent by that time) and move back to China. He was fulfilling a “long cherished dream” and making good on a promise to his wife of 18 years, also a native of Beijing. “Sometime in 2000 I said, ‘Honey, it is time to go home,’” Wang said.
But retirement didn’t sit well with Wang. The boredom, he said, made him physically ill. Soon he was operating his own retail consulting firm, though he kept his eye on Starbucks’ progress in China.
“I told Howard [Schultz], ‘Hey, you are moving too slow here. There is only one speed in China: not fast, not slow, but faster.’” Schultz agreed, and in 2005 he convinced Wang to rejoin the company and overhaul its Greater China expansion strategy. In less than a year and a half, Wang added close to 200 stores.
Aiding the rapid pace is a recent change in Chinese policy. In 2004, as part of China’s World Trade Organization commitments, restrictions on foreign investment in retail operations were eliminated. Previously, companies like Starbucks had to enter into joint ventures with local companies in order to do business in China. Now, they are free to go it alone – and Starbucks has increasingly chosen to do so, all the while increasing its stakes in existing local partnerships.
Starbucks currently has 230 shops in 22 cities on Mainland China. One location in particular grabbed global headlines earlier this year – the Starbucks in the Forbidden City, the famous walled imperial palace complex in central Beijing that now operates as a popular museum. In January, a little-known anchor on China Central Television’s English-language station called the Forbidden City Starbucks “a symbol of low-end U.S. food culture” and “an insult to Chinese civilization” and started an online campaign to get rid of the inconspicuous 1,000-square-foot coffee shop that has been, off and on, a topic of controversy since it opened in 2000 after an invite from Forbidden City authorities. A couple of years ago, the shop removed almost all of its signage and has since closed.
“We absolutely respect the local culture,” insisted Wang, who said Starbucks is working with local officials to determine the future of the Forbidden City shop. “We were very low-key there. You couldn’t see our logo. We were there to enhance people’s museum-going experience.”
There have been no such complaints about Starbucks’ presence in Shanghai. With a population of 20 million, China’s most international city is home to more than one-third of the chain’s Mainland locations. On a Thursday afternoon in late April, a large, two-story Starbucks on Shanghai’s bustling Huaihai Road was overflowing — the smiling staff who say “hello” and “goodbye” (in English and Chinese) could barely keep up. Upstairs, there were no seats to be found. So who says the Chinese don’t drink coffee?
“A line from a Chinese poem best describes the situation,” said Hu Hongke, a retail analyst with China Merchants Securities in Shanghai. “‘The old man’s drunkenness lies not in the wine, but in the beautiful scenery.’ In fact the consumers are not necessarily at Starbucks for the coffee, but for the...atmosphere.”
Indeed, while most customers had a cup or mug placed in front of them, their attention was focused more on a laptop computer, a magazine or a companion. Over the course of a half an hour, several people didn’t touch their coffees at all. 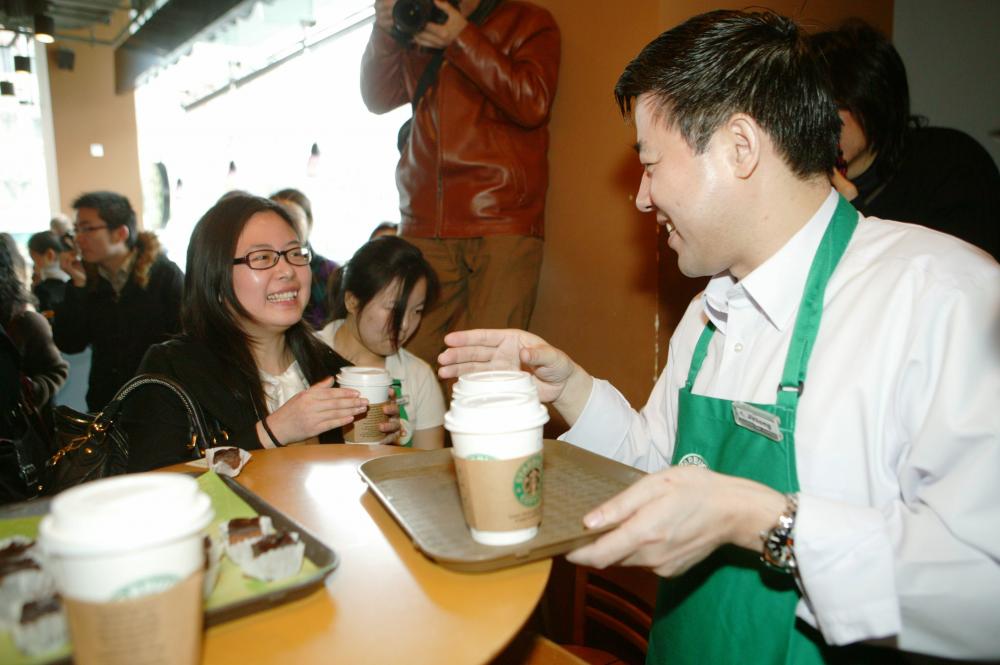 Wang Jinlong greets a customer at a Starbucks in China.

One of the patrons was Zhang Jian, a 30-year old Shanghai sourcing manager and translator who was sipping a tall Caffe Mocha and tapping away on his Powerbook. He represents the Starbucks demographic in China – young, white-collar, cosmopolitan.
“Starbucks is a good place to meet business partners or suppliers,” he explained.
What about the coffee? “Most of my friends don’t come here for the coffee itself,” he said. “They are here for the space and the vibe. I don’t really know what coffee is supposed to taste like — I only like it when it tastes like chocolate.”
The core offerings and decor at Chinese Starbucks are the same you would find anywhere else in the world, though the Chinese stores are often much bigger because, unlike Americans, 90 percent of Chinese consumers sip their beverages in the store. The reason is simple: Shops are increasingly places to see and be seen, and Starbucks is considered a luxury brand. At $3.60, a “grande” Caffe Latte costs about the same in China as in Seattle, and yet the average monthly salary in Shanghai is around $240.
Numerous coffee chains, like California’s Coffee Bean & Tea Leaf, have followed Starbucks into the China market, and there is some precedent for the coffee boom. From the 1930s until the Communist takeover in 1949, coffee culture mushroomed in Shanghai.
Wang is part of a generation that understands just how dramatic change in China can be. The son of textile factory workers in Beijing, Wang’s teenage years coincided with the Cultural Revolution. After junior high school, he was in a select group of students allowed to continue on to high school. When Chinese universities reopened in 1977, Wang was part of the first class back at Beijing’s University of International Economics and Trade, and worked at the Ministry of Foreign Economic Relationship and Trade as a liaison between the government and foreign companies looking to set up manufacturing plants in China. By 1992, when he decided to join Starbucks, his friends questioned the decision.
“They said, ‘A small coffee company? What are you doing?’” Wang recalled with a smile. They have since stopped asking such questions.