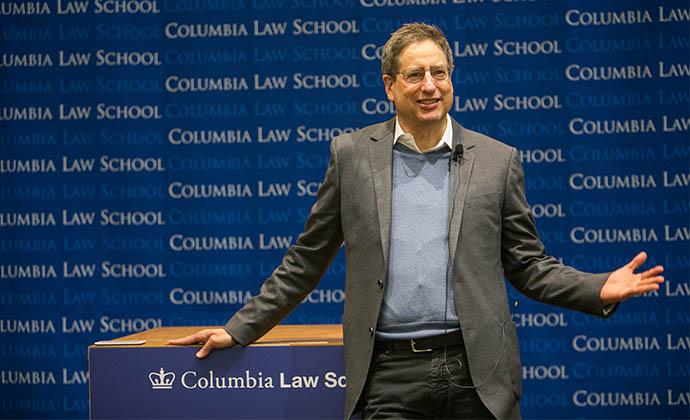 Tom Rothman ’80 knows how to work a room.  One of the most successful movie executives in Hollywood and the current chairman of the Sony Pictures Entertainment Motion Picture Group, Rothman has spent his career dealing with actors, directors, and investors. He has negotiated with high-powered agents, distributors, and lawyers. He demonstrated his ability to win over an audience when he gave an engaging talk at Columbia Law School on Feb. 2 as part of the Dean’s Distinguished Speaker Series.

In an introduction, Gillian Lester, Dean and Lucy G. Moses Professor of Law, allowed that she was “starstruck” by the actors Rothman has worked with (such as Tom Hanks, Meryl Streep, and Denzel Washington) and the hit films he’s overseen (including Avatar and Titanic). Rothman asked that no one tweet about his talk: He explained he wanted to speak freely and give students an unvarnished look at the challenges of running a motion picture studio.

With impeccable comic timing, he held forth in Room 104 of Jerome Greene Hall, where he recalled taking Legal Methods and even leapt to his old seat to pose for a photograph, dramatically putting his head in his hands. “I’m having a really bad flashback,” he quipped. Rothman told tales about his postgraduate judicial clerkship, aborted plan to become a federal prosecutor, and his pivot from working at New York law firms to becoming an independent film producer (who discovered the directors Spike Lee and Jim Jarmusch) and then relocating to Los Angeles to become a studio executive.

Rothman made the case that his legal training equipped him to handle a primary challenge as studio chief, which, he said, is “managing creativity” and balancing it with financial concerns. “You have to be able to hold contradictions in your mind,” he said. “Creativity—definitionally—is unpredictable. It largely needs to be irrational. It needs to be entirely original, deeply, deeply individualistic. And yet if you run a business based on creativity, which is what my business is based on, you need it to be predictable. You need it to be managed. You need it to be reliable. How?”

Creative and financial concerns are inextricably linked, according to Rothman. “Routinely, I will face significant decisions which are irreconcilable: ‘We must have this for the good of the project, but it’s unaffordable.’ But both things are true. What do you do?” he said. “That’s what makes it really challenging and really fun because if it were easy anybody could do it.”

During a Q&A with students, Rothman offered an example of how he recently dealt with such a situation. His studio was a few weeks away from the first public screening of a film about tycoon John Paul Getty, All the Money in the World, when one of the lead actors, Kevin Spacey, was publicly accused of sexual harassment.  Director Ridley Scott insisted he could find a new actor to play Getty, reshooting all the relevant scenes, and re-editing the film to meet the Christmas release date. Rothman pushed back. Telling Scott: “You can’t do it, and I can’t let you do it.” But as they argued, Scott refuted Rothman’s objections, point by point.  “Wonderfully, I lost that argument, but I let myself lose it because that’s an example of what I mean about managing creativity,” said Rothman.

Christopher Plummer, who replaced Spacey, was nominated for an Academy Award for his performance. At 88, Plummer is the oldest actor to be nominated for an Oscar; Scott himself turned 80 during the reshoot, a fact Rothman finds inspiring.  “There are a lot of ‘isms’ in Hollywood, and we have racism, and we have sexism, but we are really, profoundly ageist in Hollywood, and this just flies in the face of the whole thing.”

Earlier in the day, Rothman discussed racism and sexism in Hollywood when he met privately with members of the Entertainment, Arts, and Sports Law Society, a student group holding a symposium, “Legal Issues Surrounding Social Activism in Entertainment, Arts and Sports Law,” on March 3. He spoke about how the movie business was gaining gender parity in the executive suite with more women having the power to greenlight a movie, but he said while there are great strides in the right direction, the entertainment business hasn’t made enough progress across the board especially when it comes to racial diversity.

His advice for Columbia Law students interested in careers in the entertainment industry was succinct. “You don’t get anywhere in life without mentors,” he said. “Pick who you are going to work for. That’s as important as where you go to work. Get close to great people who are interested in you and want to see you do well.”

Rothman said his mentors included the legendary Columbia Law Professor John M. Kernochan; former chair of the U.S. Securities and Exchange Commission Mary Jo White ’74 whom he worked for the summer after his 2L year; Harriet Pilpel ’36 (the first woman to receive the Law School’s Medal for Excellence); and entertainment lawyer Arthur Klein.

Rothman also maintains his Columbia ties. Last fall, he hosted an alumni lunch and talk at Sony Pictures Entertainment with Morton L. Janklow Professor of Literary and Artistic Property Law  Professor Jane C. Ginsburg. Ginsburg, who is also the faculty director of the Kernochan Center for Law, Media, and the Arts, was even greeted with a marquee at the studio that read: “SPE Welcomes Professor Ginsburg & Columbia Law Alumni.”

“I’m really lucky and proud of my Columbia education,” said Rothman. “My legal training is foundational for me.”