WITH CHIEF JUSTICE ROBERTS PRESIDING,
CHRISTOPHER HOGAN ’08 WINS FOR BEST ORAL ADVOCACY AT
STONE MOOT COURT FINALS
By TODD STONE
Over 400 Columbia Law School students packed the main auditorium of Jerome Greene Hall to watch the final arguments in this year’s Harlan Fiske Stone Moot Court Competition. Four Columbia Law School students, narrowed down from 55 starting in the fall, argued before a panel of four highly distinguished judges, including Chief Justice of the United States John G. Roberts, Jr.
After the hearing, the judges left the auditorium, not to make a decision on the case, but to decide on a winner of the Lawrence Greenbaum Prize for Best Oral Advocacy. Upon returning, they announced Christopher Hogan ’08 the winner, and spoke highly of the other student advocates generally. 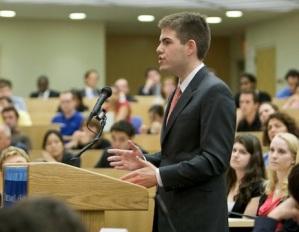 Christopher Hogan '08 won for best oral advocacy in the finals of the Harlan Fiske Stone Moot Court Competition. (Photo credits: Jon Roemer)
The students argued Nafziger v. Kaergard, a mock Seventh Circuit (Illinois) appellate court case, written by Allison Wright ’08, which involved three low-income women who claimed they had been denied quality healthcare as a result of a regulation issued by the Illinois Department of Healthcare and Family Services (DHFS). The judges were complimentary of the complexity of the case that Wright had drawn up.
Hogan and Jordan Connors ’08 represented the plaintiffs, the three low-income women, and Mollie Kornreich ’09 and David Scherr ’09 represented the director of DHFS.
Kornreich went first, and no sooner had she started her prepared opening than Chief Justice Roberts interrupted her with a question. Unflustered, Kornreich quickly - but respectfully - began her answer to counter the Justice’s query with a “No, your honor.” 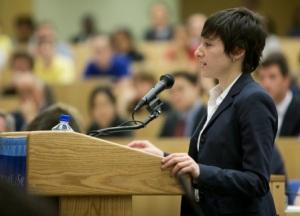 Finalist Mollie Kornreich '09 filled the role of counsel for the appellant in the final arguments.
For nearly an hour and a half, the bench peppered the students relentlessly, often giving them only seven or eight seconds to answer one question before they sent the next question zinging forth - just as the justices of the Supreme Court routinely interrupt lawyers that come before them during oral arguments.
After the arguments concluded, Roberts praised the four students for holding up under the intense flurry of pointed judicial queries. “I thought it was a great competition and that all four of you did quite well with very difficult material,” he said.
Roberts said that as a lawyer, he often wondered whether oral arguments really played much of a role in the decision-making process of the Supreme Court. Now, from personal experience, he knows it matters very much. “When we’re in conference we talk a great deal about the points brought out in the argument,” he said. 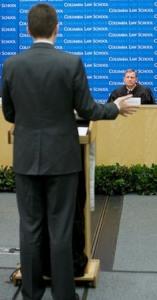 Finalist David Scherr '09
makes a point to Chief
Justice Roberts.
Judge Wood said she liked the way the students answered their questions with a clear yes or no and then followed up with an explanation. If lawyers respond with vague answers or explanations before stating clearly yes or no, “the judge will assume they don’t have a good answer,” she said.
Judge McConnell said all four student participants “should be very proud. Their answers were spectacular. They didn’t flinch. There’s only one winner tonight, but the other three students are winners, too.”
The audience of students and faculty remained focused throughout the hearing, which included not only challenging questions from the judges but also comments from them that generated laughter from the crowd.
“I was looking in the judges’ eyes,” said Shira Kaufman ’10, who was seated front and center, “and you don’t know where they stand [on the issue]. They asked pointed questions, yet they were pleasant and very human.” 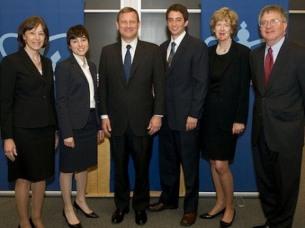 The Judges' panel with finalists Mollie Kornreich '09 (second from left) and David A. Scherr '09 (fourth from left). 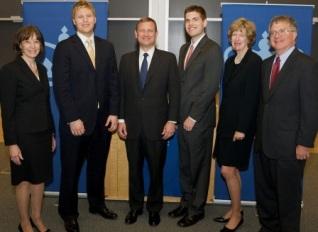 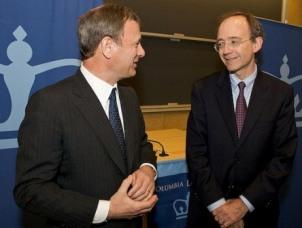 Chief Justice Roberts chats with Professor Philip Genty after the competition. Genty is director of the moot court competition.