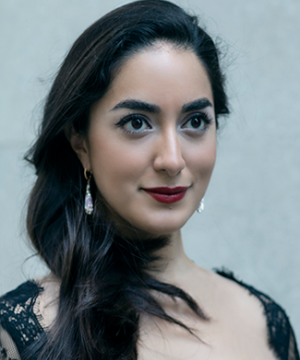 Almost every New Yorker knows how to get to Carnegie Hall—practice. But few, if any, would expect the classic punch line to mean legal practice, the exact route taken by Marie-Joe Abi-Nassif ’15 LL.M., a mergers and acquisitions lawyer who made her debut at the famous concert venue this past December.

“It was like a dream,” says the mezzo-soprano, who sang opera selections from the 19th and 20th centuries in Weill Recital Hall, to a full house of family, friends, co-workers, and fans. “It was thrilling, moving, but went by so fast. I enjoyed every single note of this performance and felt truly inspired while I was on stage.”

An associate at Latham & Watkins by day, Abi-Nassif has always pursued two paths—sometimes diverging and at other times overlapping. Born and raised in Lebanon, it was difficult for her, as a budding vocalist, to be taken seriously in a society that didn’t consider music a legitimate pathway to success. Instead, she recalls, children were encouraged to take on more appropriate vocations, like the law or medicine.

“In a country that has been torn by so many wars, the idea of being an artist isn’t viewed as a profession,” she explains. “You have to be ‘serious’ to prove you’ve made it.”

Abi-Nassif chose the law, but found one passion could enhance the other. After receiving an LL.B. from Saint-Joseph University in Beirut, she moved to Paris to pursue a master’s degree in business law at Panthéon-Assas University (Paris II). It was in Paris that Abi-Nassif saw her first opera, Le Nozze Di Figaro, at the age of 21. She also began studying vocal technique with soprano Mihaela Mingheras and training with Maestro Denis Dubois of Opéra National de Paris (who she still works with).

“I received the proper encouragement,” Abi-Nassif explains. “The level of the professional people I was studying with—I could really trust them with my voice. That’s when my singing seriously started, from a career perspective.”

Determined to pursue both music and the law professionally, Abi-Nassif moved to New York City in 2012 and began working as a paralegal at Latham & Watkins. Living in New York brought her the opportunity to study at the Juilliard School as part of the legendary institution’s evening division. It also allowed her the chance to earn an LL.M. degree at Columbia Law School, where, for the first time, she met classmates following their own equally eclectic paths.

“I was extremely fascinated by my friends at the Law School—how smart, friendly, and down to earth they were,” Abi-Nassif says. “They are very well-rounded people in other disciplines. It was the best year of my life.”

Upon graduating from the Law School in 2015, Abi-Nassif came under the tutelage of celebrated soprano Virginia Zeani, who convinced her she had the power and tempo to become an opera singer. She also returned to Latham, a place that has given her the ability to balance both legal and musical goals. Her apartment, for example, shares a wall with the law firm’s Midtown office, making it close enough to run home for a quick vocal lesson in the evening. To ensure she’s never slacking, Abi-Nassif relies heavily on her WiFi hotspot to facilitate work from cabs, on trains, and at home. She frequently travels to West Palm Beach, Florida, for vocal training with Zeani, and when in-person instruction is impossible, Abi-Nassif’s lessons are conducted over Skype.

“It takes a lot of mental control to shift gears every day,” she says. However, Abi-Nassif finds her relationship with music informs her legal work. “I think my singing career gives me the ability to think outside the box as a lawyer,” she adds. “It also gives me the emotional intelligence to understand other people and adjust accordingly.”

In floating between these two worlds so effectively, Abi-Nassif makes sure she never looks more than one year into the future. Instead, she focuses on the progress she makes each day, whether it’s working with clients on a particularly difficult deal or perfecting her program for Carnegie Hall. The keys to each, she says, are the milestones along the journey.

“You have to give yourself a goal, even if you’re throwing yourself in the water and can barely breathe,” Abi-Nassif adds. “If you can breathe, you can do it.”

You can read more about Abi-Nassif's singing and legal careers via The American Lawyer and Above the Law.