High School Students Get a Live History Lesson, Courtesy of Professor Jack Greenberg
Media Contact:
Public Affairs Office, 212-854-2650 [email protected]
New York, July 26, 2010--When students from the Thurgood Marshall Summer Law Internship Program recently visited Columbia Law School, they learned more about the legendary Supreme Court justice than they could have imagined.
The students, high-achieving juniors and seniors from New York City, were at the Law School for a class taught by Carol Sanger, the Barbara Aronstein Black Professor of Law, who has taught a class to the interns over the last eight years.
The focus of Sanger’s class was on child abuse. But Sanger also invited Jack Greenberg ’48, the Alphonse Fletcher Jr. Professor of Law, to speak to the students and give them what amounted to a living history lesson. 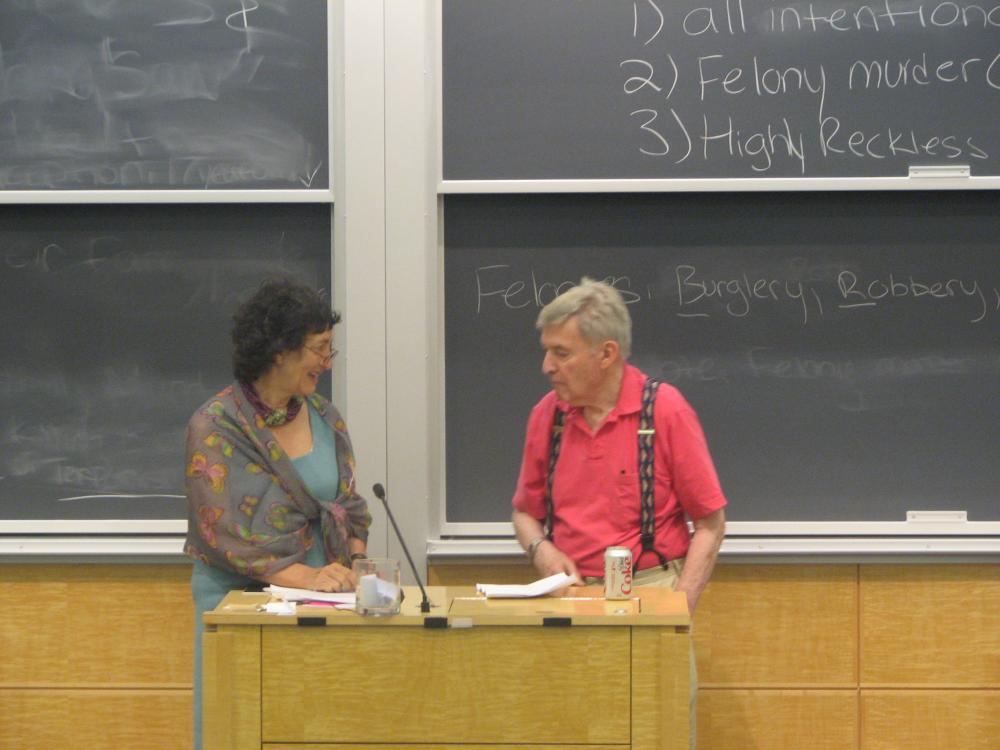 Greenberg (right, with Sanger)  succeeded Marshall as Director-Counsel of the NAACP Legal Defense Fund in 1961. They had worked together 12 years on many seminal civil rights cases, including Brown v. the Board of Education, which they argued in front of the U.S. Supreme Court.
“They got to hear about Justice Marshall from a more personal point of view,” Sanger said. “The students were elated and asked extraordinarily difficult questions of Professor Greenberg.”
The aim of the program, run since 1993 by the New York City Bar, is to increase diversity in the legal profession. Students must be either minority or immigrants or come from a disadvantaged population. After a rigorous selection process, students are placed in paid positions at law firms, law schools, government agencies, and judge’s chambers assisting paralegals, librarians and back-office personnel with filing, data entry, record-keeping and other tasks.
Students participate in a weekly development program. That includes Sanger’s class, trips to courts and career workshops with lawyers. Students are also given help with college applications, professional etiquette, resume writing and networking.
Sanger said the class is “always a great experience for me. It’s a way for the law school to reach out and participate in the community in a tangible way. I tell these students that I expect to see them back here sitting in these same seats as law students sometime in the next several years.”
Columbia Law School, founded in 1858, stands at the forefront of legal education and of the law in a global society. Columbia Law School joins its traditional strengths in international and comparative law, constitutional law, administrative law, business law and human rights law with pioneering work in the areas of intellectual property, digital technology, sexuality and gender, criminal, national security, and environmental law.
Visit us at http://law.columbia.edu
Follow us on Twitter http://www.twitter.com/columbialaw