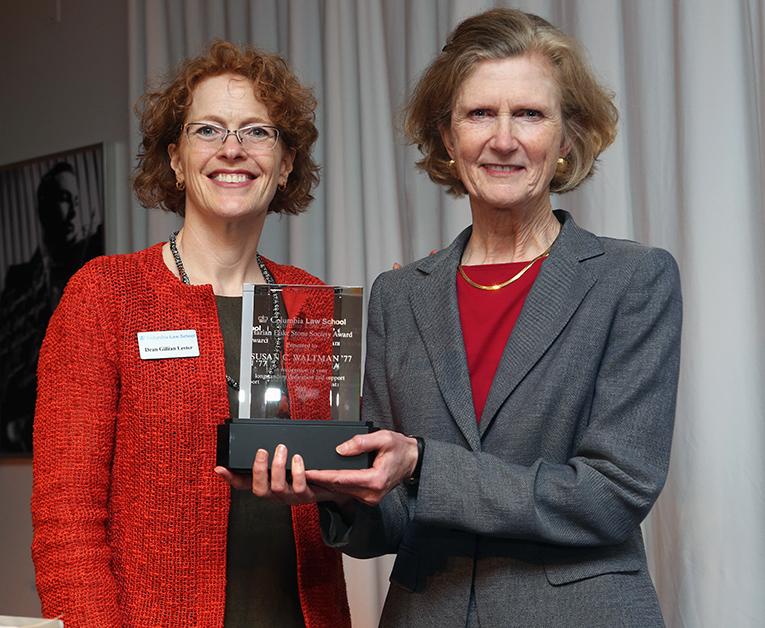 “A good friend and counselor. . . . One of the Law School’s—and the university’s—most ardent advocates.” That’s how Gillian Lester, Dean and the Lucy G. Moses Professor of Law, described Susan Waltman ’77, who was honored on May 7 at the annual Harlan Fiske Stone Society reception. More than 100 alumni members of the Harlan Fiske Stone Society, joined by family and friends, gathered at Carnegie Hall to recognize Waltman’s contributions as an alumni volunteer.

“The Harlan Fiske Stone Society Award is given to an individual who has demonstrated what it means to be a loyal supporter of the Law School: leadership in annual giving, volunteerism, civic engagement, and contributions to and achievements within the legal profession,” explained Dean Lester in her introduction of Waltman. “I can think of few others who embody the qualities that the Harlan Fiske Stone Society Award recognizes with as much grace and conviction.”

During her own time at Columbia Law School, Waltman was a Harlan Fiske Stone Scholar. Following graduation, she began a career in health care law, first as an associate at Drinker, Biddle and Reath in Philadelphia, next as the general counsel for the Medical College of Pennsylvania, and then as executive vice president for the Greater New York Hospital Association. She has also taught health care law at NYU Law and Brooklyn Law School. She served as a member of the Law School’s Board of Visitors from 2009–2015 and is currently a Dean’s Council member. She has served as co-chair of the Harlan Fiske Stone Council and leader of countless class reunions. In 2011, she established a scholarship in memory of her father for meritorious students in financial need.

Calling it her duty and privilege to give back to the Law School, Waltman said that “the greatest honor of all is having the opportunity to serve Columbia Law School and the ability to meet and work with all of you.”