The legal issues argued during the 2009 Harlan Fiske Stone Moot Court competition were as complex as any that come before the federal bench – touching upon religious freedom, environmental protection, Native American tribal rights, and property rights. 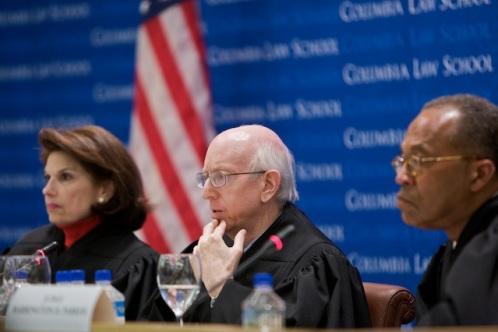 About 200 students watched the arguments on March 24 in the main auditorium of Jerome Greene Hall as the four finalists made their cases before Judges Reena Raggi (above, left) and Barrington D. Parker (right), both of the U.S. Court of Appeals for the Second Circuit, and Judge Richard A. Posner (center), U.S. Court of Appeals for the Seventh Circuit.

The Uncas Tribe, which uses the river for “religious and ceremonial” purposes, argued that it needed more stringent water quality standards than those already set by the Clean Water Act. The EPA agreed and terminated Carstone’s water discharge permit.

But did the EPA violate the Establishment Clause of the First Amendment of the U.S. Constitution by enforcing the tribe’s water quality standards? And when the EPA terminated Carstone’s permit because it did not meet those standards, did the agency effect a taking without just compensation, contrary to the Fifth Amendment? 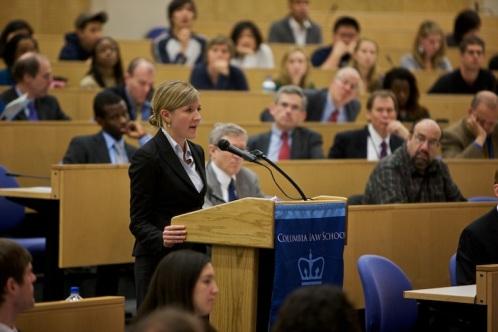 At the start of the competition, the audience rose and a hush fell over the crowd as the robed judges filed into the auditorium. After almost two hours of arguments the judges named Howard (above) the best orator of the day. She later described her reaction as “stunned, surprised.”

“I definitely did not see it coming,” Howard said. The most difficult thing about preparing for the competition was trying to anticipate judges’ questions, she said.

"They ask you things that are very minor points in the record or in your brief, and it’s very difficult to know in advance the level of what you have to prepare for,” Howard said.

About 50 students competed in the moot court competition this year, writing briefs and making legal arguments on the case. That pool was winnowed down to 16 during preliminary rounds before benches of alumni volunteers and then, after another round of briefs and arguments, the final four were selected.

During the competition, the judges’ questions came so fast and furiously that participants rarely were able to speak for more than a minute before a judge interrupted with another question.

In her oral argument, Howard cited the real-life case Lemon v. Kurtzman, part of which says an action violates the Establishment Clause if the primary effect is to further religion.

"The only indication given by the EPA in the record is their letter revoking Mr. Carstone’s permit … to protect the Uncas religious rights,” said Howard, who was representing Carstone on the establishment issue.

Cristol argued that the EPA did not violate the Establishment Clause, at one point countering that “the principal effect of increasing the water quality is that the Snake River is now cleaner.”

On the taking issue, Hudson represented the EPA, while Guarnieri argued for Carstone.

After the competition was over, Parker admitted, “We gave you a hard time, but that’s our job.”

Posner had high praise for the participants.  "We want to thank the contestants for really excellent arguments – they were certainly very high professional quality.”

He also lauded the work done by McGill in creating the case. A problem designed by a student – as opposed to a professor – is a hallmark of the Harlan Fiske Stone competition.

McGill said he wanted something “exotic,” and “something that would draw people in and give them a lot to deal with.”

He said he became fascinated with the balancing that goes on between religious freedom and property rights and combined that with an interest in federal courts and the legal rights of Native American tribes.

"Federal Courts is one of the most difficult classes in law school because you’re dealing with relations between states and the federal government. It’s all on principle; there really is no doctrine. Here you have not only the federal government and the state, but you have Indian tribes, which are quasi-states."

In looking at his future as a lawyer, McGill said he believed the experience, especially writing the 90-page bench memo, would help him in his career.

"I think it really helped me with my legal thinking. It gave me confidence to do it when I’m practicing,” McGill said.

“The Stone Moot Court is a rigorous experience that gives students excellent preparation in brief-craft and oral advocacy,” said Philip Genty, director of the Law School’s moot court program. “Whether they pursue litigation or another career path, the skills they gain in legal writing and arguing before a bench will serve them well. We’re all so proud of Abbey, Lauren, Matthew, Melanie, and Patrick for their wonderful work on this.” 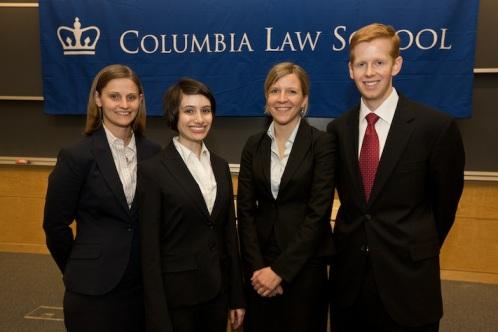 Hudson called the competition “the highlight of my law school experience.” She said the experience was particularly profound because she hopes to work in environmental compliance law. She didn’t mind the judges’ tough questions, noting that “if they had just sat there and let us go on it would not have been nearly as interesting.”

Cristol said she prepared for the judges’ review by asking friends to pepper her with their own questions. She said her nerves evaporated the day of the event, replaced by excitement.

"It was a great experience, the entire six months,” she said. “From the beginning to the final arguments, it was such a huge learning process.”

Although Howard was named the best orator of the day, Raggi had something to say at the very end to all the participants.
"My congratulations go to Miss Howard, but my heart is with the rest of you,” she said. “Many years ago in a moot court competition at an average law school in Cambridge, I was on the losing side of an event and I was convinced my life was over.”As the audience laughed, Raggi continued,

“As you can see there is life after moot court, even on the federal bench.”
###

Columbia Law School, founded in 1858, stands at the forefront of legal education and of the law in a global society. Columbia Law School joins traditional strengths in international and comparative law, constitutional law, administrative law, business law and human rights law with pioneering work in the areas of intellectual property, digital technology, sexuality and gender, criminal and environmental law.