Harlan Fiske Stone Moot Court Finals
Supreme Court Associate Justice Alito Hears Final Arguments In Duarte v. Los Alamos County Library for the Harlan Fiske Stone Moot Court Competition
CLICK HERE FOR A VIDEO OF THE EVENT (RealPlayer Required)
NEW YORK (April 11, 2007) -- Four meticulously prepared students tackled thorny issues surrounding immigration status and Title VII of the Civil Rights Act, as well as questions about Title II claims under the Americans with Disabilities Act (ADA), at Columbia Law School’s 2007 Harlan Fiske Stone Moot Court Competition. The arguments took place before a simulated 10th Circuit Court of Appeals which included Hon. Justice Samuel A. Alito, Jr., of the U.S. Supreme Court; Hon. Susan P. Graber of the U.S. Court of Appeals for the 9th Circuit; Hon. Brett. M. Kavanaugh of the U.S. Court of Appeals for the District of Columbia; and Hon. Sonia Sotomayor of the U.S. Court of Appeals for the 2nd Circuit.
"The quality of arguments was outstanding," said Justice Alito. "I only wish that all the arguments I’ve heard on the court of appeals and that I hear now were of this caliber."
The case centered around a New Mexico librarian who claimed she was subjected to crude comments and lower pay after she underwent a mastectomy to treat breast cancer. Another supervisor allegedly shuttled her to less satisfying work in the library basement, calling her appearance unfit for work at the front desk.
The case, Isabella Duarte v. Los Alamos County Library, posed important questions about whether the library had the right to force the librarian to reveal her immigration status in order to pursue a Title VII claim. In addition, student participants also wrestled with the issue of whether the librarian was permitted to bring an ADA claim under Title II, even though she missed the deadline to file a charge with the Equal Employment Opportunity Commission.
After two hours of arguments before a packed auditorium in Jerome Greene Hall, Eric Chesin ’08, who argued for Ms. Duarte in the Title VII portion, was given top honors for best oral advocacy.
It was daunting to stand before judges firing a continual barrage of difficult questions, Mr. Chesin said, adding: "There were moments when I was thinking, ‘What did I get myself into?’, but to be questioned one on one by judges who have accomplished so much is very exciting."
Justice Alito returned the compliment to Mr. Chesin and the other participants, David Gringer ’08, who argued for the Los Alamos Library in the Title VII claim, Patrick Somers ’07 who represented the library in the Title II claim, and Geoffrey Reed ’08, who handled the Title II issue as counsel for Ms. Duarte.
The judges also praised the quality of the case, which was prepared Kirsten Lindee ’07.
"It’s extremely difficult to craft a legal problem with the appropriate depth and balance, and at the same time to create a factually engaging scenario. Kirsten was able to achieve this," said Professor Philip Genty, who provided guidance to the Moot Court Executive Committee. 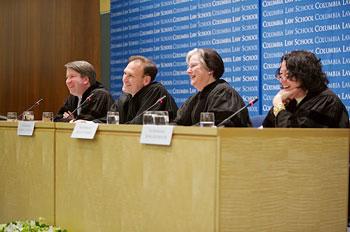 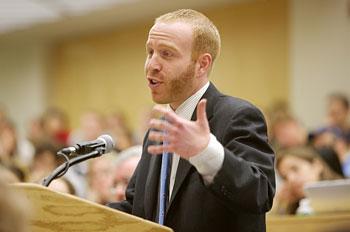 David Gringer '08 argues the Title VII case for the petitioner. 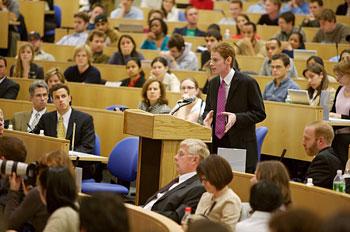 Eric Chesin '08, winner of the prizes for best oralist and highest overall
score from the qualifying and elimination rounds, argues the Title VII
case for the respondent. 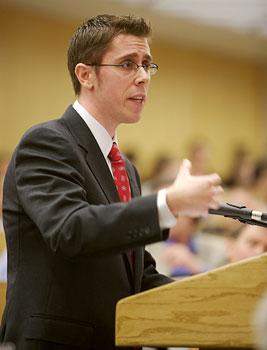 Geoffrey Reed '08 argues the Title II portion of the case
for the respondent.