The leading scholar and practitioner in the fields of international arbitration and international procedure passed away on January 7, 2012, at the age of 84.

New York, Jan. 8, 2012—Hans Smit ’58 LL.B. was a distinguished Columbia Law School professor and a leading scholar and practitioner in the fields of international arbitration and international procedure. He passed away on January 7, 2012, at the age of 84.

Smit was born on August 13, 1927, in Amsterdam, Netherlands. He told colleagues that his mother wanted him to become a doctor but that he eschewed the University of Amsterdam’s faculty of medicine in favor of the law faculty in part because law classes started later in the day.

After earning his LL.B. and LL.M. from the University of Amsterdam in 1946 and 1949, respectively, Smit went back and forth between private practice in The Hague and New York City, and he received a Fulbright scholarship in 1953. He earned a master’s degree at Columbia in that same year and graduated first in his class with an LL.B. from Columbia Law School in 1958. After graduation, Smit worked for two years at Sullivan & Cromwell in New York City. It was Smit’s wife, Beverly, who persuaded him to try his hand at being a law professor, he said. 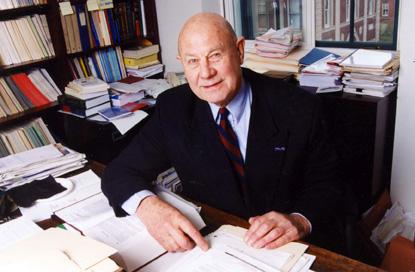 Smit joined the Columbia Law School faculty in 1960, assuming directorship of the Project on International Procedure, which attracted top legal minds, including U.S. Supreme Court Associate Justice Ruth Bader Ginsburg ’59, who served as a research associate and associate director. Under Smit’s leadership, the program prepared a revised version of Section 1782 of Title 28 of the United States Code, which Congress enacted in 1964. Smit’s team drafted the revision together with the U.S. Commission and Advisory Committee on International Rules of Judicial Procedure, for which Smit served as a reporter for a decade.

The impact of the 1964 revision was seismic, Smit noted in a 1998 law journal article. “[It] greatly liberalized assistance given to foreign and international litigants and tribunals and, in the thirty-five years that followed its enactment, has been applied in scores of cases,” he wrote in the Syracuse Journal of International Law and Commerce.

In 1963, Smit founded the Columbia-Leiden-Amsterdam Summer Program, which gives law students and practicing lawyers from around the world the opportunity to travel to the Netherlands for one month of intensive training in American law. Smit recalled in 2008 that the idea for the program, which continues to this day, emerged from his experience teaching in U.S. and Dutch classrooms.

“The American focus on fact-specific situations, and the challenge to probe the questions and provide appropriate answers was totally different from the memorization I experienced in my European studies,” Smit said. “So when I was appointed to the Columbia Law faculty, I said, ‘We should really expose the Europeans to American lawyering.’”

Smit, who led the program until 1988, said it became a powerful recruiting tool for Columbia Law School. “It . . . gave us a real advantage,” Smit said in 2008. “As far as Europeans were concerned, we were the international law school. We became the natural attraction point for people who wanted to study in the United States.”

Smit was also a driving force behind the creation of the J.D./Master in French Law Program, offered jointly by Columbia Law School and the University of Paris 1 - Panthéon-Sorbonne. Those who complete the four-year program receive law degrees from both schools and qualify for admission to bar examinations and the bar in both France and the United States.

In 1965, Smit further helped burnish the Law School’s reputation as a global hub for the study of international law as director of the Project on European Legal Institutions, which was organized with a grant from the Ford Foundation. The project yielded a comprehensive work, The Law of the European Economic Community, which Smit co-edited with Peter E. Herzog. The book was the first multi-volume, article-by-article treatise on the subject in the English language, and it was subsequently reprinted under the title The Law of the European Union.

A reporter to the U.S. Commission on International Rules of Judicial Procedure from 1960 to 1969, Smit served as an adviser to the U.S. delegation to the United Nations Commission on International Trade Law and as a consultant to the Judicial Conference of the State of New York. In 1978 he was appointed to the Stanley H. Fuld Chair at Columbia Law School.

Smit had a reputation as an exacting teacher who inspired both anxiety and adoration in his students, many of whom say their appreciation of his tutelage only increased after graduation.

“I did not at that time appreciate what Professor Smit referred to as the ‘beauty’ of the Federal Rules of Civil Procedure, a copy of which he urged us to keep under our pillows at night,” Nicole A. Gordon ’77 said in a speech after accepting the 1999 Wien Prize for Social Responsibility. “[But as a practicing litigator], I saw how Professor Smit was absolutely correct about the central importance of this subject. On the surface, it was simply about lawyers’ ‘rules of the game,’ and not about substantive results. But at a deeper level, the rules of the game do in fact affect the results.”

Smit published numerous books and articles on civil procedure and international arbitration, litigation, and business transactions. He also wrote influential amicus briefs for U.S. Supreme Court cases, including Orr v. Orr, in which the Court struck down as unconstitutional an Alabama statute that barred men from receiving alimony payments.

Smit was a member of the Royal Netherlands Academy of Arts and Sciences and the International Academy of Comparative Law. In 1987 he was made a Knight of the Order of the Netherlands Lion by Queen Beatrix.

Outside of the legal world, Smit was keenly interested in the Middle Ages and collected 14th- and 15th-century art and furniture. He was also an accomplished water polo player. He said he missed an Olympic spot with the Dutch national water polo team only because of a dispute with the coach, who suspended him for gambling instead of resting in the hotel during the 1947 European Championship in Monte Carlo. “In the middle of the day—it was absolutely ludicrous!” Smit told the New York Daily News in the early 1980s. “I told him I would get all nervous and sweaty trying to rest. Gambling was far more relaxing.”

With his powerful 6-foot-4-inch frame and refined throwing technique, Smit was relentless on offense, and he was considered among the world’s top water polo players in his prime. “Water polo balances my life,” he told the Daily News.

Smit is survived by his wife, Beverly, and his children, Robert H. Smit ’86 and Marion Smit.