The law and economics scholar says that asking the right questions produces the most illuminating answers. 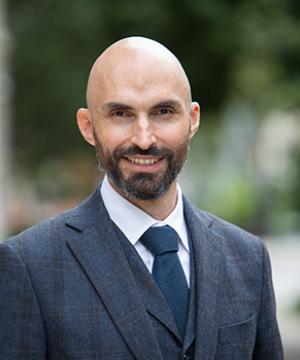 His field is law and economics, but Giuseppe Dari-Mattiacci LL.M. ’17, J.S.D. ’18 says his guiding principle in academia comes from a line in his old chemistry textbook: “Research doesn’t consist of great answers; it consists of great questions.”

Perhaps that early influence explains why the description for Dari-Mattiacci’s course on contracts—which he first taught as a visiting professor in 2018—begins with the question “Why do we need to commit to ‘keep our word’?”

“You would be surprised how many things follow on from very simple questions,” he says.

Luckily, Dari-Mattiacci, who joined the Law School faculty in July as the Alfred W. Bressler Professor of Law, has plenty of questions. His work focuses on the evolution of legal institutions and business organizations, contract theory, and the economic analysis of regulation and dispute resolution mechanisms. In addition to Contracts, Dari-Mattiacci plans to teach a course on the history and theory of business organizations with the goal to “connect the economic theory of the firm to the legal theory of business organizations,” he says. “There are connections, but the two approaches do not overlap. Students tend to overlook the differences.”

As a self-described curious child, Dari-Mattiacci always planned to pursue academic research. Medicine, his initial choice, felt too focused on the practical. He fled to law and then statistics, mathematics, and economics. In all his studies, he sought “a way to get back to the path of being able to ask substantive questions [about] why things are the way they are.” Before earning his LL.M. and J.S.D. from Columbia Law School, Dari-Mattiacci received a bachelor’s in mathematics from the University of Amsterdam, a J.D. from the University of Rome, and a master’s and Ph.D. in law and economics from Utrecht University.

Now, Dari-Mattiacci’s work combines theoretical and empirical research with a historian’s perspective. The result is his analysis of “centuries of data.” He has studied, for instance, the economics of slavery in ancient Rome and is the co-editor of a two-volume work on the economics of Roman law (to be published by Oxford University Press). He is also a co-author of a prize-winning article about the development of the Dutch and English East India trading companies, which he says “shows that their different capital structures had a profound influence both on their relative success in the 17th and 18th centuries and their role in the emergence of the corporate form for centuries to come.”

In addition to his historical work, Dari-Mattiacci has applied economic theory to the study of “carrots and sticks,” two of the most common incentive schemes, examining their relative advantages and disadvantages in regulations, employment relationships, contracts and, most recently, gym memberships.

The Law School, Dari-Mattiacci says, offers him the chance to pursue his cross-disciplinary ideas: “The great thing about Columbia is that I can creatively combine the many interests that I have.”

Dari-Mattiacci has already collaborated with his fellow faculty members: He’s co-written a paper on merger objection lawsuits and the effects of the recent Trulia decision with Professor Eric Talley as well as one on “selective incentives” with Professor Alex Raskolnikov. (Selective incentives are regulatory schemes that have an effect both on whether individuals participate in the regulated activity and whether they comply with the regulation.) He foresees more collaborations with colleagues now that he has officially joined the Law School faculty. “Every time we talk, it generates a new idea,” he says.

Outside of academia, Dari-Mattiacci’s avocations include cycling, hiking, and photography. Although he’s now settling into New York City life, he remains utterly enthusiastic about his hometown, Cori, 40 miles southeast of Rome. “The most beautiful small town in Italy,” he says. “A full-size temple, castles, mountains, great wine from local grapes, great olive oil. . . . Put it on your to-visit list.”