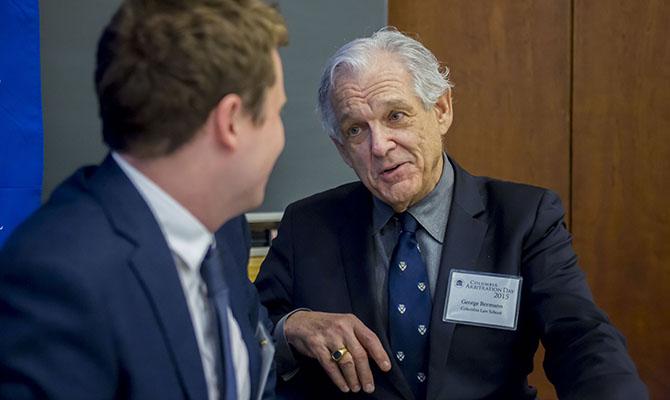 George A. Bermann, Columbia Law School’s Jean Monnet Professor of European Union Law, Walter Gellhorn Professor of Law, and director of the Center for International Commercial and Investment Arbitration and the Center for European Legal Studies, received a lifetime achievement award on October 28 at the annual meeting of the American Society of Comparative Law (ASCL). The prestigious award honors legal scholars whose writings have changed the shape or direction of American comparative law and private international law.

Bermann, a world-renowned expert in international and comparative law, as well as EU law and the law of international arbitration, was feted at an award ceremony held at the University of Washington School of Law in Seattle.

“George Bermann is a remarkable scholar who has dedicated his distinguished career to the study of the world's legal systems, and to teaching students the intricacies of international and comparative law,” said Gillian Lester, Columbia Law School Dean and the Lucy G. Moses Professor of Law. “He is a superb choice for the American Society of Comparative Law's Lifetime Achievement Award, and we couldn’t be prouder of the recognition.”

In addition to being honored by his peers, Bermann served as a panelist during the three-day conference, exploring the teaching of comparative law outside of Europe and the U.S., and most notably in Asia, examining the ways in which the comparative law research agenda can best reflect the contemporary world.

Bermann is an affiliated faculty member of the School of Law of Sciences Po in Paris, and the MIDS Master Program in International Dispute Settlement in Geneva. His writing has been cited by foreign courts, as well as domestic state and federal courts, including the U.S. Supreme Court in United States v. Morrison.

Bermann joined the Law School faculty in 1975, after receiving a J.D. from Yale Law School and an LL.M. from Columbia Law School, and practicing law at the firm of Davis Polk & Wardwell in New York.