Future Lawyers Start by Giving Back

“It’s a wonderful opportunity for new students to experience the neighborhood, contribute to the community and bond with each other in a relaxed and productive way,” said Ilene Strauss, Executive Director of Judicial Programming & Academic Counseling at the Law School, who initiated the program and with the Department of Student Services coordinated the logistics.

Teams of students tackled three projects: Preparing lunch for visitors to the soup kitchen at Broadway Presbyterian Church on 114th Street, and weeding and pruning in Morningside Park near the 116th Street entrance and at the St. Clair Rose Garden in Riverside Park at 125th Street.

One group spent the morning at the soup kitchen setting up tables and preparing food for about 65 guests. The 15-person team worked with the volunteer groups Community Impact and Broadway Community Inc. to host the restaurant-style lunch for homeless and low-income people.

“We’ve been cutting vegetables, shucking corn and quartering kielbasa,” said Jackie Kelly ’11 (below, second from right). The menu that day featured pasta with tomato sauce and kielbasa, farm-fresh kale and corn on the cob – the program partners with a Community-Supported Agriculture farm – salad and, for dessert, canned peaches.

Students, in plastic aprons and rubber gloves, got to know one another as they worked.

“I thought this would be a nice way to meet people and to do something to help,” said Julia Hoffman ’11 (above, far right), who had arrived in Morningside Heights the day before.

Two crosstown blocks over at Morningside Park, about 60 students were busy clearing weeds and sawing branches of overgrown saplings along a main path.

“Our apartment borders the park,” said James Kong ’11, who lives on 121st Street off of Morningside Drive. “I thought this would be a good way to get to know the area.” 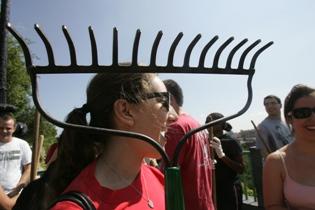 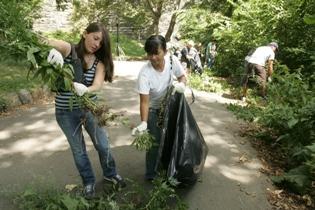 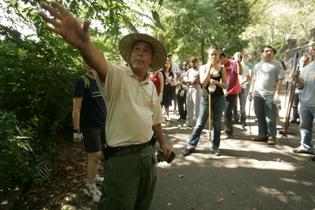 "This area looks like a jungle," said gardener Joe Spano. "We want to open the area up so you can see through," he said, pointing to the trees ahead and fields below.

Joe Spano (above), a gardener for Friends of Morningside Park who supervised the project, was not surprised to find the group very eager and hard-working: “They must be if they’re at Columbia!” 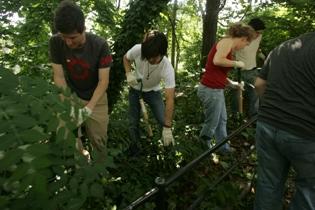 Half a mile north, another team of students and Strauss spent the morning working in the St. Clair Rose Garden. Also known as the “Commissioner’s Garden” after New York City Parks Department Commissioner Adrian Benepe, it is located at 125th Street and 12th Avenue under a viaduct.

“This morning the weeds were this high!” said Kimberly Green, the Volunteer Program Assistant for the Riverside Park Fund, pointing to her forehead. “Now you can see shrubs. They’ve been weeding for three hours, and it’s just beautiful.” 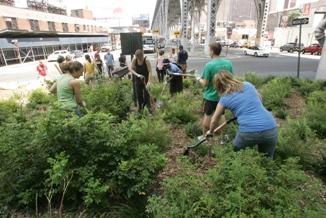 “We got to do a bunch of different projects,” said Kahlil Williams ’11 (above, right), who wore his “Farmers High School” – the original name of Pennsylvania State University, his alma mater – T-shirt for the occasion. He spent the morning weeding, pruning, hauling materials in the wheelbarrow and spreading mulch.

Kate Swearengen ’11 (above, left) said of her first visit to Riverside Park, “I’m not much of a gardener, but it looks like we accomplished a lot.” She hopes to return with a bicycle and ride along the Hudson River. 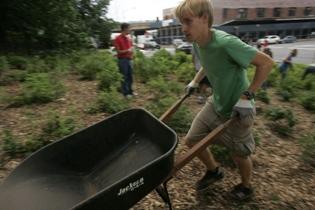 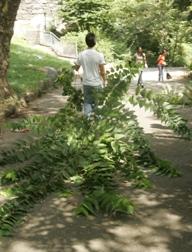 Dean of Students Michelle Greenberg-Kobrin ’99, who spent that morning at the soup kitchen, said, “Community Service Day is a wonderful way for incoming students to meet each other, get to know the city and the neighborhood. But most importantly, it begins their understanding that along with the privileges associated with a law degree there are also responsibilities.”