Is the Future of American Law in India?

November 9, 2007 -- One Friday afternoon six years ago, Russell Smith, ’85, was sitting in his New York office, pondering how he was going to get nine subpoenas out by Monday morning. The other lawyers of Smith Dornan Dehn, a small firm that concentrates on film, television and other media, were either busy or did not want to work that weekend. “I was thinking I’d call one of my starving artist friends, to see if they could help with the paperwork,” Smith said. But then he thought of another acquaintance in India, where he had recently studied yoga. The friend expressed interest, and Smith asked him to name an hourly wage. “He said 40 rupees, about one dollar. He did all nine subpoenas and it cost us $20.”

It was Smith’s first experience with legal process outsourcing (LPO) to India, and it ultimately led him to establish in 2006 a subsidiary of Smith Dornan Dehn in Mysore, a city in the southwestern Indian state of Karnataka. By then, outsourcing to India was well established. The practice began in 1995, when a Dallas-based litigation firm opened an office in Hyderabad, later spinning it off into a separate company, Imaging & Abstract International. Today, there are more than 100 Indian LPO operations, which employ some 7,500 Indian legal professionals and generate about $146 million annually. By 2010, the industry is expected to see annual revenues of $640 million and employ 32,000, according to ValueNotes, an Indian business research firm. 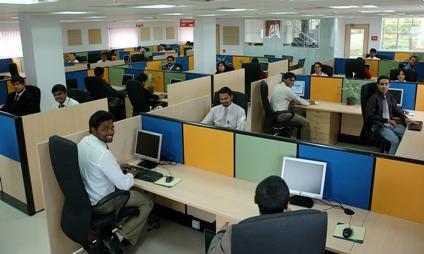 Inside the Mysore, India, offices of SDD Global Solutions.

SDD Global Solutions distinguishes itself in this crowded field in that it is the only LPO operation in India owned and managed by an American law firm. “That gives us credibility, because everything that we do in India is backed up by our firm in New York,” said Smith, who as president and chairman of SDD, works from the Mysore offices.

SDD employs more than 40 Indian lawyers, whose legal training, like that found in the United States, derives from the British common law tradition. Under the supervision of American lawyers in New York, Indian attorneys perform the types of tasks normally handled by American paralegals and associate lawyers — at a fraction of the price. Also, Smith pointed out, office space in Mysore is 43 times cheaper than in Manhattan. These savings are passed onto clients. Instead of billing $200 to $700 per hour in the United States, SDD charges $30 to $90.

“As a consequence we get a lot of work that otherwise would be too expensive, and wouldn’t get done,” Smith said. For instance, Sony Pictures recently approached SDD to do the preliminary legal work for a movie it wanted to make. “The script made for some complex legal issues, and we told them we would put 10 to 20 lawyers on the case,” Smith said. “That would have been the end of the conversation if we were talking about a United States firm. It would have been too expensive, and the studio would have moved on to another script. But with our India staff, we were able to do it for $43,000, compared to $250,000 if it had been done in the United States.”

Many large U.S. law firms — including Kirkland & Ellis, the country’s seventh largest — already outsource some of their legal work. But most do not like to publicize the fact and, in the foreseeable future, are unlikely to set up offices in India. “They can’t credibly bill an Indian lawyer at $365 an hour, and they still need that markup,” Smith said. “But by charging lower fees, we get more volume, which in our case is profitable. We’re looking to expand our India staff from 40 to 200 in the next few months.”

It is up to clients to force firms to lower their rates through outsourcing, Smith said. “There are some fields, such as mergers and acquisitions, which will stay in the United States, but a lot of litigation and contract work can be outsourced.”

Many in the legal profession are concerned about what effect outsourcing will have upon the future of the profession at home. But Smith believes such worries are misplaced. “If legal services become more affordable, that will transform the field,” he said. “Right now, so many financial deals, especially those for less than $1 million, don’t get done because the legal fees for these transactions are so expensive. It’s not worth it. That’s all going to change with the rise of outsourcing.”