May 29, 2008 (NEW YORK) -- Experts in law, development, health and policy convened at Columbia Law School in April for a symposium on global emigration of African peoples and neocolonialism.

The first-ever Critical Connections Symposium, held April 24, was sponsored by the African Law Student Association (ALSA) at Columbia University and the Center for African Education (CAE) at Teachers College.

“For too long, the American legal profession has stayed out of Africa,” said Mojoyin Onijala ’09, ALSA chairperson, in her welcome at the conference. She noted that a conference goal was to create the impetus for Columbia to one day establish an African law institute.

As one of just a handful of law schools nationwide with an organization dedicated to law and Africa – a unique subject distinct from the focus of black American law associations – ALSA thought it would be fitting for Columbia to be the host of the first Africa-focused symposium at a U.S. law school, Onijala later said.

ALSA first established a partnership with CAE in October 2007 and spent the next five months meeting weekly, developing a call for papers, securing speakers and publicizing the event to the Columbia, NGO, business and diplomatic community across the country. 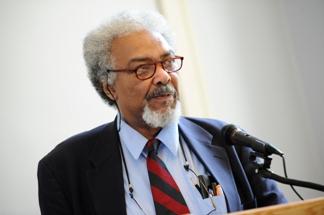 
“The continent of Africa is now reshaping itself,” said Professor George C. Bond, the CAE director, in his opening remarks. He emphasized that the impact of colonialism and the arbitrary borders it left behind has not yet dissipated.

“Economic decline and political upheavals are often expressed as violence, and it is women who suffer the most,” he added.

Expanding on that theme, the first panel discussed the provision of education, legal and health services in the U.S. to African immigrant women, and to the people of Côte d'Ivoire through the U.S. program PEPFAR (President’s Emergency Plan for AIDS Relief). Each speaker called for greater cultural competence in such programs. 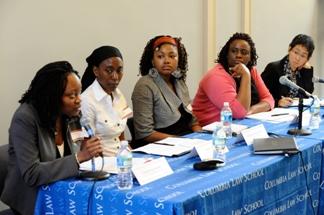 
Panelist Natasha Lashley-Johnson, now the director of education at the Reciprocity Foundation, began to address this need as a third-year law student when she launched a project to provide legal services to African women who were domestic violence survivors. Guiding her clients to security through the legal system was a challenge, because the U.S. system operates on principles that often seem contradictory to their cultural experiences and values.

“It’s very difficult to say to a client [for whom] everything is communal that you have to think about your safety alone,” Lashley-Johnson said. “Her uncle is not my client; her sister in France is not my client. My only [obligation] legally is to her.”

At the same time, Lashley-Johnson sought to help other involved parties, such as police, hospital staff, and judges, better understand each woman’s cultural background so that they could more effectively protect them.

The importance of cultural sensitivity was also addressed by panelists Alice Clomegah, who spoke about her role as coordinator of HIV services for the African Services Committee; Ramatu Bangura, who discussed her work with African immigrant teenagers in New York City through the Girls Empowerment Leadership Initiative at Sauti Yetu Center for African Women; and Professor Christine Cynn of Barnard College, who argued that the PEPFAR curriculum, even as it claims a mission of gender equity, uses stereotypes to suggest that culture, rather than economic factors and political violence, lead to the spread of AIDS.

At the final panel, “Transnational Africans: A Panel and Discussion on the Response of Africa’s Regional Powerhouses to Migration from Neighboring Countries,” Zachary D. Muburi-Muita, Permanent Representative of the Republic of Kenya to the United Nations; Safiu Olaniyan, Consul for Administration and Information, Federal Republic of Nigeria; and Moremi Soyinka-Onijala, Special Assistant to the President on Humanitarian and Migration Affairs of Nigeria, addressed the audience.

Ambassador Muburi-Muita asked, “How do African migrants participate in the economic development of their countries?” After all, he said, “more than 41 percent of Africans live below the poverty line, which is less than $1 a day.” He suggested that migrants who traditionally send money home to family members “could change the face of Africa” if they instead sent it home as funding for development. 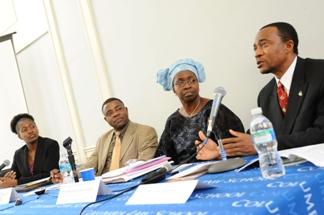 (Left to right) Mojoyin Onijala, ALSA chairperson and panel moderator; Zachary D. Muburi-Muita, Permanent Representative of the Republic of Kenya to the United Nations; Moremi Soyinka-Onijala, Special Assistant to the President on Humanitarian and Migration Affairs of Nigeria; and Safiu Olaniyan, Consul for Administration and Information, Federal Republic of Nigeria.

Onijala, the ALSA chairperson and panel moderator, asked if any could see a possible future of opened borders and unfettered movement of people between nations. The panelists generally agreed that national boundaries, while vestiges of colonialism, are not going away in the foreseeable future.

The dearth of attention to Africa within the legal profession that Onijala described in her welcome, and which other speakers highlighted, was echoed by Professor Peter Rosenblum ’92 in his closing remarks.

"The world beyond what was left behind in Africa when colonialism ended hasn't been taken seriously, here or in Africa," he said. 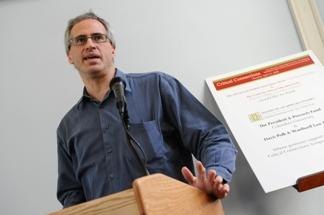 
Rosenblum, the Lieff, Cabraser, Heimann & Bernstein Associate Clinical Professor in Human Rights, has begun to address that with programming at Columbia Law School. For example, the Human Rights Clinic, which Rosenblum co-directs, has helped investigate and consult on government contracts between a number of African nations and mining and oil companies to create greater financial transparency and ensure that governments can obtain their fair share of revenue. Still, Rosenblum hopes to do more.

“We should be working on the possibilities of the opening up of Africa into our academic agendas,” he said.

ALSA, which already has begun planning for next year’s Critical Connections conference and anticipates that the annual event will gain visibility over the years, will help continue that work at Columbia.