Four Columbia Law School students faced off over a thorny set of constitutional and procedural questions before a panel of federal appellate judges at the 2017 Paul, Weiss Harlan Fiske Stone Moot Court Competition finals on April 4.

“You all were privileged to see four fantastic oral advocates,” said Millett, who asked some of the most challenging questions and joked afterward that family members in attendance might wonder why the bench was “so mean.”

The judges said the students did as well as some of the lawyers who appear before them in court and demonstrated the best of appellate advocacy, including: answering judges’ questions directly, conceding points when necessary, and pivoting back to their strongest arguments. 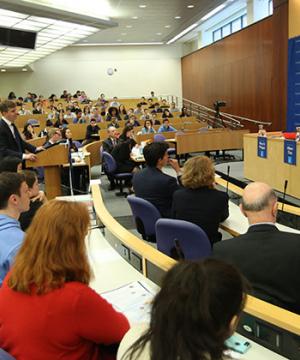 The judges also praised the case—written by Angelica Tillander ’17 and Chris Helwig ’17—which centered on domestic violence survivors’ claims that the governor violated their due process rights by removing the threat of criminal charges for their abusers. A fictional lower court certified a class of survivors but then granted summary judgment in favor of the governor. The governor claimed to have acted in an effort to save prosecutorial resources and eliminate racial disparities in law enforcement.

“One side had the equities; the other side had the law,” Murguia said after the competition. “It was really quite a matchup.”

Greenbaum Prize winner Gurian said “the state put countless women in great danger…all the while restraining their ability to protect themselves.”

But, later in the exchange, Millett countered that “the governor did what governors do”—attempt to make the best decision for the state as a whole.

She also pressed the other side, which argued the women couldn’t statistically prove they were more likely to be abused in the future because of the law.

“A 50 percent chance of a hangnail doesn’t seem so bad,” Millett began in a back-and-forth with Henseler. “But what if it were a 50 percent chance that you’d be murdered or that nuclear war would start? The fact that we’re talking about bodily violence… shouldn’t that be factored in… rather than the number-crunching you want us to do?”

After the competition, best brief winner Smith said she was “incredibly grateful” for the experience and that the judges pushed the students “further than we had been pushed before.”

Gurian added that “arguing before the panel was an exhilarating experience. I’m very proud to have participated in the finals alongside such talented oral advocates.”

The annual competition is named in honor of Harlan Fiske Stone (Class of 1898), who was dean of Columbia Law School from 1910 until 1924 when President Calvin Coolidge appointed him U.S. attorney general. Stone was appointed to the U.S. Supreme Court the following year and became chief justice of the United States in 1941.

The Harlan Fiske Stone Moot Court Competition is made possible by the generous support of Paul, Weiss, Rifkind, Wharton & Garrison.