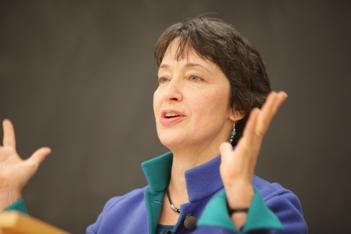 New York, March 19, 2012—Environmental Protection Agency Judge Catherine McCabe ’77 (above) returned to Columbia Law School on Feb. 22 to describe the trials and triumphs she has faced as a governmental environmental lawyer. She detailed the heated battles she has waged to protect the nation’s air, land, and water, and told an audience of students and faculty members that it has been fun— “if you like a good fight. . . . and I like a good fight.”

In her introductory comments, Ellen P. Chapnick, dean for Social Justice Initiatives, noted that McCabe has taken on many roles in public service—from trial attorney and environmental lawyer to legislative liaison, enforcement executive and judge. “All of which makes her very qualified to share her perspective on some of the exciting challenges that government lawyers have faced—and continue to face—as they serve the public by enforcing the nation’s environmental laws,” said Chapnick, who hosted the talk.
Although her initial foray into litigation was as a junior associate in private practice, McCabe spent 22 years in the U.S. Department of Justice’s Environment and Natural Resources Division and the last seven years in the Environmental Protection Agency (EPA), first as Deputy Assistant Administrator of the Office of Enforcement and Compliance Assurance and now on the other side of the bench.
McCabe placed her environmental legal work in the historical context of different eras on Capitol Hill and the White House. For instance, she described the 1980s as a halcyon time in which she helped establish the parameters of seminal environmental statutes enacted in the 1970s—from the Clean Water Act to the Resource Conservation and Recovery Act (RCRA) and the 1980 Superfund law, which govern the disposal of hazardous waste.
As with any statutes, these laws contained ambiguities, so McCabe and other lawyers wrestled with thorny issues, such as who pays for hazardous waste cleanup. “We did what all good government lawyers do,” she said, “We went to court and we made case law.” Case law victories often became the basis for new statutory provisions, ranging from 1986 Superfund amendments to new provisions in the Clean Water Act and the Clean Air Act.
Generous budgets and congressional support started to change in January 1995, McCabe recalled. The new Congress was much less sympathetic to an active governmental role and industry mounted more vigorous defenses on the Hill, as well as in the courts. “The attack on Superfund was particularly vicious,” she noted. The 1980 Superfund law—created to clean up and prevent hazardous waste sites like Love Canal—empowered the EPA to identify responsible parties, make them pay for cleanup, and tax the petro-chemical industry to pay for cleanups where polluters could not be identified.
McCabe remembered subsisting on late night Chinese takeout while preparing for hearings on Superfund’s renewal. Ultimately, Superfund’s taxing mechanism expired, but the law remains in effect.
Even so, McCabe told the audience about notable triumphs. She led and supervised a litigation team that brought major Clean Air Act litigation to clean up air pollution from coal-fired power plants, wresting settlements from American Electric Power and other large companies that paid billions to install pollution controls. Sulfur dioxide and nitrogen oxides emissions were reduced by millions of tons a year. When working on pollution control, “it’s particularly helpful and rewarding if you have a science/tech mindset,” advised McCabe, who drew on her Columbia Graduate School and Barnard College education in environmental science and management.
In addition to having some scientific background in subjects like pollution control and climate change regulation, environmental lawyers need to harness the power of data. McCabe proudly mentioned the EPA’s new efforts to make the information in its massive databases more accessible to the public, and said that distinguishing facts from myths is important when you’re dealing with the politically charged issue of environmental enforcement and compliance.
Yet, even buffeted by changes in Washington and challenges like the BP Gulf oil spill, McCabe told students, “The practice of environmental law for the government is as exciting and challenging as can be. I am hopeful for the future and grateful for the past.”