Long before intersectionality became a watchword, Florynce Kennedy ’51 identified the confluence of race and gender discrimination, bringing to second-wave feminism a Black voice that was impossible not to hear. But first, she took on Columbia Law School. 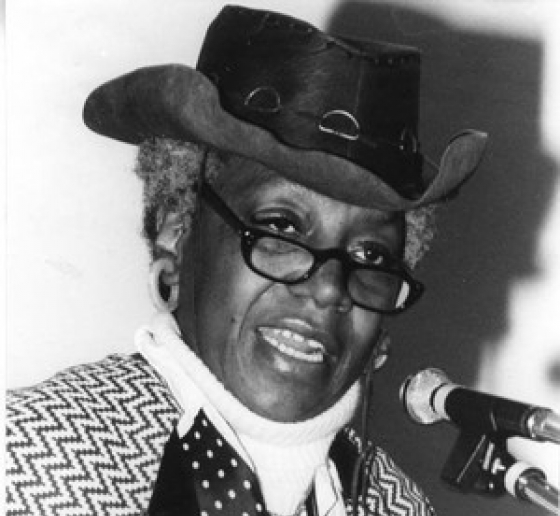 Florynce “Flo” Kennedy ’48 GS, ’51 LAW spoke out against racial and gender injustice during the protest-filled 1960s and ’70s. She was active in the civil rights and Black Power movements and in the fledgling National Organization for Women (NOW). She took on lightning rod cases, representing clients including the Black Panthers and the woman who shot Andy Warhol. When NOW became too mainstream for her, she founded the Feminist Party to support the presidential run of Rep. Shirley Chisholm in 1972. Like Bella Abzug ’45, Kennedy was fond of hats and almost always was photographed wearing a cowboy hat, sailor cap, or other headgear. She dressed to catch the eye, and she spoke in aphorisms designed to provoke. But her activism led to fundamental change, including New York becoming the first state in the nation to legalize abortion.

“I never stop to wonder why I’m not like other people. The mystery to me is why more people aren’t like me.”

Born in Kansas City, Missouri, on February 11, 1916, Kennedy grows up with a keen awareness of racism: From the family’s front porch, her parents faced down a mob of white men trying to force them out of the neighborhood.

As a member of the Kansas City NAACP in the early 1930s, Kennedy helps organize a boycott of a Coca-Cola bottler that won’t hire Black workers. In 1942, Kennedy and her sister Grayce refuse to leave a segregated restaurant at a bus station in Missouri. Flo is dragged out by a white crowd, which causes lifelong injury to her back. Later, she sues the bus company and the restaurant and obtains damages. In 1943, Kennedy moves to New York with Grayce and studies pre-law at Columbia University School of General Studies (then the Program of Undergraduate Studies).

Kennedy applies to Columbia Law School and is not admitted. In her 1976 autobiography, Color Me Flo: My Hard Life and Good Times, she relates that she had discovered she was rejected not because of her race but because she was a woman; she responded that “whatever the reason was, it felt the same to me.” Columbia agrees to reverse its decision, and Kennedy enrolls. In 1950, she joins the Women’s Law Society (now the Columbia Law Women’s Association), which tries to help the handful of female students find jobs at a time when the Columbia Law career services office would not send women on job interviews. After graduating, Kennedy takes a job assisting the bookkeeper at Hartman, Sheridan and Tekulsky, a small Manhattan law firm.

In 1954, Kennedy opens her own law office in Manhattan. She is one of 19 Black female lawyers in the state. She marries Charlie Dye, a science fiction writer 10 years her junior. In 1959, when Kennedy’s law partner absconds with the firm’s funds, Dye helps keep the law office running, but due to Dye’s alcoholism, their marriage is not a happy one; he dies shortly thereafter. Unsurprisingly, Kennedy is no fan of marriage: “Why would you lock yourself in the bathroom just because you have to go three times a day?” she says.

Winning Black Musicians Their Due

Kennedy represents singer Billie Holiday, ill with liver disease, on charges stemming from previous drug arrests. She is able to keep Holiday out of police custody while the singer is dying in a New York hospital. Kennedy then goes to court on behalf of Holiday’s estate and the estate of jazz musician Charlie Parker and successfully forces the musicians’ management and record labels to pay royalties owed.

Taking to the Streets

Kennedy shifts from lawyering to activism and begins her long career of public protests. “There began to be a serious question in my mind whether practicing law could ever be an effective means of changing society, or even of simple resistance to oppression,” she writes in her autobiography. To protest the lack of representation and jobs for women and Blacks in media, Kennedy founds the Media Workshop and organizes pickets of ad agencies and news organizations, including The New York Times and CBS. “I’m only interested in working on the pathology of the society as a whole,” she writes. “Because it takes as much time to get one ass out of the wringer as it does to try to stop the wringer.”

A founding member of NOW, Kennedy is a leading voice in the growing feminist movement and uses her sound-bite speaking style and her political theater skills to draw attention to women’s issues. To protest employment discrimination against women by consumer products company Colgate Palmolive, NOW members picket outside the firm’s headquarters in New York and pour cleaning products into a toilet. “There are very few jobs that actually require a penis or a vagina. All other jobs should be open to everybody,” Kennedy says.

Kennedy and William Kunstler ’48 defend Black Power movement leader H. Rap Brown (now known as Jamil Abdullah Al-Amin) on a gun charge, and Kennedy raises money and makes media appearances on his behalf. When writer Valerie Solanas shoots Andy Warhol and chooses to represent herself, Kennedy acts as her legal adviser. NOW condemns Solanas, but in court, and more successfully in the media and in the opinion of other womens’ groups, Kennedy casts Solanas’ attack as an act of radical feminist rage. (Solanas is sentenced to time in a psychiatric hospital and prison.)

Kennedy leads hundreds of women in a NOW protest at the Miss America Pageant in Atlantic City, New Jersey, decrying the pageant’s exploitation of women. The event makes the national news and, when the women throw bras and girdles into “freedom trash cans,” gives rise to the inaccurate but long-lasting characterization of feminists as bra burners.

Kennedy is among a group of female lawyers that challenges New York’s prohibition on abortion in federal court. The case, Abramowicz vs. Lefkowitz, is brought on behalf of hundreds of women who have experienced unplanned pregnancies and illegal abortions. Kennedy speaks at large Manhattan demonstrations demanding abortion access, and at an abortion rights rally at St. Patrick’s Cathedral, demonstrators hand out red coat hangers. “There is no need for any legislation on abortion just as there is no need for legislation on an appendectomy,” The New York Times quotes her as saying.

A Legal Victory for the Right to Choose

At a hearing before the federal panel, Kennedy requests that three female judges hear the case, although (as she knows) there is then only one woman on the federal bench in New York state. The lawsuit and protests influence the New York state legislature to legalize abortion (up to 24 weeks of pregnancy) in 1970, making New York the first state to do so. The next year, Kennedy publishes the book Abortion Rap with Diane Schulder Abrams ’60 GS, ’64 LAW, which contains testimony of women who have had illegal abortions.

Politics and the Podium

With Ms. magazine founder Gloria Steinem, Kennedy travels the country to give talks on college campuses. Men in the audience often ask the women if they are lesbians. “It depends,” Kennedy replies. “Are you my alternative?” Disenchanted with NOW for being too moderate, Kennedy founds the Feminist Party to support the 1972 presidential campaign of Rep. Shirley Chisholm, the first woman to run for the Democratic Party presidential nomination and the first African American to run in either party. Kennedy helps organize grassroots Black feminist groups. In 1973, Kennedy organizes a “pee-in” in Harvard Yard to protest the lack of women’s bathrooms in a building where exams are held at Harvard University.

Kennedy works with activist Margo St. James of COYOTE (Cast Off Your Old Tired Ethics) —who calls Kennedy her mentor—to advocate for decriminalization of prostitution and attends the United Nations’ International Women’s Year conferences in Mexico City to press the issue. “I think that neither the feminists nor the church nor the government nor anybody else has the right to say to women that they cannot choose whichever endeavor, for whatever reason, is best suited to their lives,” she writes in her autobiography. In New York, she begins hosting The Flo Kennedy Show on local access television, which runs until the early 1990s.

Kennedy publishes her autobiography, Color Me Flo: My Hard Life and Good Times, which, true to form, does not follow the usual conventions of the genre: It includes protest fliers, legal briefs, letters, and reproductions of newspaper articles as well as her own narrative of her life. “I’m just a loudmouth middle-aged colored lady . . . and a lot of people think I’m crazy,” she writes. “Maybe you do too, but I never stop to wonder why I’m not like other people. The mystery to me is why more people aren’t like me.”

After a long period of ill health, Kennedy dies in New York City at 84. The New York Times, which she had picketed decades before, quotes former Mayor David Dinkins: “If you found a cause for the downtrodden of somebody being abused someplace, by God, Flo Kennedy would be there.” 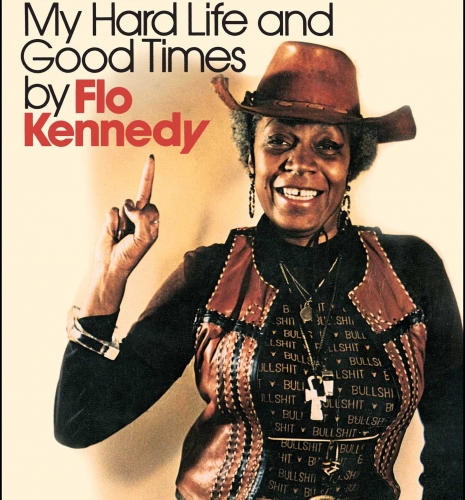