Ensuring the Right to Vote

This past Election Day, the Columbia Law School community played an important role in the voting process, teaming with Election Protection to ensure that both New York City residents and people across the country were able to exercise their right to vote.

Both in the field and at local call centers, Law School students, faculty members, alumni, and staff with legal backgrounds employed their legal training to answer questions, guide voters and poll workers, and report any issues so that they could be quickly resolved.

“It’s really important that everyone’s voice gets heard, and that there’s not a lot of confusion in the process,” said Adam Balin ’11, an associate at Davis Polk who served as a field worker on the Upper East Side for the Election Protection effort, his second time working with the organization on Election Day. “I wanted to be someone who was a resource, doing a small part to make sure everyone gets the chance to vote,” he added. “It’s one of the most important things in this country.”

Two more members of our community, Laren Spirer of Social Justice Initiatives and Kate Berry ’18, were able to share their first-person accounts of our community’s participation on Election Day. Please read on to find out more about the Columbia Law School/Election Protection experience.

I’ve been searching for a pro bono project that could involve members of the Columbia Law School community beyond students, and knowing that Columbia has participated in the Election Protection efforts in the past, I knew it could potentially be a great fit for students, graduates, faculty members, lawyers, and paralegal staff. Over 150 members of the CLS community expressed interest in participating, and many attended the field volunteer training run by Kahlil Williams ’11, currently an associate at Davis Polk. I, however, opted for a shift on the hotline. The hotline fielded calls nationally, but there were call centers at law firms in New York and D.C., with each center primarily handling calls from either one state or a set of states. I ended up at Davis Polk, where we were fielding calls from New York. 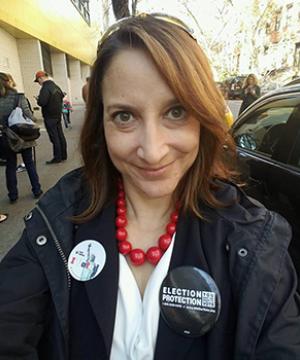 Before my shift, I completed an online training, giving examples of the types of issues I might face, where to find answers, what to do if I couldn’t find them, and how to log them into the overall Election Protection system. The two main goals of the hotline were to assist voters when they called and to track data and patterns, to see if there are grounds for more systemic work after the election.

I got up early to vote, and, wearing my Election Protection button, headed off to the polls. Upon seeing my button, I got a few questions from fellow voters, asking about how to confirm their registration and polling place. Once inside, looking at the swarms of people and trying to navigate the various tables and lines, I realized that even someone like me, who had voted in the same polling place several times, could encounter issues. For example, I received two ballots (I quickly returned one!).

After voting, I headed up to Davis Polk for my shift and immediately spotted colleagues I knew from the pro bono community, as well as colleagues from my former firm. After logging on to the system and taking a deep breath, I started answering calls.

Some calls were simple—voters asking about their current polling place, making sure they were registered—but more often than not, they weren’t that straightforward. Often voters had moved, neglected to change their voter registration, and wondered if and/or where they could vote that day. I also received several calls reporting extremely long lines and voting machine problems, including one polling place where a concerned voter told me that they were turning people away (rather than giving them emergency paper ballots as they should have done). All of this data was processed in the system, and urgent issues like equipment malfunction or voter intimidation/suppression were escalated immediately.

I talked to voters from all over the state, and it was frustrating when I realized that, for some, there was no way for them to vote due to missing key deadlines. Though I think New York and other states would be well served to allow early voting and day-of voter registration to avoid some of the more common problems I heard, it felt great when I could solve a voter’s issue and help them cast their vote.

I learned a great deal from the process, and one of the volunteers and I got into a discussion about ways to get basic voting information out to the public in a more concerted way. One recommendation would be subway, radio, and TV ads that provide information about how to register, important deadlines, and what to do if you move.

Overall, I’m eager to participate in Election Protection efforts for the next election, and was thrilled to help in what felt like a meaningful way. Many thanks to all from Columbia Law School who participated!

Hanna St. Marie ’18 greeted me with a grin at our pancake breakfast at Community Food & Juice on Amsterdam Avenue: “I love today,” she said. “Election Day is my favorite.” Over coffee, pancakes, and orange juice, we imagined our volunteer efforts for the day, reveling in the opportunity to advance our legal training—however minimal—outside the classroom and into some greater cause.

Hanna’s enthusiasm seemed widespread on the streets of Morningside Heights, and on the Facebook feeds, Instagram captions, and tweets of our classmates. Buoyed by our professors’ encouragement, and tacit permission from the Law School, CLS students rotated through shifts at polling places throughout New York City, ignoring—insofar as we could—our reading, journal notes, and clinic assignments in favor of protecting The Thing we came here to study and champion: justice.

Justice can be a running joke at law school: You realize quickly it does not actually exist in a grand Founding Fathers-esque vision of equality and liberty and other aspirational words. A pessimistic interpretation holds that we spend our three years (or, at least, our first) undoing any preconceived/Hollywood-produced notions of Justice with a capital J. We might arrive Atticus Finches, but we largely finish the first year exhausted curmudgeons, cynics believing that the perpetually correct cold call answer of “it depends” also applies to when justice is achieved.

Yet, Election Day felt like an opportunity to escape the limitations of acceptable cold call answers and realize justice in some meaningful way. Perhaps, this Election Day, we could be servants of Lady Justice on the streets of Harlem, Washington Heights, or the South Bronx. This could be the opportunity to put our law degree to work, beyond legal memos at our summer internships or hours of discovery as junior associates. This could be the chance to move beyond shaking our heads at Shelby County v. Holder during the professor’s 15 minutes of policy discussion.

Hanna certainly shared that enthusiasm with me, reflecting back on the day: “I fulfilled my civic duty as a law student,” she said. Other classmates felt the same, expressing an opportunity to use the privilege of a Columbia education to, however slightly, ensure a more fair election. Many of us saw the few hours we pounded the pavement as the obligation we owe in exchange for the tremendous fortunes we experience daily in Jerome Greene Hall. 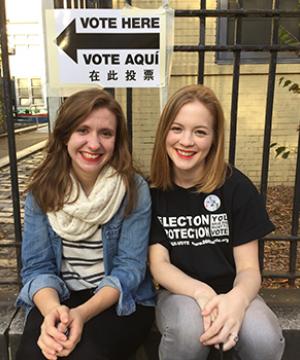 During Election Day, many of my classmates shared stories via text, email, and Facebook of the challenges they helped problem solve at the polls. One classmate assisted a large number of voters who were removed from the polls in Harlem—reminiscent of NYC primary election fiascos last spring—informing them of their right to cast an affidavit ballot. Another translated the ballot and voting instructions for an individual whose English was insufficient to vote, and for whom a translator was not available at the polling place.

For my part, my polling places ran smoothly, other than predictably long lines. Indeed, I felt at times the presence of my team may have had the opposite effect of what was intended. In East Harlem, given tensions heightened by this election, voters could have been apprehensive about three white Columbia Law School students monitoring a polling place. I hope that our work there was an asset to the voting process and eased any worry of intimidation there may have been prior to Election Day.

Another 2L noticed race from a different perspective, as she witnessed the distinction between the identification requirements and relative organization of a polling place serving racial and ethnic minority communities and her Upper West Side polling place, where even first-time voters were not asked for identification or proof of address, in contravention of New York voter laws. While she and I found this inconsistency depressing, another classmate noted the commitment she witnessed at her polling sites: “I saw hundreds of people patiently waiting to have their voice heard on the direction our country should take,” she said. “I spoke to voters excited to be able to vote for their first time, and others excited to vote in another important election. I saw kids learning what it means to be a citizen of the United States. I saw poll workers pulling 16-hour shifts to allow others to exercise their fundamental constitutional right.”

These stories, the depressing and the uplifting, remind me of the yet significant distance between justice and reality. As I reflect on Election Day and the results of this election, considering—apart from politics, insofar as I am able—what this means for law, justice, and the Constitution in this country, I am both depressed and inspired. In my afternoon shuffling between polling places in Harlem, I may not have used my nascent legal skills in any concrete way. (Indeed, anyone could have helped that voter find the handicapped entrance.) I did, however, witness the ephemeral something that I came to law school to understand and to promote.

Neither major presidential candidate emphasized “hope” much this election cycle, but I see it in spades: in the lines wrapped around the block, the exhausted polling staff, the stories of my classmates who donated hours to protection efforts in New York or knocked on doors in Pennsylvania or North Carolina to encourage voters to own their constitutional right.