According to Catherine E. Lhamon, chair of the U.S. Commission on Civil Rights, the United States still has a long way to go in living up to its ideal of equal opportunity in education. But much of the country’s progress can be credited to the work of Constance Baker Motley ’46, a Columbia Law School alumna who eventually became the nation’s first black female federal judge.

Lhamon delivered these remarks in her keynote address at Columbia Law School’s March 31 event, “The Legacy of Constance Baker Motley: Education, Equality, and the Law in the United States Today,” presented by the Columbia Law Review and Just the Beginning - A Pipeline Organization, which works to increase diversity in the legal profession. She also offered what she called “devastating” facts and case studies about the state of public education in this country, including that only 48 percent of high schools offer calculus (and only 33 percent of high schools with high numbers of black and Latino students do); that 1.6 million students attend schools that have a law enforcement presence but no counselor; that black students are nearly four-times more likely to receive out of school suspensions than their white peers; and that girls and women continue to face rampant sexual harassment and violence in school settings. 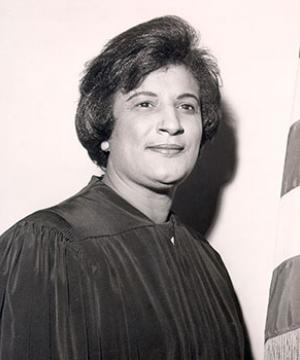 “We are not as far as we would like to be,” said Lhamon, who served as the assistant secretary for civil rights at the U.S. Department of Education until January of this year. But she said advocates should not lose hope or give up their efforts to create positive change. “Judge Motley saw, against the bleakest of obstacles, a path forward that was breathtaking in its scope. It is unquestionably true that the world Judge Motley made for us is materially different from the world she grew up in.”

Motley, an iconic civil rights attorney who worked on the Brown v. Board of Education case and represented James Meredith ’68 in his eventually successful quest to become the first student of color to attend the University of Mississippi, was appointed to the U.S. District Court for the Southern District of New York by President Lyndon B. Johnson in 1966. She died in 2005. In 2015, Columbia Law School unveiled a portrait created in her honor by the artist Samuel Adoquei.

Lhamon urged symposium attendees to pursue social justice for all, saying Motley took a risk in Brown, deciding to challenge “separate but equal” even though the U.S. Supreme Court had already upheld that notion in Plessy v. Ferguson in 1896.

“She did it anyway; in common parlance, ‘she persisted,’” Lhamon said. “There is value in proceeding, and it is worth doing and doing well.”

The symposium also included panel discussions about Motley’s judicial decision-making, lawyering, and identity; the role of the legal academy and legal institutions in bringing about social change; how the U.S. civil rights frameworks must change to achieve equality of opportunity; and the best path forward for addressing education inequality through the law.

Other speakers participating in the symposium were:

Each panelist is writing a piece for the November 2017 issue of the Columbia Law Review.

The symposium was inspired by a conference Just the Beginning held this past fall in honor of the 50th anniversary of Motley’s appointment to the federal bench, and it was sponsored by a grant from The Harold Leventhal Memorial Lecture Fund.