Don Liu ’86, the son of immigrants from South Korea, enrolled at Columbia Law School determined to develop the skills to become an effective civil rights leader. “I wanted to be the first Asian-American Martin Luther King Jr.,” said Liu at the fourth annual Columbia Law School Alumni of Color Talk and Reception on January 24, held at the InterContinental New York Barclay hotel. “I really wanted to save the Asian-Americans from many of the sufferings that my parents suffered,” he told the more than 100 alumni, professors, and students in attendance.

Like many students who are the first in their family to go to law school, Liu graduated with significant debt. He took a job in Big Law so he could repay his loans before pursuing a civil rights career. But after getting married and having children, he realized that supporting a family on the salary of a public-interest lawyer would be a challenge. “And that’s how I ended up selling out,” he quipped in his humorous and heartfelt keynote address, which was accompanied by a slide show of personal photos that illustrated his American odyssey from junior high in Cherry Hill, New Jersey, to the soccer team at Haverford College, to graduation from Columbia, to the recent creation of the Don H. Liu Scholars Program by two past presidents of the Asian American Bar Association of New York.

Liu has deftly managed a meteoric corporate law career while maintaining his commitment to advocating for minorities. “Don is an inspiration to our community,” said Gillian Lester, Dean and the Lucy G. Moses Professor of Law, in her introduction to his talk. “His career has taken him from private practice to some of the most successful corporations, and his long-standing commitment to supporting and mentoring young lawyers, particularly in the Asian-American legal community, is a shining example of the best of Columbia Law.”

Dean Lester also encouraged the attendees to contribute to the Eric H. Holder Jr. Scholarship Fund for minority students that was conceived at the inaugural Alumni of Color gathering in 2016.

Prior to joining Minneapolis-based Target in 2016 as executive vice president and chief legal and risk officer, Liu had held an impressive series of leadership positions as in-house counsel for Xerox, Toll Brothers, and Aetna. In 1999, when he was appointed general counsel for IKON Business Solutions, he says, journalists kept asking him, “Why are you the only Asian-American GC at a Fortune 500 company?” Liu couldn’t answer that question, and since then, he has devoted tremendous time and energy to working with Asian-American lawyers to advance their careers.

Liu noted that Asian-Americans are undermined by what many consider harmless stereotyping. “We’re often mischaracterized as the model minority because fairly large numbers have gotten into top schools” he said. Yet some Asian-American communities also are among the poorest in the country, with undereducated populations that are woefully lacking in access to health care and social services.

Liu expressed frustration that though Asian-Americans are the largest minority group represented among the top 250 U.S. law firms, in New York City the rate at which those associates convert to partners is lower than for black or Hispanic lawyers. He says that implicit bias on the part of firm leaders often holds junior Asian-American associates back because they are characterized as “worker bees but not great leaders.” Working with the National Asian Pacific American Bar Association (NAPABA), Liu is training Asian-American lawyers to refute this image. He has spearheaded a program with NAPABA that brings more than 100 rising Asian-American legal stars to New York every summer to teach them “soft skills” such as how to navigate a cocktail reception when you don’t know anyone and how to position yourself at a meeting when you feel you are being ignored. “It’s soft skills that make a difference between whether you’re a partner or law firm associate, whether you’re a general counsel or corporate counsel at a company,” he said.

Looking out at his diverse audience, Liu explained that developing and honing those skills does not mean creating a false front to advance your career. All lawyers should ask themselves the same question, he said: “Do you feel like you can go to the office and be your authentic self? If the answer’s yes, then you are probably going to do pretty well.”

In recognition of his service to the Asian Pacific American legal community, Columbia’s Asian Pacific American Law Students Association will honor Liu with the Hong Yen Chang award at a dinner at Low Library on February 23. The award is named after the Columbia Law School graduate who is believed to have been the first Chinese immigrant licensed to practice law in the United States. 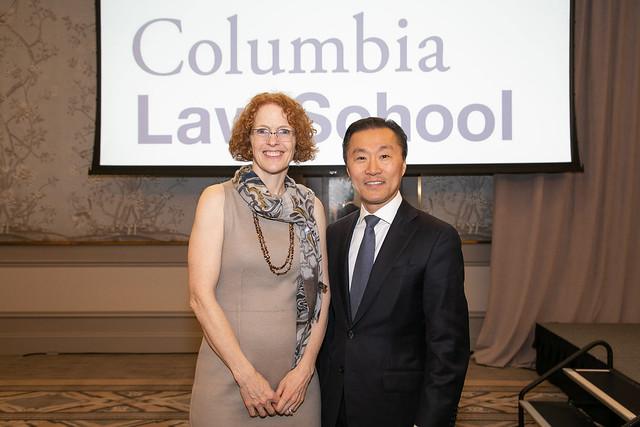 Alumni of Color Talk and Reception 2018

The 2017 Alumni of Color Reception