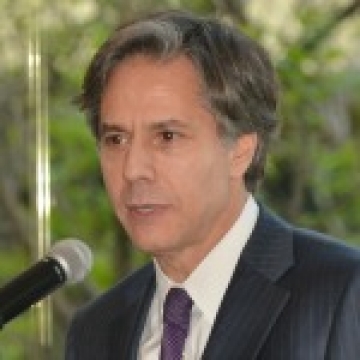 Blinken also talked about the importance of public service and took questions from attendees who included graduates from the past five decades. He noted other prominent alumni in the diplomatic corps who were present, including Ambassador Brett McGurk ’99, deputy special presidential envoy for the global coalition to counter ISIL and deputy assistant secretary for Iraq and Iran; and Daniel F. Feldman ’93, special representative for Afghanistan and Pakistan. Also in attendance among the dozens of distinguished alumni was Nina J. Luzzatto Gardner ’86, director of consulting firm Strategy International and the daughter of Professor Emeritus of Law and International Organization Richard N. Gardner, former ambassador to Italy and Spain.
Columbia Law School Association President Claire Woods ’11, a U.S. Department of Justice trial attorney, kicked off the gathering at the Sequoia Restaurant. Professor Matthew C. Waxman, faculty co-chair of the Roger Hertog Program on Law and National Security and adjunct senior fellow with the Council on Foreign Relations, introduced Blinken. Waxman has held senior positions at the U.S. Department of State, Department of Defense, and National Security Council. Dean for Social Justice Initiatives Ellen P. Chapnick and Director of Government Programs Rachel Pauley were also in attendance.
Before Blinken was confirmed by the U.S. Senate to his current post in December, he served as assistant and deputy national security adviser to President Obama, and earlier as national security adviser to Vice President Joe Biden. From 2002 to 2008, Blinken served as staff director for the U.S. Senate Foreign Relations Committee. He was also a senior fellow at the Center for Strategic and International Studies. During the Clinton administration, Blinken served on the National Security Council staff as special assistant to the president and senior director for European affairs, as well as special assistant to the assistant secretary of state for European affairs at the U.S. Department of State.