Columbia Law Professors Eric Talley and Joshua Mitts discuss how machine learning, AI, and data analytics are transforming the practice and study of the law. 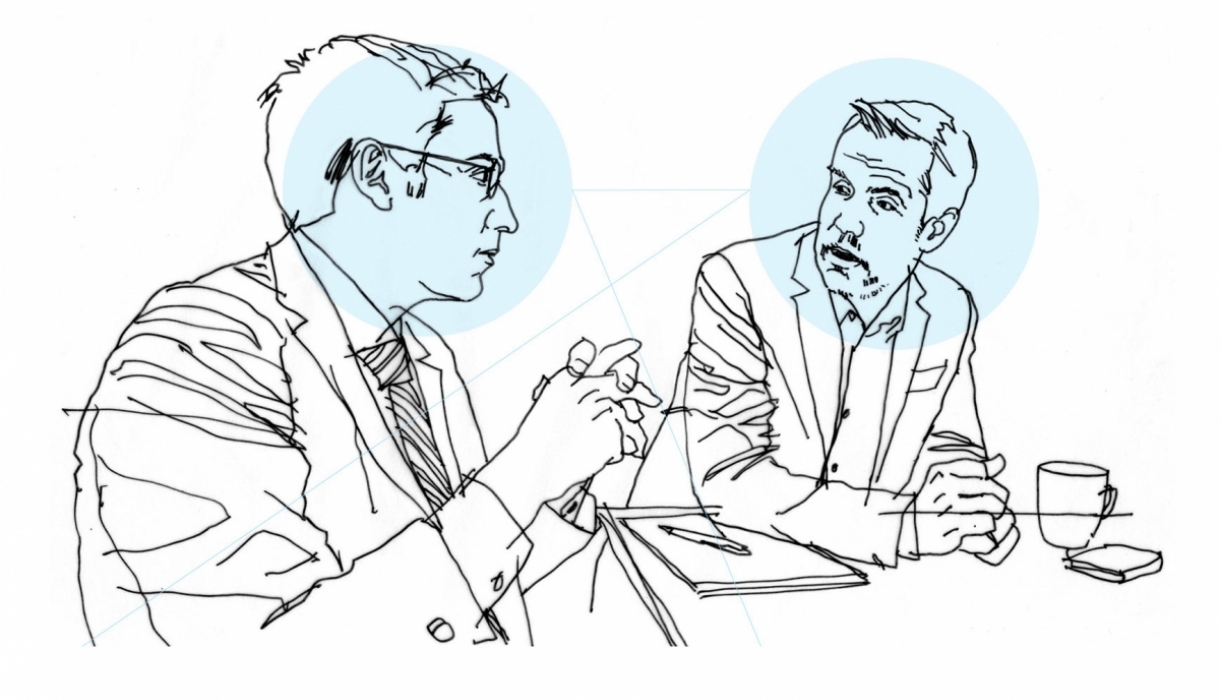 A revolution is underway in the legal world as powerful artificial intelligence (AI) technologies are redefining what it means to be a lawyer. Using machine learning, lawyers can now rapidly review and analyze complex deals and even predict how judges will rule.

For Columbia Law Professors Eric Talley (above, right) and Joshua Mitts (left), all this presents exciting opportunities—but also hard questions about a future in which justice could be meted out by algorithm.

Talley and Mitts are at the forefront of a scholarly movement to use machine learning—which can be loosely defined as computers learning without explicit instructions—to understand the law.

This task relies on computers, of course, but a critical first step is to curate a large collection of legal text to train the computers. “This calls for a more imaginative idea and creative conception of what constitute data,” said Talley.

The professors are applying machine learning in their own research by training programs to find patterns and predict outcomes in anything from litigation to regulatory compliance. Talley and Mitts teamed up and employed this technique to assess thousands of corporate SEC filings; a machine-learning tool uncovered a pattern of traders quietly selling stock before cyberattacks were disclosed to the public. In the private sector, law firms are using software to parse millions of pages of documents in search of evidence to use at trial.

Using data samples to understand the law is not new, of course. Legal scholars have deployed statistics and other quantitative tools since the first half of the 20th century, and services like Westlaw and LexisNexis have long developed software that analyzes pools of cases to find on-point precedents. Today, however, researchers can carry out in hours or minutes an empirical analysis that once took months.

Learn about Talley's research examining self-driving cars and the law.

As machine learning opens new directions for legal scholarship, it’s also disrupting the practice of law. Mitts and Talley see technology less as a threat and more as an opportunity for law students and enterprising lawyers. “You can think of it as breaking up the cartel of law firms that have locked up so much experience in the partners’ minds,” says Mitts. “If I can comb through 10,000 deals at the click of a button, I don’t need to ask a law firm partner who has done 500 of them for his opinion.”

Mitts thinks the proliferation of machine learning tools will enable ambitious lawyers to carve out a wide variety of business niches, such as wills or landlord-tenant disputes and will open up new markets—including in poorer communities traditionally underserved by the legal industry.

Law students, meanwhile, should anticipate a profession that is increasingly powered by data and analytics. Mitts says students should learn the basic language so that they can collaborate with engineers and programmers. “The people who are succeeding at deploying AI in the legal field, by and large, are not the engineers,” says Mitts. “They are the lawyers. Even if you were an English major, you can pick up enough of these skills to hire and work with the engineer.”

Listen to Talley and Mitts discuss how law students should be prepared to practice in the age of AI.

The arrival of powerful AI technology into the legal world brings convenience and insight, but also risks undermining the ideal of justice administered by humans. Citizens, for instance, might lose trust in the impartiality of courts if they learn that data can be used to predict rulings in advance. The time may come when people ask, as they already do of baseball umpires, if judges should be replaced by a technology that is not subject to bias or emotion. But Talley says this notion that lawyers will one day need to “yield to our future digital overlords” is misguided.

“If the practice of law consisted solely of putting a bunch of associates in a room to do due diligence, get ready because machine learning has already overtaken much of that,” he says. “But what it’s not going to overtake is which decisions you make based on that information.”

Machine learning may be very good at making predictions, he adds, but the common law fosters an element of unpredictability that will always remain very much human. Unlike a game of chess, where the rules never change, interpretations of settled law can abruptly shift, most conspicuously as a result of Supreme Court rulings. Such shifts in the law often coincide with new political currents and changes in society—the unscripted evolutions of the social order that machine learning is slow to recognize. For now, human lawyers still have the upper hand.

Mitts and Talley discuss the implications of the law becoming “machine predictable."

Joshua Mitts, an associate professor of law who also has a Ph.D. in finance, teaches corporate and securities law. Last year,  he taught a one-week elective on coding and analytics as part of Columbia’s pilot January term. Prior to law school, Mitts worked as a software developer. He is an affiliated member of the Center for Financial and Business Analytics at Columbia’s Data Science Institute.

Eric Talley, the Isidor and Seville Sulzbacher Professor of Law, holds a Ph.D. in economics. He is a co-director of the Ira M. Millstein Center for Global Markets and Corporate Ownership and an Executive Committee Member of Columbia’s Data Science Institute.

Jeff John Roberts has written about technology and the law for Reuters, The New York Times, and Fortune. He has a J.D. and Bachelor of Civil Law from McGill University and an M.A. from Columbia Journalism School.