The Debate over Arizonas Immigration Law: Necessary or an Excuse for Racial Profiling?

The Debate over Arizona?s Immigration Law: Necessary or an Excuse for Racial Profiling?
Media Contact:
Public Affairs Office, 212-854-2650 [email protected]
New York, Nov. 1, 2010—Provisions of the controversial Arizona immigration law are on hold while proponents this week appealed U.S. District Judge Susan Bolton’s July injunction that blocked implementation of its toughest provisions.
However, debate over the legislation, known as SB 1070, rages on between proponents who say it’s needed to clamp down on an epidemic of illegal immigration, and civil rights advocates who argue it encourages discrimination and amounts to racial profiling.
That battleground was mapped out further in a recent debate at Columbia Law School between Nina Perales ’90, National Senior Counsel at the Mexican-American Legal Defense & Education Fund; and Heather Mac Donald, John M. Olin Fellow at the Manhattan Institute for Policy Research, a conservative think tank.
The debate was sponsored by the new Columbia Journal of Race and Law, as part of its inaugural symposium on immigration and civil rights. 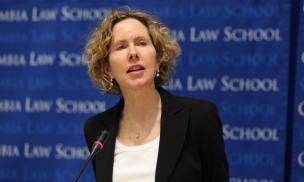 “I don’t believe Judge Bolton’s ruling will stand on the merits,” MacDonald, left,  said. A federal appeals court in San Francisco is to hear arguments Monday to lift the injunction. It blocked the parts of the law that required local authorities to check the immigration status of those they suspect to be illegal aliens and the status of anyone in custody in Arizona before they are let out of jail. Perales agreed with Bolton’s conclusion that the enjoined provisions of SB 1070 are preempted by federal law.
MacDonald said SB 1070 would only be triggered if a person is stopped for another alleged offense and an officer has a “reasonable suspicion” that person may be in the country illegally.
“The reasonable suspicion standard is a traditional standard for law enforcement. It is the same one that federal agents operate under,” MacDonald said.
Perales said local police would be able to form a reasonable suspicion that certain Latinos—who make up 25 percent of Arizona’s population—lack authorization to be present in the U.S., based solely on sight, as the law requires.
“SB 1070 puts local police officers in an impossible position and diverts police resources away from their priorities,” she said. “And for those cops who really don’t have the best of intentions, it causes them to get out there and stop people when they shouldn’t,” said Perales, who views the law as a “very strong attack on the civil rights of Latinos.”
At her San Antonio office, Perales, right, said she and her colleagues are used to getting a lot of hate mail that often winds up telling them to “go back to Mexico” where they came from.
“It’s hard,” she wryly noted. “I was born in Jackson Heights.” 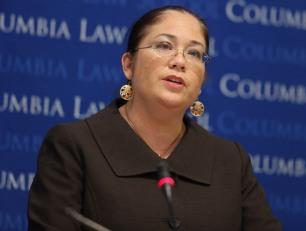 Perales and MacDonald also split on Bolton’s ruling that the Arizona law was pre-empted by federal law, which gives the executive branch exclusive control over immigration policy.
“You would never know from reading the legal analysis that there are 12 million illegal aliens in the U.S. and half a million in Arizona,” MacDonald said. “Right now, federal immigration agents are hugely overmatched by the number of illegal aliens in the country. If SB 1070 were widely copied in other sates, it would create a local force multiplier for scant federal resources.”
However, Perales said it isn’t that simple.
“It creates state punishments for state-created immigration offenses, and then maximizes the questioning of anybody,” Perales said of the law. “The purpose of the law is to bypass federal law enforcement.”
The debate was co-sponsored by the Law School chapters of the Federalist Society and the American Constitution Society.
Columbia Law School, founded in 1858, stands at the forefront of legal education and of the law in a global society. Columbia Law School joins its traditional strengths in international and comparative law, constitutional law, administrative law, business law and human rights law with pioneering work in the areas of intellectual property, digital technology, sexuality and gender, criminal, national security, and environmental law.
Visit us at http://law.columbia.edu
Follow us on Twitter http://www.twitter.com/columbialaw