After clawing its way back from a 12-point deficit, Columbia Law School’s basketball team fell short in the final minute, losing the sixth annual Deans’ Cup to NYU School of Law, 68-65, in a hard-fought game before an estimated 1,500 impassioned spectators at NYU’s Coles Sports Center.

Down by a dozen midway through the second half, Columbia went ahead thanks to an inspired play by Andrew Lyle ’09, Justin Waldie ’09, and Kim Mellem ’07, who secured the lead on a three-point bomb with a little more than two minutes to play.

But NYU wouldn’t be denied as guard JP Kernisan took control of the game, scoring four points in the last minute to ice the game for the Violets, who now lead the Deans Cup series, 4-2.

"It took us a while to get going," said Waldie, who played at the University of Chicago. "We’ll be back next year."

All was not lost for Columbia in the defeat. The benefit game raised $105,000 to support students exploring careers in public interest law, with the proceeds split between Columbia’s Public Interest Law Foundation and NYU’s Public Interest Law Center. The money helps ensure that Columbia students who want to explore the field during the summer are guaranteed a stipend. Students organizing the event had a first-hand experience in fund-raising as they solicited donations from Manhattan law firms, including Sidley Austin and LaBoeuf, Lamb, Greene & MacRae.

The loss was tempered by the Columbia Law faculty’s victory, by a score of 7-6, during a 10-minute halftime game. Sealing the victory for Columbia was a short jumper by Professor Timothy Wu. Team captain Michael Dorf connected on a three-pointer to lead the faculty scoring. Professor Suzanne Goldberg, who directs Columbia’s Sexuality and Gender Law Clinic, was pleased with the faculty’s victory and her own survival. 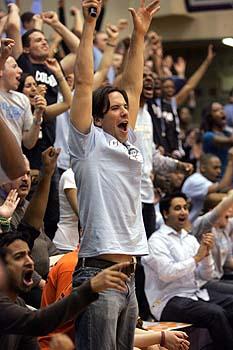 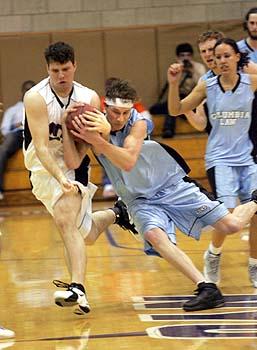 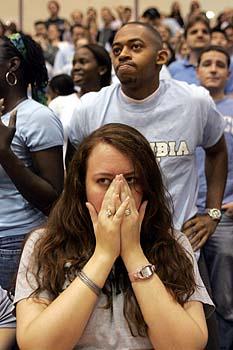 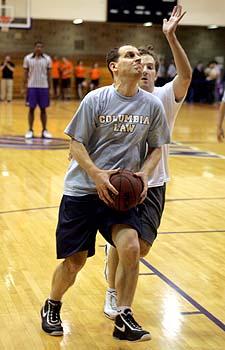 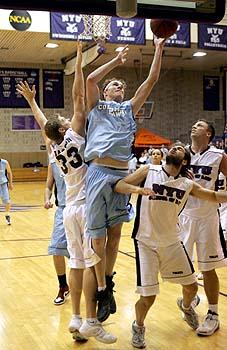