New York, NY (April 3, 2003) - Amidst the mayhem of the NCAA, a different kind of college basketball tournament caused a stir in New York City on April 2, 2003 - the annual Deans' Cup. Columbia and NYU law school students started the competition last year to raise funds for public interest law projects and community service organizations on both campuses.

Although Columbia Law School emerged as the victor on its home turf in the inaugural student and faculty games in 2002, CLS lost to NYU by a close margin (37-35) in this year's student game held at NYU's gymnasium. However, Columbia Law School faculty caused a sensation when star player and co-captain, constitutional law professor Michael Dorf, stunned the crowd in the last second of play with a breathtaking turnaround shot. Columbia Law students were so delighted that they stormed the court. 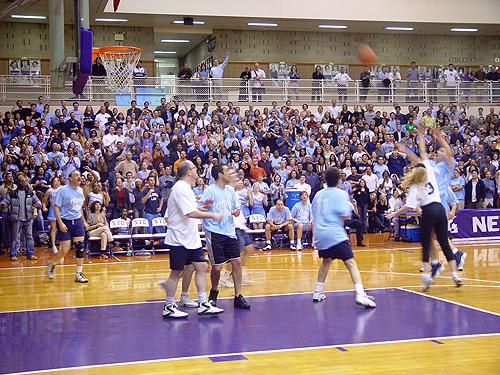 At the conclusion of this 2003 competition, student organizers announced that $35,000 was raised through sponsorships and ticket sales, which will be split between public interest organizations at the two schools.