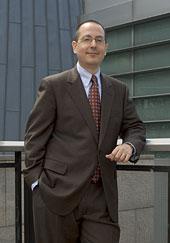 New York, NY -- June 21, 2004 -- David M. Schizer, a 35-year-old Columbia Law School professor, has been named the 14th Dean of the School by Columbia University President Lee C. Bollinger.  He is the youngest dean of the nation's top law schools.

"David Schizer is a person of exceptional talent and character. Indeed, the very qualities that have made him a phenomenal teacher will make him an equally successful dean," said Bollinger, himself a 1971 graduate of the School. "Under his leadership, the Law school will continue to provide a rigorous legal education and to serve as one of the world's leading centers for legal scholarship and practice."

Schizer will succeed David W. Leebron, who has accepted an appointment as president of Rice University after a successful eight-year run as Columbia Law's dean.

"The Law School faculty conducted an exhaustive search to find a worthy successor to David Leebron," said Michael C. Dorf, chair of the law faculty's dean search committee.  "David Schizer's combination of cutting-edge scholarship and extensive connections to the professional bar have earned him the respect of colleagues many years his senior."

More than perhaps any other scholar, Schizer has studied the influence of tax on corporate governance.  Schizer's work has provided government officials with theoretical and technical advice about how to curtail unfairness in the taxation of investments.

Schizer was born in Brooklyn, New York, to Columbia Law graduate Hazel Gerber Schizer, '59, a family and estates lawyer, and Zevie Schizer, a securities lawyer.   After receiving a B.A. and M.A. in history and a subsequent law degree from Yale, Schizer clerked for U.S. Court of Appeals Judge Alex Kozinski and Supreme Court Justice Ruth Bader Ginsburg, '59.  An interest in business and statutory analysis led him to the tax department of Davis, Polk and Wardwell in New York, where he practiced law before joining Columbia Law School in 1998.

At Columbia Law, Professor Schizer is the Wilbur H. Friedman Professor of Tax Law.  He has taught federal income taxation, the taxation of financial instruments, corporate tax, and a special course on "deals."  Schizer's scholarly work has appeared in prestigious law journals, and in 2002 he was awarded the School's Willis L.M. Reese Prize for Excellence in Teaching.

About Columbia Law School:
Columbia Law School, which was officially founded in 1858, is among the very top tier of law schools in the United States, and is continuing its transition from a national leader to a global leader in legal education and scholarship.

About Columbia University:
Columbia University in the City of New York is one of the top academic and research institutions in the world, conducting path-breaking research in medicine, science, the arts, and the humanities. It includes three undergraduate schools, 13 graduate and professional schools, and a school of continuing education. Seventy Nobel laureates have taught or studied at Columbia. Each year, the faculty of approximately 4,000 teaches more than 23,000 students from more than 150 countries.

Over the years, Columbia has played a critically important role in New York City as an intellectual leader and as a partner to numerous institutions in the sciences, arts, and public policy. Now marking its 250th anniversary, Columbia continues to be the quintessential urban university, a vibrant and involved intellectual and social community dedicated to learning and to the advancement of knowledge.