ABC News "Nightline" co-anchor Cynthia McFadden ’84 realized she was "not cut out to be a lawyer" while at law school. During a civil procedure class, she asked the “iconic” Professor Hans Smit ’58 why a particular rule existed.

"Why?" Prof. Smit asked. "Why, Miss McFadden, is never an appropriate question in this classroom."

But it was the "why" questions that most fascinated her and led her to a very successful career in journalism. Ms. McFadden spoke about her career and its challenges as the keynote speaker at the 2007 Myra Bradwell Banquet.

Ms. Bradwell was another woman who asked “why?” After passing the Chicago bar association admission test in 1869, she was denied entry because, as a married woman, she could not enter legally binding contracts. She fought for decades to reverse the ruling, which did not occur until 1892.

“What I did not know [about Myra Bradwell] … was what she did in those intervening years. She was a journalist,” said Ms. McFadden, who began her career at ABC in 1994 as its legal correspondent and has won a slew of awards for reporting. 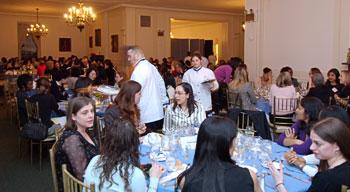 Ms. McFadden focused her talk on the difficulties women face as journalists. In addition to the long hours that make having a family difficult and the fierce competition among colleagues, a big challenge is that so-called “hard news” has traditionally been the province of men, even though “soft” news is not so different, she said. Citing her work on an hour-long investigative story about a street prostitute, she said, “I am proud of those occasions when I have been able to give a voice to those who otherwise wouldn’t have one.”

Ms. McFadden also illustrated how female reporters are judged by a different standard than men. When she interviewed movie star Angelina Jolie on an eight-minute segment on “Nightline” from the World Economic Forum, a Columbia University journalism professor found her choice of guest inexcusable. Ms. McFadden asks, So why was it acceptable for her colleague, George Stephanopoulos, a year earlier, to devote a half-hour on “Nightline” to Ms. Jolie and her advocacy for children?

“Of course it was different. A man had done it,” Ms. McFadden said.

“Traditional coverage is not the only way to look at things,” she added. Covering the debate in Congress about the minimum wage is considered hard news, but following a family trying to live on minimum wage is not. “My point is that we don’t need to choose between one or the other,” she said.

She added she was optimistic that women will have more of a say in future news coverage and that they will be the ones sent to cover choice assignments. 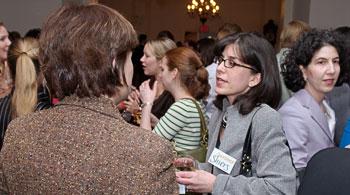 Asked by an audience member how she had coped with sexism, she paused, choosing her words with lawyerly precision. “I have chosen to be largely unaware of the limitations put upon me because I’m female,” she said. A moment later, she added, "Or maybe it’s that I was just too dumb and pig-headed to see it."